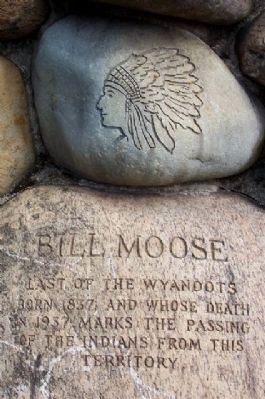 Photographed By William Fischer, Jr., March 15, 2009
1. Bill Moose Crowfoot Memorial
Inscription.
Bill Moose [Crowfoot]. . , Last of the Wyandots. , Born 1837 and whose death in 1937 marks the passing of the Indians from this territory., Engraved by Zenker Brothers . This historical marker is in Upper Arlington in Franklin County Ohio

Last of the Wyandots.
Born 1837 and whose death in 1937 marks the passing of the Indians from this territory.

Topics. This historical marker is listed in these topic lists: Cemeteries & Burial Sites • Native Americans • Settlements & Settlers. A significant historical year for this entry is 1837.

Location. 40° 2.775′ N, 83° 5.668′ W. Marker is in Upper Arlington, Ohio, in Franklin County. Marker is on Riverside Drive (U.S. 33), on the right when traveling north. Memorial is in Wyandot Hill Park, about 700 feet south of US 33 intersection with Lane Road (not to be confused with Lane Avenue), which is about halfway between Fishinger and Henderson Roads. Touch for map. Marker is in this post office area: Columbus OH 43220, United States of America. Touch for directions. 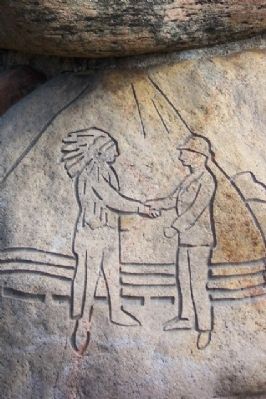 Regarding Bill Moose [Crowfoot]. Bill Moose was the last of the Wyandot Indians in Ohio. He was born in 1837 eight miles north of Upper Sandusky and died just short of 100 years of age in 1937. He came from a family of long-lived relatives. His father died at the age of 100 in 1871 and his mother died at the age of 106 in 1872.
During his father's lifetime there was a camp of 400 Wyandot Indians in Upper Sandusky. Chief Pancake was the last chief of the tribe in this territory. The Wyandot Indians ultimately left their Ohio reservations, and moved in 1836 to Kansas, and then later to Oklahoma. However, 12 families including Bill's parents, refused to leave Ohio.
Bill Moose spent nine years working for the Sells Brothers Circus, going to many places in America, and also into Canada and Australia. He never married.

For many years he lived in a little hut on Morse Road (near the present Wyandotte Golf Course). He was known by his wardrobe and could be seen wearing his blanket and headdress, which became a familiar 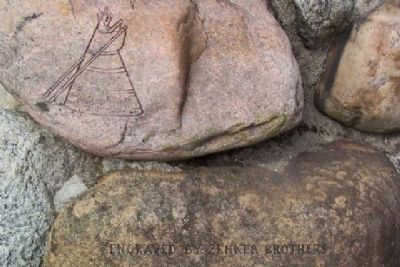 Photographed By William Fischer, Jr., March 15, 2009
3. Teepee Engraving on Bill Moose Crowfoot Memorial
"Engraved by Zenker Brothers"
and friendly reminder of his heritage when seen by local citizens. He sold trinkets, post cards and posed for pictures for some income. He also taught children Indian crafts, making bow and arrows and passing on Indian tales. He would fish, hunt and literally live off the land. Due to failing health, for the last seven years of his life he moved into the Franklin County Home.
Land was donated by the City of Columbus for Bill Moose's burial site. When Bill Moose died in 1937 he was buried by the Scioto River in full ceremonial fashion. This included a sacred death necklace of eagle claws given by the Blackfoot tribe and a pair of burial moccasins, which his people believe, help speed the journey to the “Happy Hunting Ground".
His tombstone consists of 39 granite boulders standing altogether at just over 9 feet tall. The boulders used in the monument actually came from the riverbed. The boulders were then sanded and put together to form a teepee. On the top boulder there is an image of an Indian and a white man shaking hands.
One thousand people witnessed the dedication service to Bill Moose. He shall always be remembered as the last of the Wyandot Indians in Ohio. 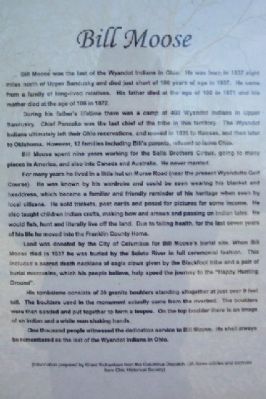 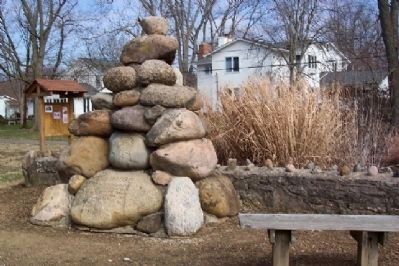 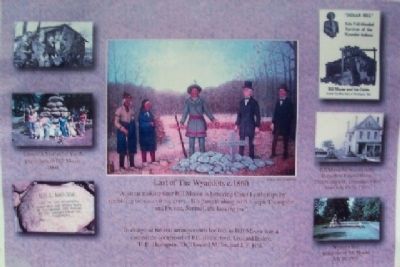 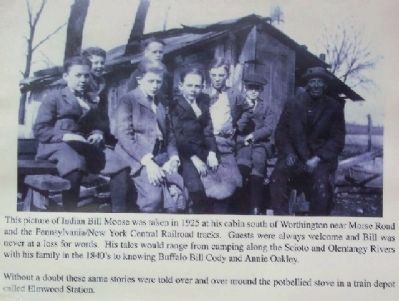 Photographed By William Fischer, Jr., March 15, 2009
7. Bill Moose [Crowfoot] Photograph
This picture of Indian Bill Moose was taken in 1925 at his cabin south of Worthington near Morse Road and the Pennsylvania/New York Central Railroad tracks. Guests were always welcome and Bill was never at a loss for words. His tales would range from camping along the Scioto and Olentangy Rivers with his family in the 1840's to knowing Buffalo Bill Cody and Annie Oakley. Without a doubt these same stories were told over and over around the potbellied stove in a train depot called Elmwood Station. [Photo posted on kiosk next to memorial] 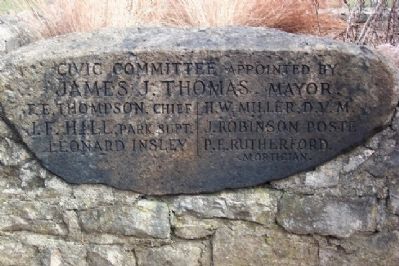 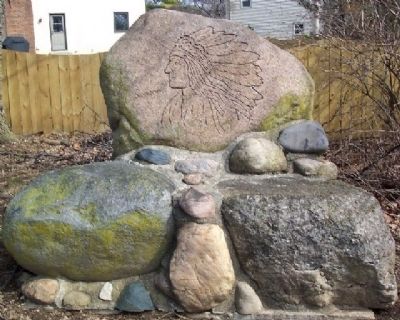