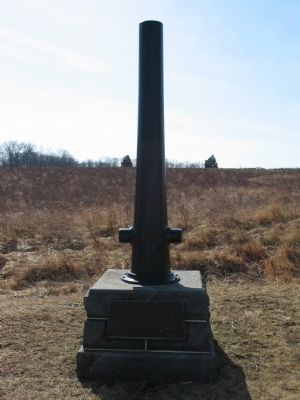 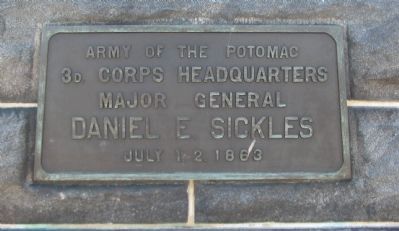 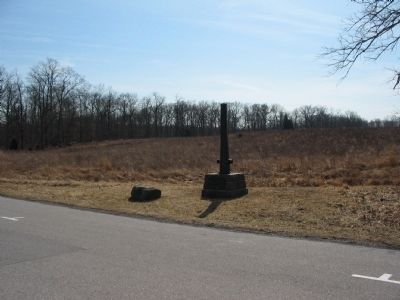 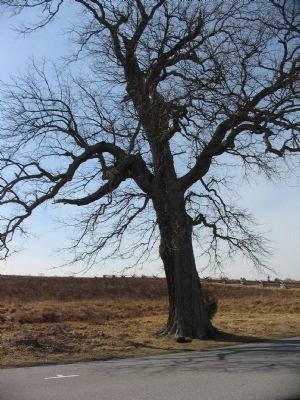 By Craig Swain, February 21, 2009
4. General Sickles Witness Tree
A tree standing beside the marker is one of many at Gettysburg designated a "witness tree." The tree stood at the time of the battle. This photo was taken in winter when its leaves were gone. But it quite possible that General Sickles enjoyed its shade on that summer day in July 1863. 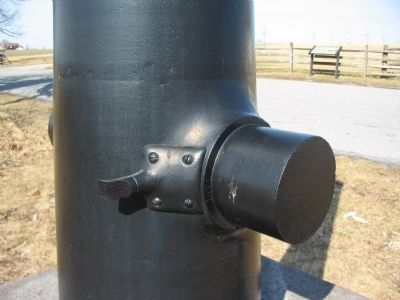 By Craig Swain, February 21, 2009
5. Sight Bracket and Foundry Number
On the trunnions of the cannon, just below the sight bracket is a number - 1671. This was the manufacturer's serial number, matching to the Ordnance Department's registry number 80. This 4.5-inch Siege Gun, Model 1861, commonly noted as an "Ordnance Rifle" due to its design, was produced by Fort Pitt Foundry, Pittsburgh, Pennsylvania, in 1863. It was inspected by Charles Peoble Kingsbury before issue. At manufacture it weighed 3,577 pounds. No guns of this type were present at the battle, although two batteries using these guns were attached to the Army of the Potomac held in reserve.
Credits. This page was last revised on May 26, 2020. It was originally submitted on March 29, 2009, by Craig Swain of Leesburg, Virginia. This page has been viewed 1,094 times since then and 14 times this year. Photos:   1, 2, 3, 4, 5. submitted on March 29, 2009, by Craig Swain of Leesburg, Virginia.
Share This Page.