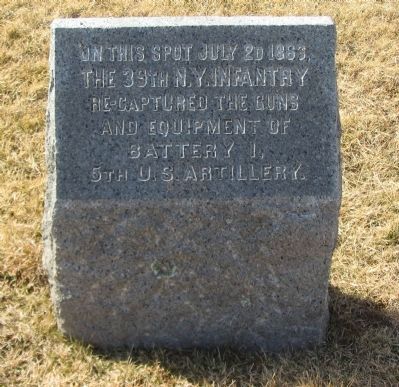 Photographed By Craig Swain, February 21, 2009
1. 39th New York Infantry Marker
Inscription.
39th New York Infantry. . On this spot July 2d 1863, the 39th N.Y. Infantry re-captured the guns and equipment of Battery I, 5th U.S. Artillery. . This historical marker was erected in 1888. It is in Cumberland Township in Adams County Pennsylvania

Location. 39° 48.171′ N, 77° 14.271′ W. Marker is in Cumberland Township, Pennsylvania, in Adams County. Memorial is on United States Avenue, on the left when traveling east. Located north of the George Weikert Farm between Plum Run and Cemetery Ridge in Gettysburg National Military Park. Touch for map. Marker is in this post office area: Gettysburg PA 17325, United States of America. Touch for directions. 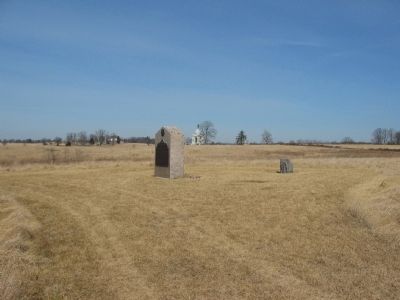 Photographed By Craig Swain
2. Battery I Tablet and 39th New York Marker
The tablet and marker stand on a rise overlooking Plum Run. Blocks and posts indicate in the past two artillery pieces represented the battery at this location. The actual position of the battery may have been further to the south, on the other side of United States Avenue.

Related markers. Click here for a list of markers that are related to this marker. 39th New York at Gettysburg. 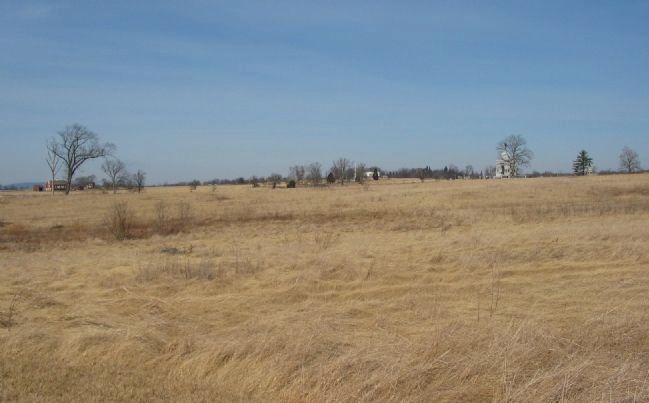 Photographed By Craig Swain, February 21, 2009
3. 39th New York Infantry Retakes The Guns
Looking from the marker location to the north toward the Pennsylvania Memorial. The 39th New York formed the second rank of Willard's Brigade, preparing to counter the main portion of Barksdale's Confederate Brigade then advancing on Plum Run. The 39th New York was detailed to clear the 21st Mississippi from Watson's guns. The New Yorkers crossed the ground between this point and the Pennsylvania Memorial to drive off the Mississippians.
Credits. This page was last revised on December 2, 2020. It was originally submitted on March 29, 2009, by Craig Swain of Leesburg, Virginia. This page has been viewed 1,056 times since then and 18 times this year. Photos:   1, 2, 3. submitted on March 29, 2009, by Craig Swain of Leesburg, Virginia.
Share this page.