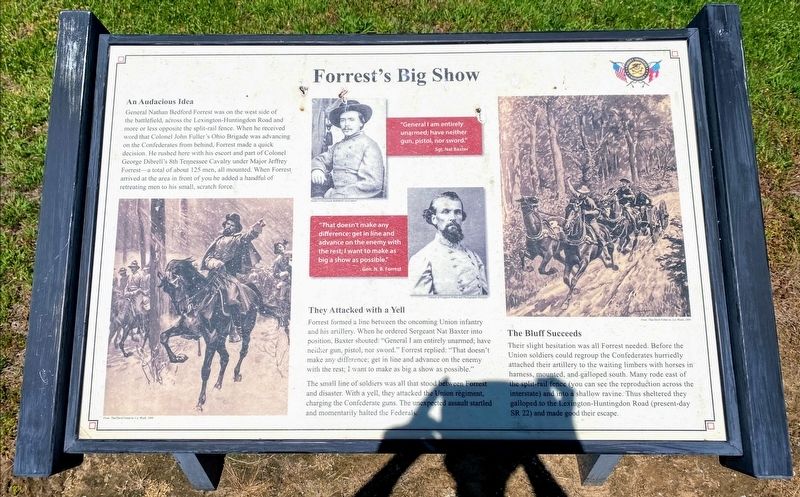 "General I am entirely unarmed; have neither gun, pistol, nor sword."
Sgt. Nat Baxter

"That doesn't make any difference; get in line and advance on the enemy with the rest; I want to make as big a show as possible."
Gen. N. B. Forrest

An Audacious Idea
General Nathan Bedford Forrest was on the west side of the battlefield, across the Lexington-Huntingdon Road and more or less opposite the split-rail fence. When he received word that Colonel John Fuller's Ohio Brigade was advancing on the Confederates from behind, Forrest made a quick decision. He rushed here with his escort and part of Colonel George Dibrell's 8th Tennessee Cavalry under Major Jeffery Forrest—a total of about 125 men, all mounted. When Forrest arrived at the area in front of you he added a handful of retreating men to his small, scratch force.

They Attacked with a Yell
Forrest formed a line between the oncoming Union infantry and his artillery. When he ordered Sergeant Nat Baxter into position, Baxter shouted: "General I am entirely unarmed; have neither gun, pistol, 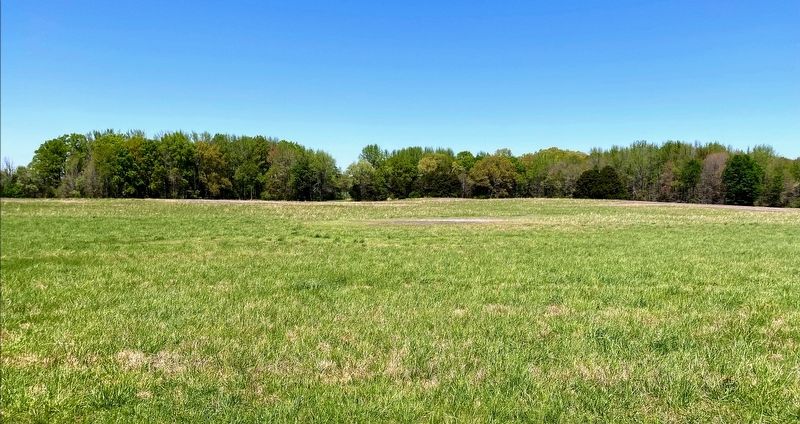 Photographed By Shane Oliver, April 11, 2021
2. View of the Parker's Crossroads Battlefield from the marker.

Click or scan to see
this page online
nor sword." Forrest replied: "That doesn't make any difference; get in line and advance on the enemy with the rest; I want to make as big a show as possible."

The small line of soldiers was all that stood between Forrest and disaster. With a yell, they attacked the Union regiment, charging the Confederate guns. The unexpected assault startled and momentarily halted the Federals.

The Bluff Succeeds
Their slight hesitation was all Forrest needed. Before the Union soldiers could regroup the Confederates hurriedly attached their artillery to the waiting limbers with horses in harness, mounted, and galloped south. Many rode east of the split-rail fence (you can see the reproduction across the interstate) and into a shallow ravine. Thus sheltered they galloped to the Lexington-Huntingdon Road (present-day SR 22) and made good their escape.

Location. 35° 47.631′ N, 88° 23.19′ W. Marker is in Parkers Crossroads, Tennessee, in Henderson County. Marker can be reached from Wildersville Road, 0.2 miles Tennessee Route 22, on the left when traveling east. Marker is located along the North Battlefield Trail, at Auto Tour Stop No. 1 of the Parker's Crossroads Battlefield Auto Tour. Touch for map. Marker is in this post office area: Wildersville TN 38388, United States of America. Touch for directions.

More about this marker. This marker replaces another marker at this location titled "Manning the Guns."