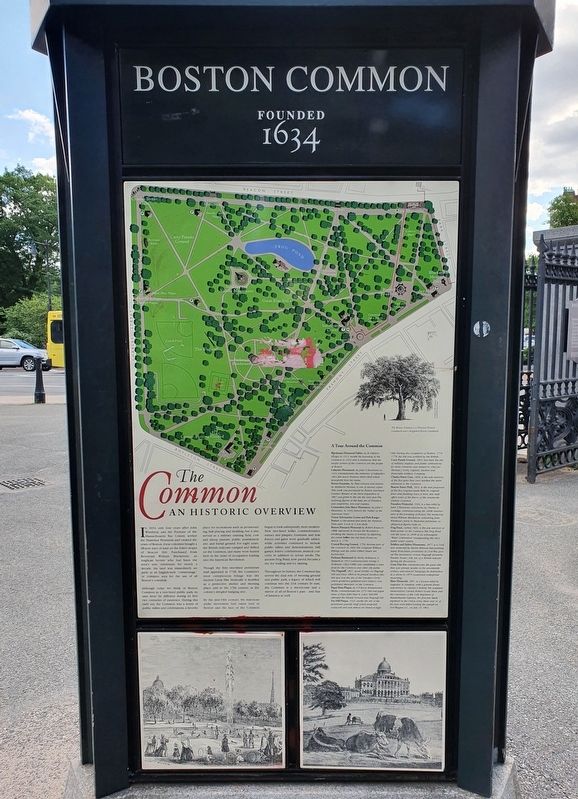 The Common
an Historic Overview

In 1634, only four years after John Winthrop and the Puritans of the Massachusetts Bay Colony settled the Shawmut Peninsula and created the town of Boston, these colonists bought a 48-acre tract of land on the lower slopes of Beacon Hill. Purchased from Reverend William Blackstone, an Anglican hermit who had been the area’s sole inhabitant for nearly a decade, the land was immediately set aside as an English-style “commonage,” or common area for the use of all Boston’s townfolk.

Although today we think of Boston Common as a tree-lined public park, its uses were far different during its first two centuries of existence . During this early era, the Common was a scene of public rallies and celebrations, a favorite place for recreations such as promenading, ball playing and sledding, but it also served as a military training field, cow and sheep pasture, public punishment site, and burial ground. For eight years, the British redcoats camped and drilled on the Common and many were buried here in the years of occupation leading into the American Revolution.

Though the first tree-lined 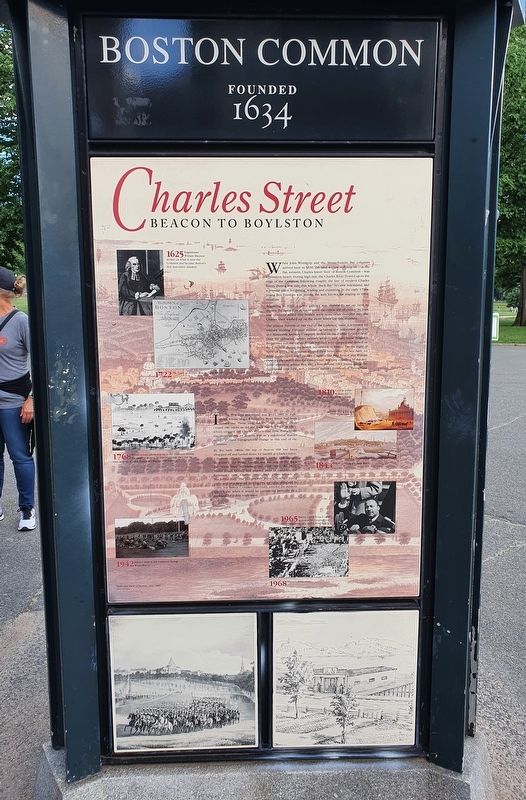 Click or scan to see
this page online
pedestrian mall appeared in 1728, the Common’s most conspicuous foliage was the ancient Great Elm. Ironically it doubled as a protective shelter and meeting place, and in the 17th century as the colony’s dreaded hanging tree.

By the mid-19th century, the American parks movement had taken root in Boston and the face of the Common began to look substantially more modern. New tree-lined walks, commemorative statues and plaques, fountains, and iron fences and gates were gradually added, while activities continued to include public rallies and demonstrations, ball games, festive celebrations, musical concerts, in addition to sylvan strolls. The ancient Frog Pond, now paved, became a site for wading and ice skating.

Throughout its history, the Common has served the dual role of meeting ground and public park, a legacy of which will continue into the 21st century. In sum, the Common is a microcosm and a mirror of all of Boston’s past – and that of America as well.

A Tour Around the Common
Blackstone Memorial Tablet, by R. Clipston Sturgis in 1913, recalls the founding of the Common in 1634 and its testimony that the lawful owners of the Common are the people of Boston.

Lafayette Monument, by John F. Paramino in 1924, commemorates the centenary of Lafayette's 1824 fête down Tremont Street Mall which henceforth bore his name. 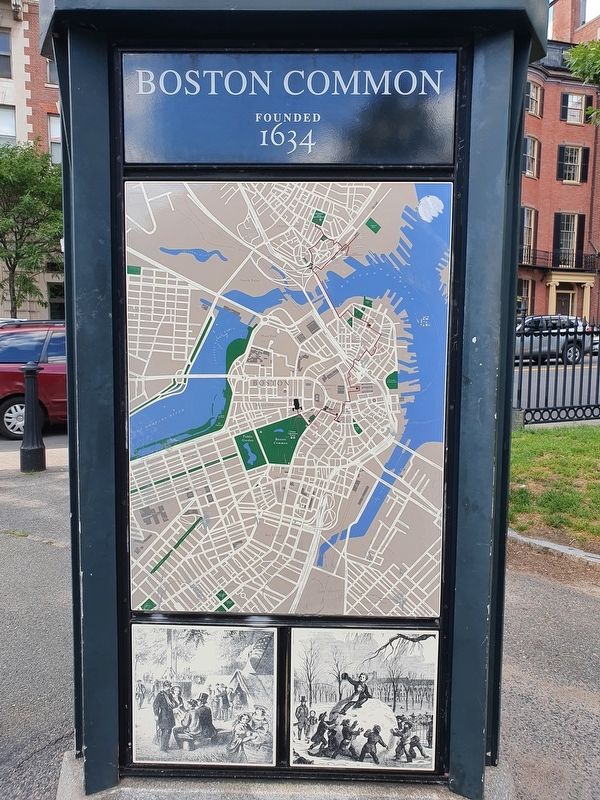 Photographed By J. Makali Bruton, June 16, 2021
3. The Common / Charles Street Marker
This third side of the marker is a map of Boston and sites along the Freedom Trail.
Fountain, by Paul Lienard and statues by Mathurin Moreau, is one of several copies. This work was purchased by Boston merchant Gardner Brewer at the Paris Exposition of 1867 and given to the city the next year. The reclining figures at the base are Poseidon and Amphitrite, Acis and Galatea.

Commodore John Barry Monument, by John F. Paramino, in 1949, honors the Father of the American Navy.

Boston Massacre Memorial by Robert Kraus in 1888, represents in bronze the Revolution breaking the chains of tyranny by depicting the events before the Old State House on March 5, 1770.

Central Burying Ground, 1756, became part of the Common in 1839. The composer William Billings and artist Gilbert Stuart are buried here.

Parkman Bandstand by Derby, Robinson & Shepard in 1912 commemorates George F. Parkman (1823 - 1908) who established a trust fund for the Common and other city parks.

The Flagstaff, 1837, stood initially on Flagstaff Hill and since 1866 at its present location. Also this spot was the site of the “Smokers Circle”, where gentlemen gathered since tobacco was prohibited elsewhere on the Common. 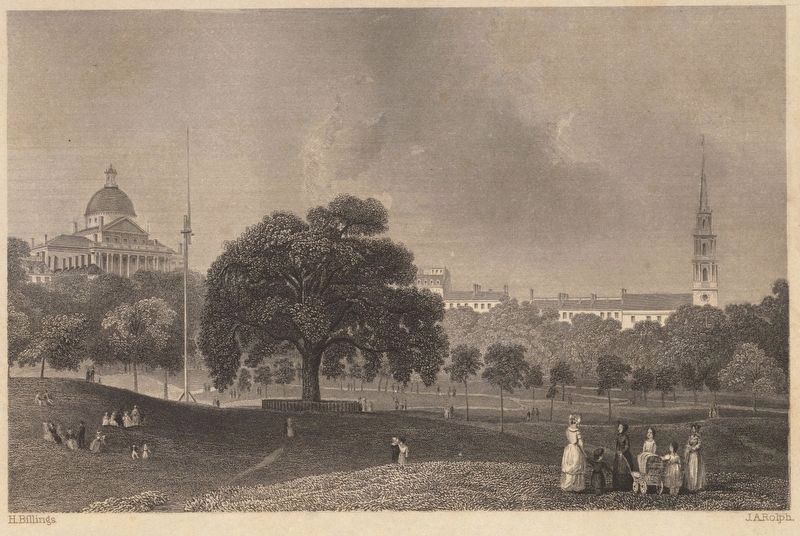 H. Billings (artist) and J.A. Rolph (engraver) (courtesy of Boston Public Library under cc BY-NC-ND), 1850
4. Boston Common
The tree with the fence surrounding it is the Great Elm, as mentioned on the marker. The tree survived until 1876.
the 1979 visit and papal mass of Pope John Paul II, when 400,000 attended the Parade Ground and Flagstaff Hill.

Fox Hill Plaque, 1925, marks the site of the prominent gravelly bluff projected westward and was almost an island at high tide. During the occupation of Boston, 1775 – 1776, the hill was fortified by the British.

Carty Parade Ground, 1852, has been the site of military displays and public celebrations for three centuries and named in 1963 for Thomas J. Carty, Captain, Ancient and Honorable Artillery Company.

Charles Street Gate, 1836, is the sole survivor of the five gates that once marked the main entrances to the Common.

Beacon Street Mall, 1815, is the best preserved of the original five malls. With its original fence and flanking rows of trees, this mall offers some of the flavor of the nineteenth century Common.

Founders Memorial, 1930, is a bas relief by John F. Paramino and frame by Charles A. Coolidge, commemorating the 300th anniversary of the founding of Boston. The memorial shows William Blackstone welcoming John Winthrop's party to Shawmut Peninsula, as allegorical figures look on.

Frog Pond, curbed 1826, is the sole survivor of the theee ponds on the Common. The Frog Pond was the scene in 1848 of an extravagant "Water Celebration" inaugurating the city's public water system. 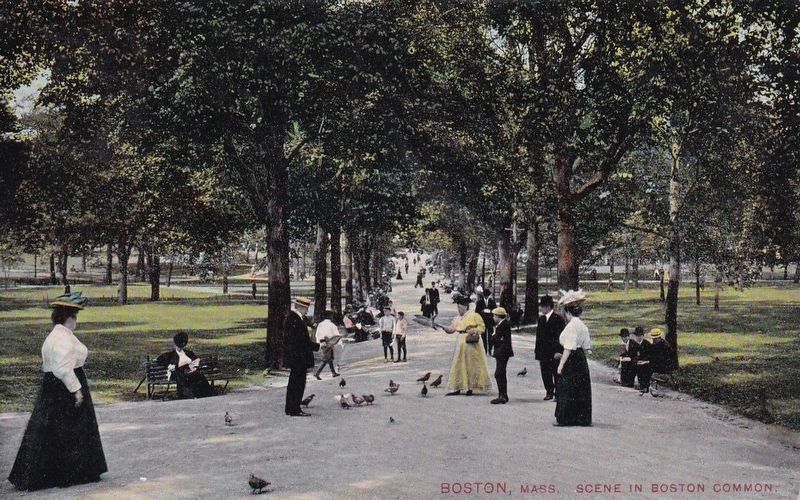 Photographed By Mason Bros. & Co., Boston, circa 1907
5. Boston, Mass. Scene in Boston Common.
and Sailors Monument, 1877, is a Civil war memorial by Martin Filmore that portraits many Bostonians prominent in Civil War period. The monument crowns Flagstaff (formerly Powder House) Hill, site of a British redoubt during the Revolution.

Great Elm Site commemorates the giant elm tha was already sizable in the seventeenth century and used for hangings. Its destructrion in a astorm in 1876 occasioned widespread mourning.

Shaw Memorial, 1897, is a bronze relief by August St. Gaudens, with a granite frame and terrace by Charles F. McKim. The sculpture immortalizes Colonel Robert Gould Shaw and the volunteers of the 54th Regiment of Massachusetts Infantry, the first free black regiment in the Union Army. Shaw and 32 of his men were killed leading the assault on Fort Wagner, S.C., on July 19, 1863.

When John Winthrop and the Massachusetts Bay colonists arrived here in 1630, the land we are standing on at the flat, western, Charles Street "foot" of Boston Common - was a primitive beach. During high tide, the Charles River flowed up to the edge of the Common, following roughly the line of modern Charles Street. During low tide, this whole "Back Bay" became marshland, and a popular place for fishing, wading and clamming. In the early 1700s, young Ben Franklin was among the kids known for angling in these mudflats.

Beginning in 1769, a town gallows was reportedly set up here to replace the Great Elm as the in-town execution site of choice. At least one observer noted that bodies were sometimes dumped into the Charles, then washed up on the shore when the tide returned.

The relative flatness of this end of the Common made it a natural for military training. Colonial militias, including the still-extant Andent and Honorable Artillery Company, drilled on the Parade Ground here Over the centuries, various infantry, artillery and light horse brigades frequented this site - even British regulars, who camped and drilled on the Common during the British'occupation of Boston. On the night of April 18, 1775, 700 redcoats slipped their boats into the sea here, en route to Lexington and Concord. Couriers like Paul Revere and William Drwes rode swiftly into the countryside warning colonists of the red- coats’ imminent arrival, Fox Hill, a low mound once found along the flat coastal edge here, was a popular military fortification throughout this time.

1794, this tidal marshland was given over to rope walks, whose original home on Pearl Street had been burned out. These long, narrow, rope making sheds caused vile odors, as did the Back Bay Mill Dam of 1821 which clogged the Charles River's tidal flow. Fortunately, the development of Beacon Hill as a residential district caused a major topographical change at this end of the Common.

By the early 1800s, the top of Beacon Hill had been chopped off and hauled down for landfill at Charles Street, a roadway officially recorded by 1803. As the 19th century progressed, the Public Garden and the rest of the Back Bay were filled in, planted and built upon. By 1824, Mayor Josiah Quincy liad planted trees to complete the Common's new Charles Street Mall, today known as MacArthur Mall. The playgrounds, statues, benches, paved paths and underground parking you see today were still to come, but Boston Common had finally entered the modern era – a day when it would be considered primarily as a parkland for public enjoyment.

1625
Englishman William Blaxton settled on what is now the Common and became Boston’s first non-native resident.

1768
British troops pitched tents in the Common during the siege of Boston. In this engraving, they can be seen in front of John Hancock’s Beacon Hill mansion.

1810
Cutting down Beacon Hill to use as landfill for Mill Pond.

1844
Trains crossing the Back Bay.

1942
Military Drill in the Common during World War II.

1965
Martin Luther King Jr. spoke against school segregation upon completion of a march from Roxbury.

Topics and series. This historical marker is listed in these topic lists: Parks & Recreational Areas • Settlements & Settlers. In addition, it is included in the Lafayette’s Farewell Tour series list. A significant historical date for this entry is March 5, 1770.

Location. 42° 21.367′ N, 71° 4.143′ W. Marker is in Boston, Massachusetts, in Suffolk County. Marker is at the intersection of Beacon Street and Charles Street, on the left when traveling west on Beacon Street. Touch for map. Marker is in this post office area: Boston MA 02108, United States of America. Touch for directions.