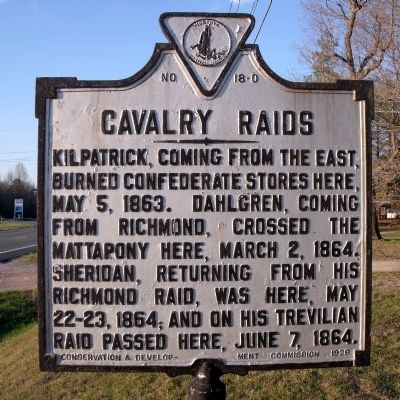 Photographed By Bernard Fisher, April 9, 2009
1. Cavalry Raids Marker
Inscription.
Cavalry Raids. . Kilpatrick, coming from the east, burned Confederate stores here, May 5, 1863. Dahlgren, coming from Richmond, crossed the Mattapony here March 2, 1864. Sheridan, returning from his Richmond raid, was here, May 22-23, 1864, and on his Trevilian raid passed here, June 7, 1864. . This historical marker was erected in 1928 by Conservation and Development Commission. It is in Aylett in King William County Virginia

Topics and series. This historical marker is listed in this topic list: War, US Civil. In addition, it is included in the Virginia Department of Historic Resources series list. A significant historical month for this entry is March 1916.

Other nearby markers. At least 8 other markers are within 7 miles of this marker, measured as the crow flies. Montville (approx. 0.8 miles away); Rumford Academy (approx. 3 miles away); Sharon Indian School (approx. 3.4 miles away); 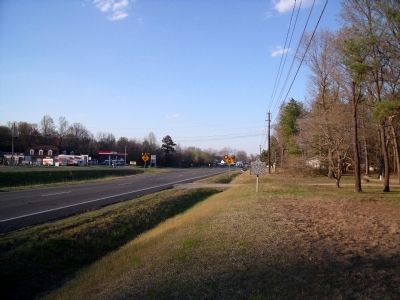