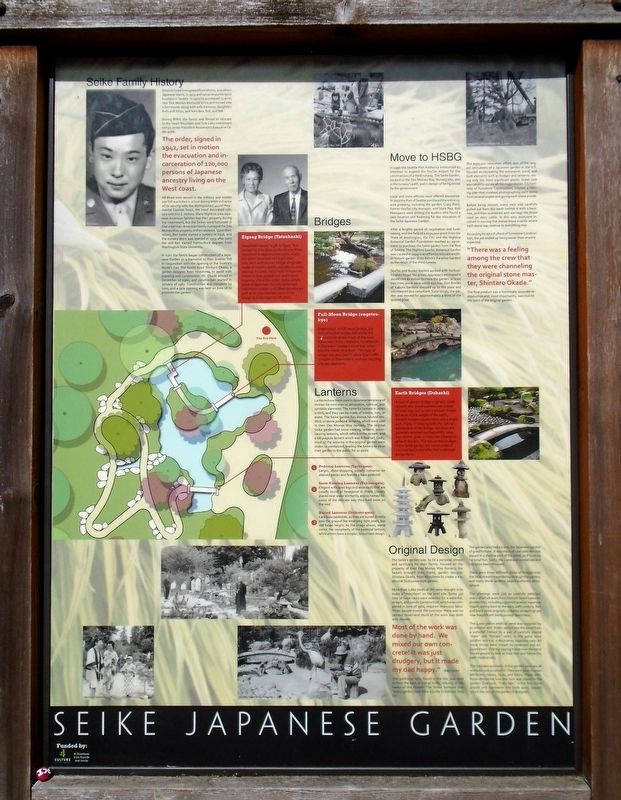 Seike Family History
Shinichi Seike immigrated from Ehime, a southern Japanese island, in 1919 and ran an import/export business in Seattle. In 1929 he purchased 13 acres near Des Moines Memorial Drive and moved into a farmhouse along with wife Kameno, daughters Ruth and Shizu, and sons Ben, Toll, and Hal.

During WWII, the family was forced to relocate to the Heart Mountain and Tule Lake internment camps under President Roosevelt's Executive Order 9066.

The order, signed in 1942, set in motion the evacuation and incarceration of 120,000 persons of Japanese ancestry living on the West coast.

All three sons served in the military and middle son Toll was killed in action during WWII in France while serving with the distinguished 442nd Regimental Combat Team, the most decorated military unit in U.S. History. Many Highline-area Japanese American families lost their property during the internment, but the Seikes were fortunate in that a German-American family managed the Des Moines Way property in their absence. Upon their return, Ben Seike started a nursery in 1948, and the nursery store was 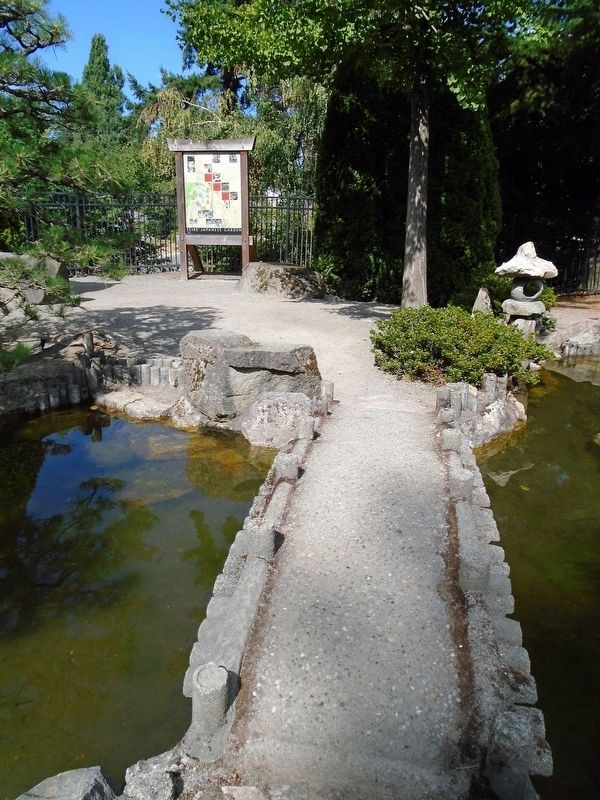 Click or scan to see
this page online
opened in 1953 after sons Hal and Ben earned Horticulture degrees from Washington State University.

In 1961 the family began construction of a Japanese Garden as a memorial to their brother Toll in conjunction with the opening of the Seattle's [sic] World's Fair. The family hired Shintaro Okada, a garden designer from Hiroshima, to assist with planning and construction. Mr. Okada arrived in December of 1960, and construction started in January of 1961. Construction was complete by June, and a gala opening was held on June 28 to promote the garden.

Original Design
The Seike's [sic] garden was to be a personal retreat and sanctuary for their family. Housed on the property of their Des Moines Way Nursery, the Seike's [sic] brought their friend, garden designer Shintaro Okada, from Hiroshima to create a traditional Tsukiyama style garden.

More than 1,000 yards of dirt were brought in to make a "mountain" on the level site. Some 350 tons of huge rocks were selected for a waterfall, stream, and ponds. Construction, which was completed in June of 1961, required strenuous labor. Three people mixed the concrete—there was no cement mixer—and much of the work was done with shovels.

Most of the work was done by hand. We mixed our own concrete! It was just drudgery, but it made my dad happy."
-Ben Seike 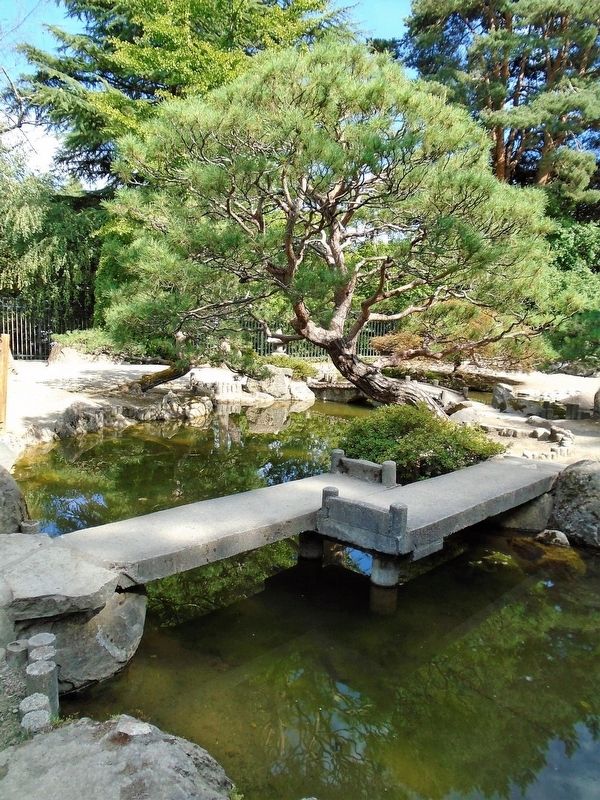 Photographed By William Fischer, Jr., July 28, 2021
3. Seike Japanese Garden
found at the site, was used to form the back of a large turtle, relaxing on the banks of the stream. The Seikes believed that "every garden must have a turtle to indicate long life."

The garden also had a crane, the Japanese symbol of good fortune. It was made of cast concrete and placed in a shallow part of the pond, as if hunting for small fish. Sadly, the crane was vandalized and has since been removed.

There were three different styles of bridges over the little stream meandering through the garden, and many stone lanterns added authentic atmosphere.

The plantings were just as carefully selected, many of which were from Shinichi Seike's personal collection, including a gnarled laceleaf Japanese maple, dating back to the early 20th century. Red and black pines originally installed as saplings are now magnificent hand-pruned specimens.

The 2,000-gallon artificial pond was supplied by an artesian well. Water spilled into the pond from a waterfall framed by a pair of carefully placed "male" and "female" rocks. In the pond were goldfish and Koi, a decorative Japanese carp. All these things were meant [to] be observed and enjoyed slowly. One zig-zaging bridge over the pond forced people to look at their feet and follow the path meditatively.

The boulders and rocks in the garden were are [sic] all symbolic and purposeful. They were given 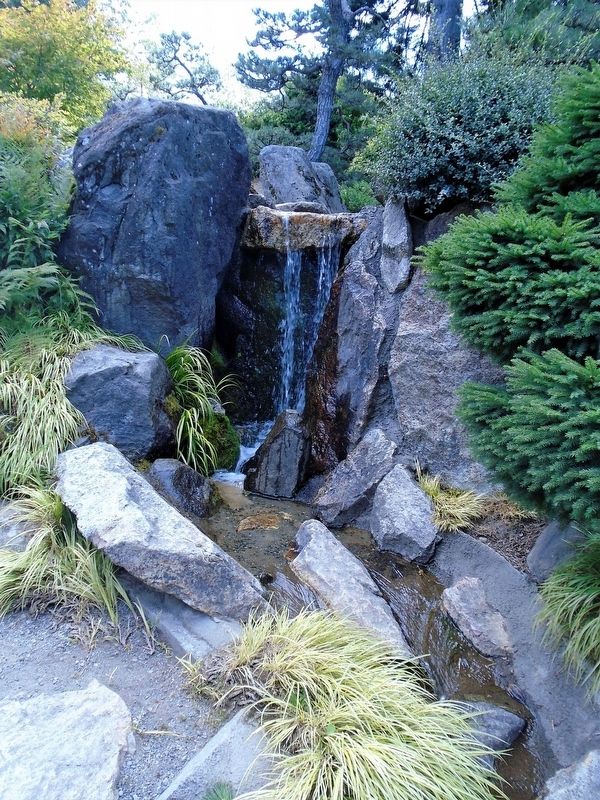 Photographed By William Fischer, Jr., July 28, 2021
4. Seike Japanese Garden
human attributes: names, faces, and backs. Those attributes determine how the rock was placed in the garden. One rock, "Fudo Seki," is the first stone placed and represents the male spirit, around which the rest of the garden is designed.

Move to HSBG
In 1996 the Seattle Port Authority announced its intention to expand the SeaTac Airport for the construction of a third runway. The Seike Garden, located at the Des Moines Way Nursery site, was in the runway's path, and in danger of being seized by the government.

Local and state officials soon offered assistance. In 2002 the Port of Seattle purchased the entire 13-acre property, including the garden. Craig Ward, former SeaTac city manager, and State Rep. Bob Hasegawa were among the leaders who found a new location and financing for the relocation of the Seike Japanese Garden.

After a lengthy period of negotiation and fundraising, and the help of a $250,000 grant from the State of Washington, the City and the Highline Botanical Garden Foundation reached an agreement to purchase the Seike garden from the Port of Seattle. The Highline SeaTac Botanical Garden was created in 1999 in an effort to relocate another historic garden (Elda Behm's Paradise Garden) as the result of the third runway.

SeaTac and Burien leaders worked with horticulturalists to get fair prices. Appraisers estimated 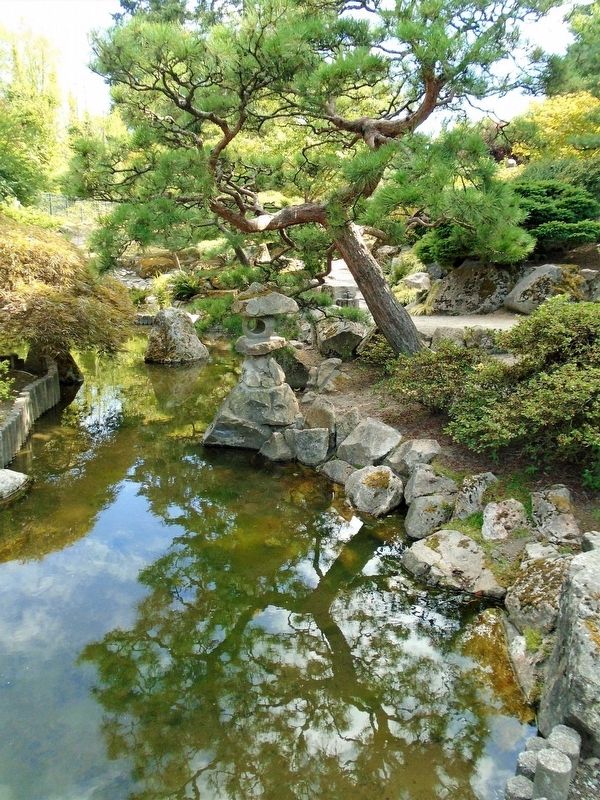 Photographed By William Fischer, Jr., July 28, 2021
5. Seike Japanese Garden
it would cost $1 million to move the garden: at least two trees alone were worth $50,000. Don Brooks of Kabota Gardens stepped up to the plate and volunteered as a consultant. Surprisingly, the garden was moved for approximately a third of the quoted price.

The $350,000 relocation effort, one of the largest relocations of a Japanese garden in the U.S., focused on recreating the stonework, pond, and built elements such as bridges and lanterns, saving only the most significant plants. Great care was taken to survey all the major stones. CG Hartness of Turnstone Construction, created a moving plan that involved photographing each stone from several angles and giving each stone a code.

Before being moved, every rock was carefully pulled out from the earth behind it with a backhoe, and then numbered with ear-tags like those used on dairy cattle. In this way, everyone involved in moving the stones knew exactly where each stone was relative to everything else.

According to John Fulford of Turnstone Construction, the job ended up being easier than anyone expected.

"There was a feeling among the crew that they were channeling the original stone master, Shintaro Okada."

The final product was a historically accurate reproduction and, most importantly, was true to the spirit of the original garden. 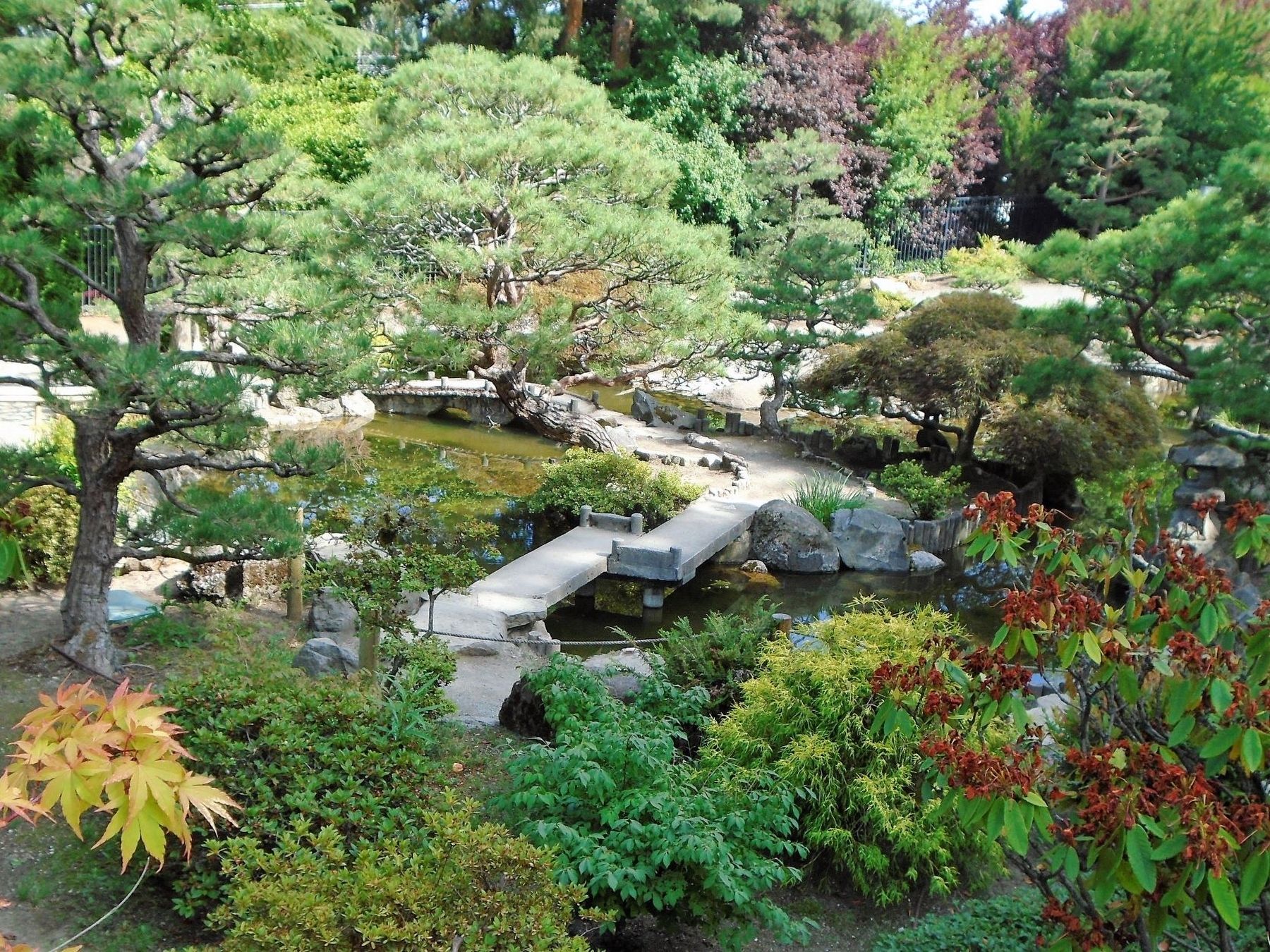 Photographed By William Fischer, Jr., July 28, 2021
6. Seike Japanese Garden
means "eight bridges." It is named for a location on the Azuma River, renowned in Japanese literature, where the water branched into eight channels, each with its own bridge. Originally made of wooden planks and piles to cross swampy iris beds, Yatsuhashi bridges are meant to slow pedestrians and inspire lingering above the water. Some simple stone bridges take the principals from Yatsuhashi bridges and offset the straight path at an intermediate point in the bridge to encourage mindfulness.

Full-Moon Bridge (engetsukyo)
Engetsukyō, or full-moon bridge, is a form of arched bridge defined by the semi-circular shape made at the base. When seen from a distance, its reflection in the water creates a circle that resembles the moon, or a drum. This type of bridge was also used to allow boat traffic or water to flow under it without requiring a longer approach.

Earth Bridges (Dobashi)
A type of garden bridge originally made of earth and gravel packed over a base of small logs laid across a wooden frame. Because of the weight of the earth, dobashi bridges usually have only a slight arch, if any. In keeping with the natural appearance of the bridge, handrails are generally avoided and frequently bamboo shoots, grass or moss are allowed to grow in the dirt. The two arched bridges in the Seike garden are constructed of concrete but styled after 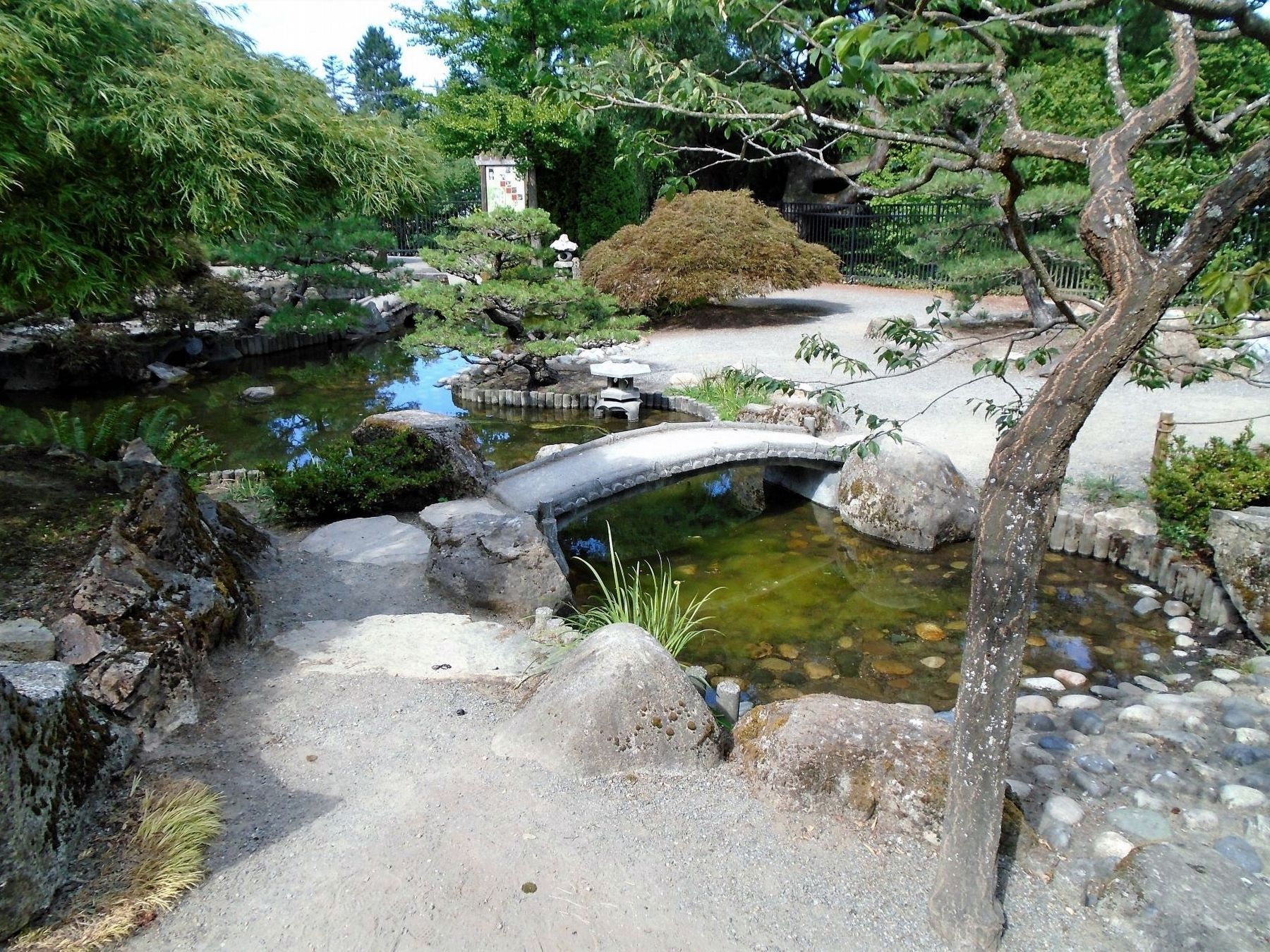 Lanterns
Lanterns have been used in Japanese temples and shrines for centuries as decorative, spiritual, and symbolic elements. The name for lantern in Japan is tōrō, and they can be made of bronze, iron, or stone. The Seike garden has always housed ishidōrō, or stone pedestal lanterns, which were sold in their Des Moines Way Nursery. The original Seike garden had snow-viewing lanterns, water-viewing lanterns, which reflect in the stream, and a tall pagoda lantern which was 8 feet tall. Sadly, most of the lanterns in the original garden were stolen or vandalized, leading the Seike's [sic] to close their garden to the public for 10 years.

2 - Snow-Viewing Lanterns (Yukimi-gata):
Elegant with open legs and wide roofs that are usually round or hexagonal in shape. Usually placed near water elements, and so named because of the delicate way they hold snow on the roof.

3 - Buried Lanterns (Ikekomi-gata):
Lack base pedestals, so they are buried directly into the ground like emerging light posts, but still boast height. As the image shows, some mimic the complexity of the pedestal lantern, while others have a simpler, less ornate design. 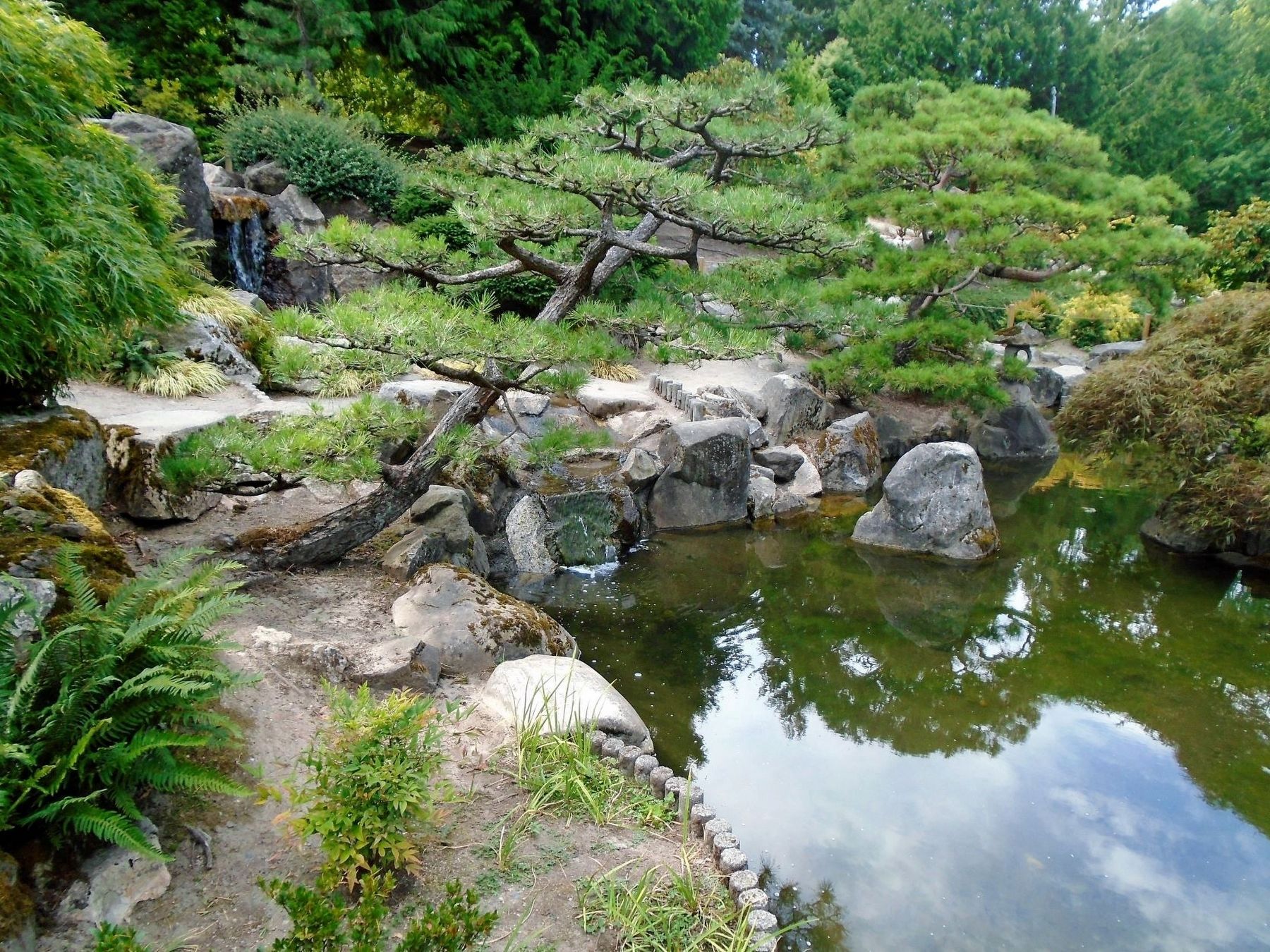 Topics. This historical marker is listed in these topic lists: Asian Americans • Horticulture & Forestry • Parks & Recreational Areas. A significant historical year for this entry is 1919.

Location. 47° 28.757′ N, 122° 18.153′ W. Marker is in SeaTac, Washington, in King County. Marker is in the Highline SeaTac Botanical Garden, adjacent to the SeaTac Community Center in North SeaTac Park. Touch for map. Touch for map. Marker is at or near this postal address: 13735 24th Avenue South, Seattle WA 98168, United States of America. Touch for directions.