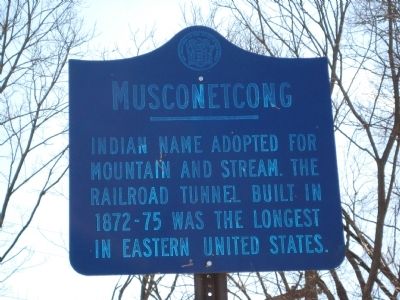 Photographed By Alan Edelson, April 12, 2009
1. Musconetcong Marker
Inscription.
Musconetcong. . Indian name adopted for mountain and stream. The railroad tunnel built in 1872–1875 was the longest in Eastern United States. . This historical marker was erected by State of New Jersey. It is in West Portal in Hunterdon County New Jersey

Indian name adopted for mountain and stream. The railroad tunnel built in 1872–1875 was the longest in Eastern United States.

Topics. This historical marker is listed in these topic lists: Native Americans • Railroads & Streetcars. A significant historical year for this entry is 1875.

Location. Marker has been reported missing. It was located near 40° 39.282′ N, 75° 1.278′ W. Marker was in West Portal, New Jersey, in Hunterdon County. Marker was on New Jersey Route 173, on the right when traveling east. Touch for map. Marker was in this post office area: Asbury NJ 08802, United States of America. Touch for directions. 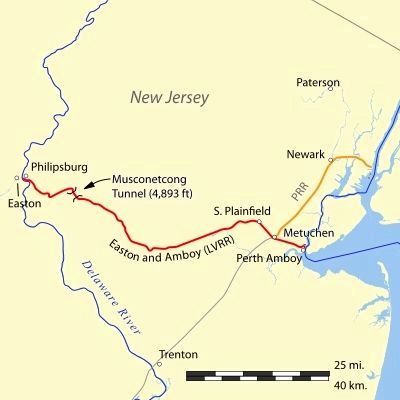 Click or scan to see
this page online
miles away); Bellewood Park (approx. 1.2 miles away); Tower Hill Farm (approx. 1.3 miles away). Touch for a list and map of all markers in West Portal.

More about this marker. Marker has been replaced with Jugtown Mountain Marker.