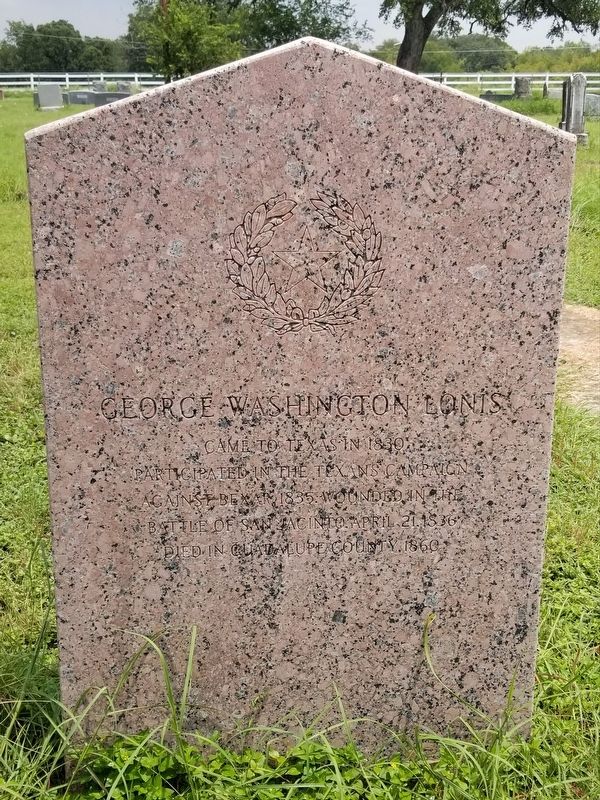 By James Hulse, August 4, 2021
1. George Washington Lonis Marker
Inscription.
George Washington Lonis. . ,
Came to Texas in 1830 Participated in the Texans Campaign Against Bexar 1835. Wounded in the Battle of San Jacinto, April 21, 1836 Died in Guadalupe County, 1860. . This historical marker was erected in 1962 by State of Texas. It is in Seguin in Guadalupe County Texas

Topics. This historical marker is listed in these topic lists: Cemeteries & Burial Sites • War, Texas Independence. A significant historical date for this entry is April 21, 1836.

Location. 29° 34.414′ N, 97° 56.112′ W. Marker is in Seguin, Texas, in Guadalupe County. Marker can be reached from East Walnut Street (County Highway 202) ¼ mile east of North Highway 123 Byway. The marker is located in the southeast section of the San Geronimo Cemetery. Touch for map. Marker is at or near this postal address: 1620 East Walnut Street, Seguin TX 78155, United States of America. Touch for directions.

By James Hulse, August 4, 2021
2. The George Washington Lonis Marker is the marker on the right of the two pink markers

In the Battle of San Jacinto, Washington was shot down. My father saw him fall. George Wright, Claiborn Rector and James Hays, members of the same company, were near him at the time, and these four picking up a blanket from the abandoned baggage of the routed foe, went to get Washington and carry him to the rear. He had fallen and was lying on his face, and had not recovered consciousness. They spread the blanket by him and turned him over towards it. As they did this, he came to himself and recognized them; his first words were: "Boys, I fired my gun thirteen times, and I saw twelve of the yellow bellies fall." He was shot through the right lung straight through, from front to back- and at every respiration of the bloody breath escaped from the wound. For many years after this I know him well and have heard my father relate, as I have here written, the fact and circumstances of Washington Lonis being shot through and through on the field of San Jacinto. Source: San Jacinto Museum