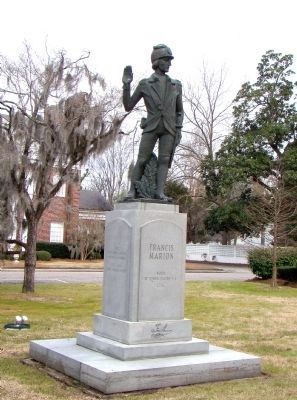 Topics. This historical marker is listed in these topic lists: War, French and Indian • War, US Revolutionary. A significant historical month for this entry is February 1780. 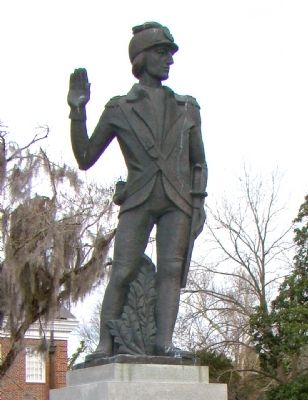 Click or scan to see
this page online
west. In the park across from the courthouse. Touch for map. Marker is in this post office area: Marion SC 29571, United States of America. Touch for directions.

Also see . . .
1. Brigadier General Francis Marion, “The Swamp Fox”. “When British forces captured Charleston in 1780, American troops pulled out of South Carolina. Marion, however, stayed and organized a small force of poorly equipped men, training them in guerrilla tactics. Living off the land, Marion and his men harassed British troops by staging small surprise attacks in which they captured small groups of British soldiers, sabotaged communication and supply lines, and rescued American prisoners. After these attacks Marion withdrew his men to swamp country unfamiliar to the British. Colonel Banastre Tarleton, a British commander, gave Marion his nickname 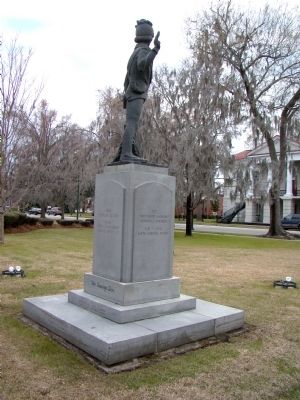 Photographed By J. J. Prats, February 26, 2009
3. Francis Marion Monument
General Marion faces the Marion County courthouse.
when he complained that it was impossible to catch the ‘swamp fox.’ Near the end of the war, Marion and American General Nathanael Greene joined forces. In 1781 they successfully fought at the Battle of Eutaw Springs and forced the British retreat to North Carolina.” (Submitted on April 19, 2009.)

S*0814 Concurrent Resolution, By J.R. Gasque and L. Floyd
A CONCURRENT RESOLUTION TO EXTEND AN INVITATION TO THE MEMBERS OF THE GENERAL ASSEMBLY AND TO THE CITIZENS OF THE STATE TO ATTEND THE CEREMONIES DEDICATING THE STATUE OF GENERAL FRANCIS MARION ON THE COURTHOUSE SQUARE IN THE CITY OF MARION AT 10:30 A.M. ON FRIDAY, APRIL 9, 1976. 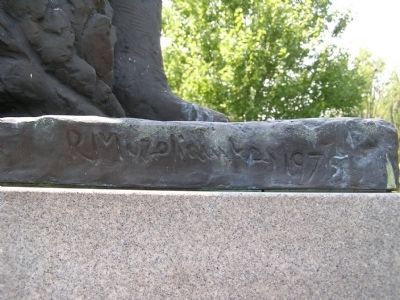 Photographed By Anna Inbody, August 7, 2011
4. Close up of the Sculptor's signature in 1975
2. Francis Marion statue dedication program 1975
The statue was commissioned by a county statue committee made up of historians, county politicians and concerned citizens. Members included Dr. Robert Bass, Mrs. C.D. Joyner, Jr., B. Pratt Gasque, Millard Osborne and M. Gault Beeson. The sculptor and designer was Ramojus Mozoliauskas and Brown Memorials constructed the statue. George C. Roberts, Jr., history professor at the University of South Carolina, wrote a proclamation for Francis Marion Day which was read as part of the ceremony.