Western Terminus of the Lincoln Highway 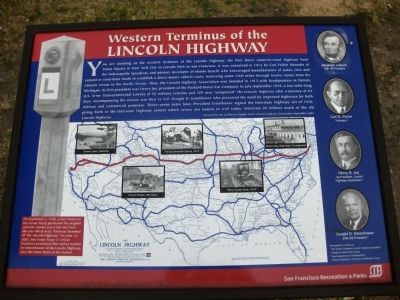 You are standing at the western terminus of the Lincoln Highway, the first direct coast-to-coast highway from Times Square in New York City to Lincoln Park in San Francisco. It was conceived in 1912 by Carl Fisher (founder of the Indianapolis Speedway and pioneer developer of Miami Beach) who encouraged manufacturers of autos, tires and cement to contribute funds to establish a direct motor-vehicle route, traversing 3,300 miles through 12 states, from the Atlantic Ocean to the Pacific Ocean. Thus, the Lincoln Highway Association was founded in 1913 with headquarters in Detroit, Michigan. Its first president was Henry Joy, president of the Packard Motor Company. In July, 1919, a two-mile-long U.S. Army Transcontinental Convoy of 56 vehicles and 209 men "conquered" the Lincoln Highway after a journey of 62 days. Accompanying the convoy was then Lt. Colonel Dwight David Eisenhower who perceived the need for improved highways for both military and commercial purposes. Thirty-seven years later, President Eisenhower signed the Interstate Highway Act of 1956, giving birth to the Interstate Highway system which serves our nation so well today. Interstate 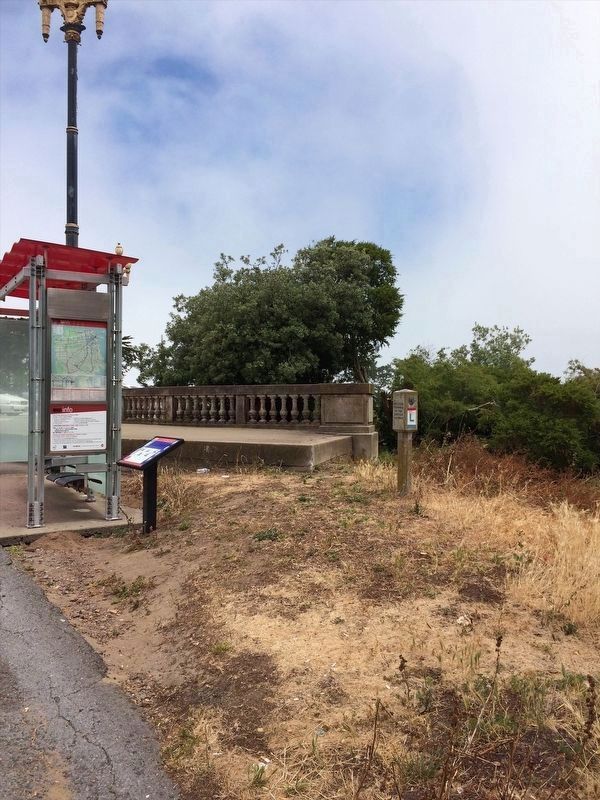 Photographed By Adam Margolis, May 31, 2016
2. Western Terminus of the Lincoln Highway Marker

Click or scan to see
this page online
80 follows much of the old Lincoln Highway.
Donated by the California Chapter of the Lincoln Highway September 2005

Erected 2005 by California Chapter of the Lincoln Highway Association.

Topics and series. This historical marker is listed in these topic lists: Notable Places • Roads & Vehicles. In addition, it is included in the Former U.S. Presidents: #34 Dwight D. Eisenhower, and the Lincoln Highway series lists. A significant historical month for this entry is July 1919.

Location. 37° 47.099′ N, 122° 29.965′ W. Marker is in San Francisco, California, in San Francisco City and County. Marker is on 34th Avenue near El Camino del Mar, on the left when traveling south. The Western Terminus marker and accompanying monument are located next to the bus stop in the parking lot of the Palace of Legion of Honor in Lincoln Park. Touch for map. Marker is in this post office area: San Francisco CA 94121, United States of America. Touch for directions. 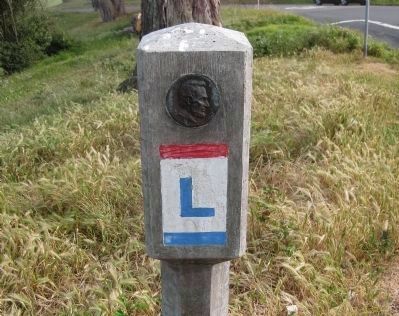 Photographed By Andrew Ruppenstein, April 18, 2009
3. Lincoln Highway Route-marking Monument
Closeup of monument, showing the Lincoln portrait medallion set in cement (reading "This Highway Dedicated to Abraham Lincoln"), and a blue "L" set on a field of red, white, and blue.
miles away); China Beach (approx. half a mile away); Electric Streetcar Line (approx. half a mile away); Navigating the Golden Gate - Bonfires, buoys, and foghorns (approx. 0.6 miles away). Touch for a list and map of all markers in San Francisco.

More about this marker. Directly below the provided text is pictured a map of the US, showing the route of the Lincoln Highway (in red) and feeder routes (in blue), as approved and adopted in September 1913 by the Lincoln Highway Association. Superimposed upon the map are a number of photographic vignettes:

1) A view of Donner Lake, California
2) A car driving through Church Buttes, Wyoming
3) A shot of the Transcontinental Convoy in 1919, depicting a truck be pulled out of a ditch
4) A car driving through mud up to its axles in Story County, Iowa
5) Cars parked next to the Grand View Ship Hotel in Pennsylvania

The left of the marker depicts a typical route-marking highway monument (depicting a right turn).

The lower left of the marker has a sidebar whose text is presented below with the last picture. 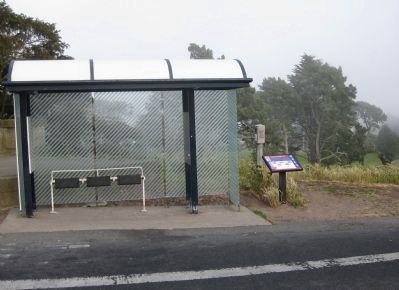 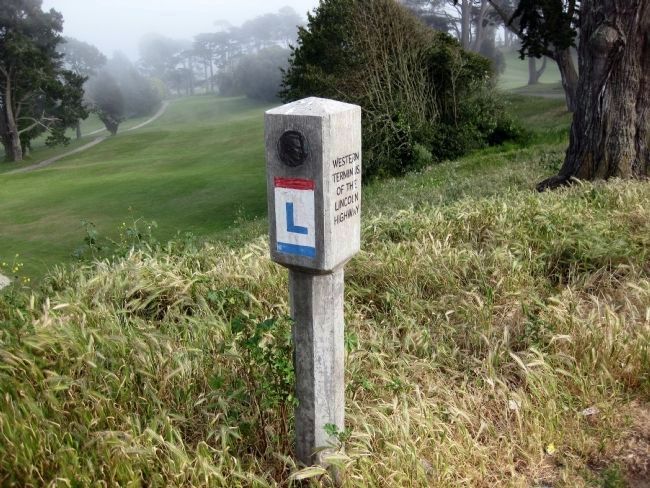