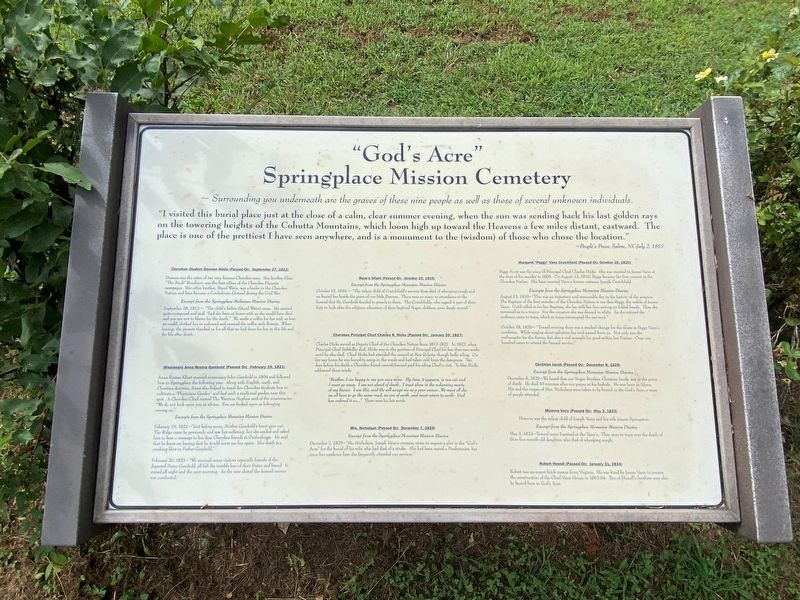 —Surrounding you underneath are the graves of these nine people as well as those of several unknown individuals.

"I visited this burial place just at the close of a calm, clear summer evening, when the sun was sending back his last golden rays on the towering heights of the Cohutta Mountains, which loom high up toward the Heavens a few miles distant, eastward. The place is one of the prettiest I have seen anywhere, and is a monument to the (wisdom) of those who chose the location."
-People's Press, Salem, NC-July 2, 1853

Cherokee Student Dawnee Watie (Passed On: September 27, 1812)
Dawnee was the sister of two very famous Cherokee men. her brother, Elias "The Buck" Boudinot, was the first editor of the Cherokee Phoenix newspaper. her older brother, Stand Watie, was a leader in the Cherokee Nation and later became a Confederate General during the Civil War.

Excerpt from the Springplace Moravian Mission Diaries
September 28, 1812 - "The child's father (David Watie) came. He seemed quite composed and said, "had she been at home with us she would have 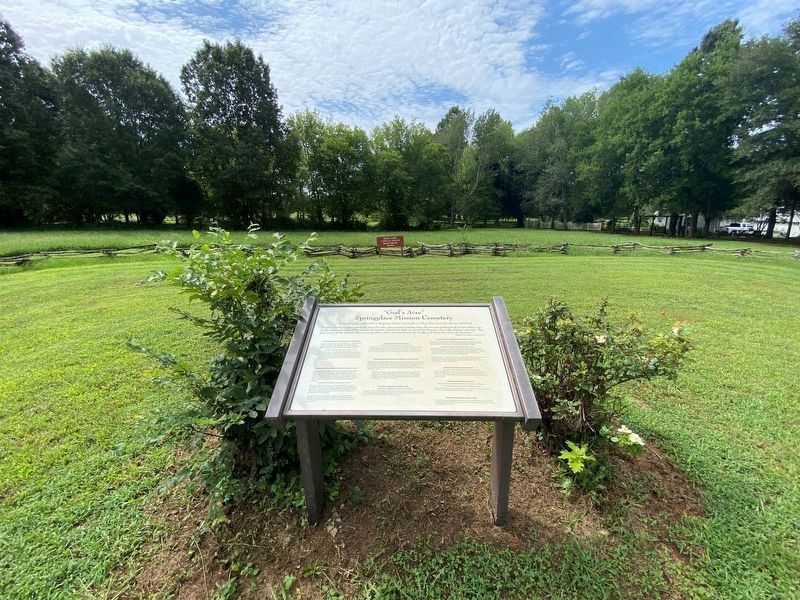 Click or scan to see
this page online
died and you are not to blame for the death." We made a coffin for her and, as best we could, clothed her in a shroud and covered the coffin with flowers. When leaving, the parents thanked us for all that we had done for her in this life and the life after death.

Missionary Anna Rosina Gambold (Passed On: February 19, 1821)
Anna Rosina Kliest married missionary John Gambold in 1804 and followed him to Springplace the following year. Along with English, math, and Christian doctrine, Anna also helped to teach her Cherokee students how to cultivate a "Physicians Garden" and had such a medicinal garden near this spot. A Cherokee Chief named The Warriors Nephew said of the missionaries, "We do not look upon you as whites...You are looked upon as belonging among us."

February 19, 1821-"Just before noon, Mother Gambold's heart gave out. The Ridge came by previously and saw her suffering, but she smiled and asked him to bear a message to her dear Cherokee friends at Oothealooga. He said that he knew on leaving that he would never see her again. Her death is a crushing blow to Father Gambold."

February 20, 1821-"we received many visitors especially friends of the departed Sister Gambold, all felt terrible loss of their Sister and friend. It rained all night and the 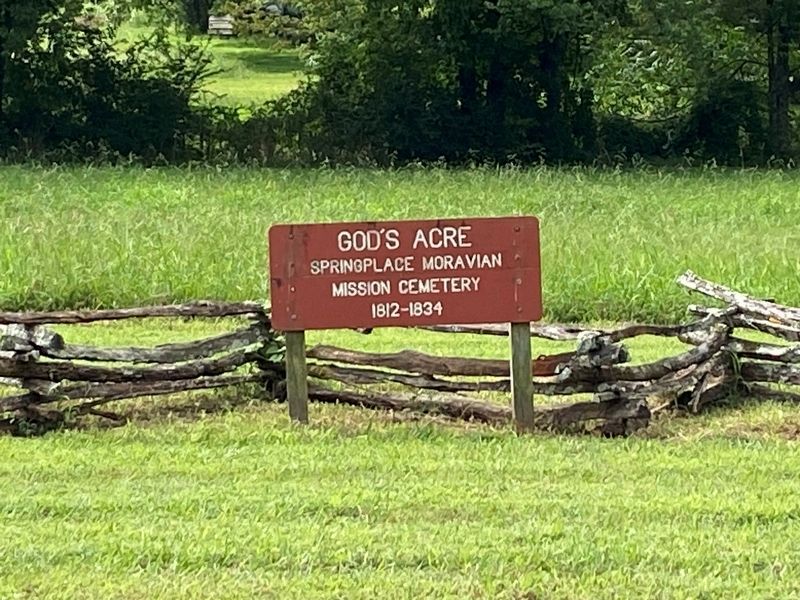 Photographed By Darren Jefferson Clay, August 28, 2021
3. The Historical Marker Database Marker
next morning. As the rain abated the funeral service was conducted."

Rose's Infant (Passed On: October 15, 1816)
Excerpt from the Springplace Moravian Mission Diaries
October 15, 1816 - "The infant child of Crutchfield's servant Rose died of whooping cough and we buried her beside the grave of our little Dawnee. There were so many in attendance at the funeral that Br. Gambold decided to preach to them. The Crutchfields, who regard it part of their duty to look after the religious education of their baptized Negro children, were deeply moved."

Cherokee Principal Chief Charles R. Hicks (Passed on January 20, 1827)
Charles Hicks served as Deputy Chief of the Cherokee Nation from 1817-1827. In 1827, when Principal Chief Pathkiller died, Kicks rose to the position of Principal Chief for less than two weeks until he also died. Chief Hicks had attended the council at new Echota, though badly ailing. On his way home he was forced to camp in the woods and had taken cold from the dampness. Two days before his death a Cherokee friend named Samuel paid his ailing Chief a visit. To him Hicks addressed these words:

"Brother, I am happy to see you once more. My time, it appears, is run out and I must go away. I am not afraid of death...I trust alone in the redeeming merits of my Savior. I am His, and He will accept me as a poor sinner. We must all die, we all have to go the same road, we are of earth, and must return to earth. God has ordered it so..." These were his last words.

Mrs. Nicholson (Passed On: December 7, 1829)
Excerpt from the Springplace Moravian Mission Diaries
December 7, 1829-"Mrs. Nicholson, Joseph Vann's overseer, came to request a plot in the "God's Acre" for the burial of his wife, who had died of a stroke. She had been reared a Presbyterian, but since her residence here she frequently attended our services."

Margaret "Peggy" Vann Crutchfield (Passed On: October 18, 1820)
Peggy Scott was the niece of Principal Chief Charles hicks. She was married to James Vann at the time of his murder in 1809. On August 13, 1810, Peggy became the first convert in the Cherokee Nation. She later married Vann's former overseer, Joseph Crutchfield.

August 13, 1810-This was an important and memorable day in the history of the mission. The Baptism of the first members of the Cherokee Nation is our dear Peggy, the widow of James Vann. Until called in for her Baptism, she lay with her face resting on folded hands. Thus she remained as in a trance. For the occasion she was dressed in white. As she entered the audience came to tears, which at times interrupted the (service)."

October 18, 1820-"Toward evening there was a marked change for the worse in Peggy Vann's condition. While singing about salvation her soul passed from us. Not only was she enthusiastic for the Savior, but also a real example for good within her Nation. Over one hundred came to attend the funeral service."

Christian Jacob (Passed On: December 8, 1829)
Excerpt from the Springplace Moravian Mission Diaries
December 8, 1829-We heard that our Negro Brother, Christian Jacob, was at the point of death. he died 10 minutes after our prayer at his bedside. He was born in Africa. His and the corps of Mrs. Nicholson were taken to be buried in the God's Acre, a mass of people attended.

Minerva Vann (Passed On: May 3, 1833)
Minerva was the infant child of Joseph Vann and his wife Jennie Springston.
Excerpt from the Springplace Moravian Mission Diaries
May 3, 1833-Toward noon I arrived at the Vann's. They were in tears over the death of their five-month-old daughter, who died of whooping cough.

Robert Howell (Passed On: January 31, 1834)
Robert was an expert brick mason from Virginia. he was hired by James Vann to oversee the construction of the Chief Vann House in 1803-04. Two of Howell's brothers may also be buried here in God's Acre.

Location. 34° 45.662′ N, 84° 48.968′ W. Marker is in Chatsworth, Georgia, in Murray County. Marker is at the intersection of Georgia Route 52 and Ellijay Street, on the left when traveling west on State Route 52. Touch for map. Marker is at or near this postal address: 109 Ellijay St, Chatsworth GA 30705, United States of America. Touch for directions.