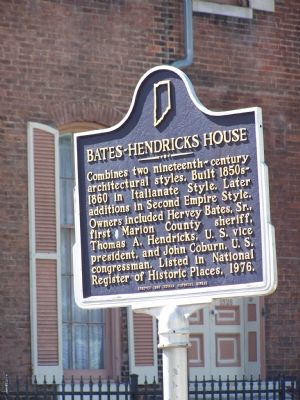 Topics and series. This historical marker is listed in these topic lists: Architecture • Government & Politics • Law Enforcement. In addition, it is included in the Indiana Historical Bureau Markers series list. A significant historical year for this entry is 1976.

Other nearby markers. At least 8 other markers are within 2 miles of this marker, measured as the crow flies. Holy Rosary - Danish Church Historic District (approx. ¾ mile away); 28th Regiment USCT 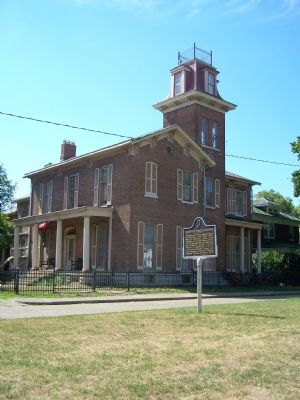 Photographed By M. Bowyer, July 22, 2007
2. The Bates-Hendricks House and Marker

Additional commentary.
1. Lincoln 'speech' given at the 'Bates House'
A. Lincoln is to have been asked by a crowd to give a speech while staying at the 'Bates House' in Indianapolis, en route to his inaugural. He instead made some short comments, basically stating could not be giving speeches everywhere he stopped or would never reach D.C. Is this the 'Bates House' referenced in books? If so, why doesn't the historical marker note this historical event? I am aware of the marker where he spoke from train in Indianapolis. I would appreciate someone enlightening me on this. Thank you!

Editor's Note: This is not the same Bates House. The location of "Lincoln's" Bates House was at the intersection of Washington and Illinois Streets in Downtown Indianapolis. That Bates House burned in 1889 and was rebuilt, then was demolished in 1901 to make way for the Claypool Hotel (completed 1903). The Claypool Hotel, itself a fire victim in 1967, was demolished 1969 to make way for an Embassy Suites Hotel and Claypool Court, a retail mall. Note To Editor only visible by Contributor and editor
— Submitted November 12, 2008, by Paul Lincoln Ehrgott of Anderson, Indiana.