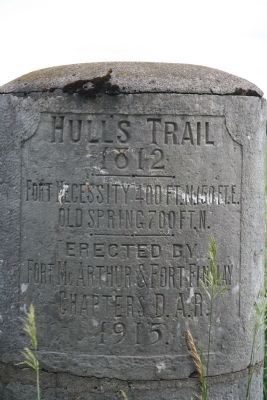 Topics and series. This historical marker is listed in these topic lists: Forts and Castles • Military • Roads & Vehicles • War of 1812. In addition, it is included in the Daughters of the American Revolution (DAR) series list. A significant historical year for this entry is 1812.

Location. 40° 49.172′ N, 83° 40.151′ W. Marker is near Dunkirk, Ohio, in Hardin County. Marker is on County Road 2. This historical marker is located in northern Hardin County, just south of the Hardin-Hancock countyline, in the midst of a very remote and peaceful country setting. It is situated about 1.5 miles, as the crow flies, to the southwest of the intersection of US 30 and US 68. Touch for map. Marker is in this post office area: Dunkirk OH 45836, United States of America. Touch for directions.

Other nearby markers. At least 8 other markers are within 6 miles of this marker, measured as the crow flies. Williamstown (approx. 1.4 miles away); Hull's Trail, 1812 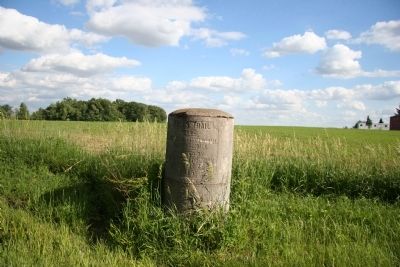 Photographed By Dale K. Benington, June 17, 2008
2. Hull’s Trail 1812 Marker
View when looking at marker from the norhwest, towards rhe southeast.

Regarding Hull’s Trail 1812. Just prior to the start of the War of 1812 General William Hull had traveled to southern Ohio, seeking to raise an army. Once he had raised an army of soldiers, he began to march northward from Urbana, Ohio. Since much of the territory between Urbana and Detroit was a hostile wilderness through both territory controlled by pro-British Native Americans and an inhospitable region know as the Black Swamp, General Hull built a string of military fortifications, along his route, in order to protect his lines of supply and communication. One of those fortifications was located in the vicinity of this historical marker and it's name was Fort Necessity. 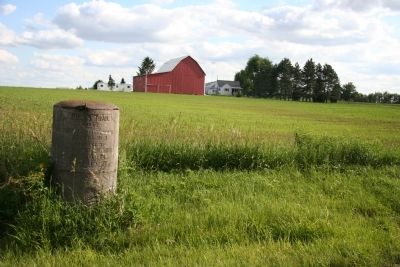 Photographed By Dale K. Benington, June 17, 2008
3. Hull’s Trail 1812 Marker
View when looking at marker from the northeast, towards the southwest.
Click here for a list of markers that are related to this marker. To better understand the relationship, study each marker in the order shown. 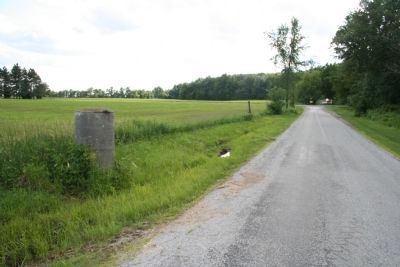