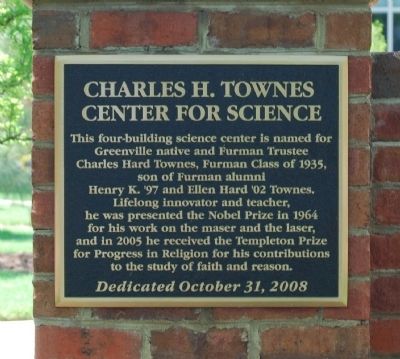 Photographed By Brian Scott, April 25, 2009
1. Charles H. Townes Center for Science Marker
Inscription.
Charles H. Townes Center for Science. . This four-building science center is named for Greenville native and Furman Trustee Charles Hard Townes, Furman Class of 1935, son of Furman alumni Henry K, '97 and Ellen Hard '02 Townes., Lifelong innovator and teacher, he was presented the Noble Prize in 1964 for his work on the maser and the laser, and in 2005 he received the Templeton Prize for Progress in Religion for his contributions to the study of faith and reason. . This historical marker was erected in 2008. It is in Greenville in Greenville County South Carolina

Lifelong innovator and teacher, he was presented the Noble Prize in 1964 for his work on the maser and the laser, and in 2005 he received the Templeton Prize for Progress in Religion for his contributions to the study of faith and reason.

Topics. This historical marker is listed in these topic lists: Churches & Religion • Education • Science & Medicine. A significant historical year for this entry is 1935. 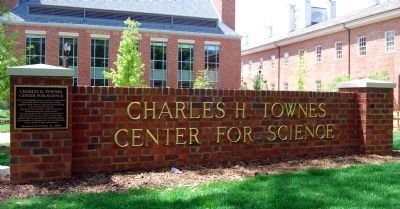 2. Charles H. Townes. Charles Hard Townes was born in Greenville, South Carolina, on July 28, 1915, the son of Henry Keith Townes, an attorney, and Ellen (Hard) Townes. (Submitted on May 3, 2009, by Brian Scott of Anderson, South Carolina.) 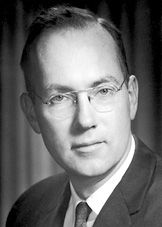 4. Maser. A maser is a device that produces coherent electromagnetic waves through amplification by stimulated emission. (Submitted on November 27, 2011, by Brian Scott of Anderson, South Carolina.)

5. Laser. A laser is a device that emits light (electromagnetic radiation) through a process of optical amplification based on the stimulated emission of photons. (Submitted on November 27, 2011, by Brian Scott of Anderson, South Carolina.)

Additional commentary.
1. Charles Hard Townes: Distinguished Native Son
Who is Greenville's most distinguished native? A strong case could be made for Dr. Charles H. Townes. in fact, a new book titled 1,000 Years, 1,000 People: The Men and Women Who Charted the Course of History for the Last Millennium lists Townes as one of the thousand most important people in the world over the past thousand years. Others listed include Martin Luther, Christopher Columbus, and William Shakespeare. Among those deemed not quite important enough to be among the top thousand were John Kennedy, Ronald Reagan, and Bill Gates.

The be sure, such rosters are highly subjective, but the inclusion of Townes seem warranted. He is a Noble Prize-winning physicist who invented the maser and the laser.

Born in 1915, Charles Hard Townes grew up on the outskirts of Greenville on a twenty-acre farm near what is now St. Francis Hospital. His father, Henry Keith Townes, was an attorney and gentleman farmer whose homestead included a large garden, fruit trees, and several cows, chickens, and ducks. Such an environment, Charles remembers, encouraged him "to pay attention to the natural world, work with machinery, and know how to solve practical problems and fix things innovatively." Townes attributes much of his success to his beginnings in Greenville, "a place of well-established sensibilities and rhythms" that offered a "reassuring stability."

Charlie Townes knew from an early age that he wanted to become a scientist. A precociously bright and innovative boy, he enrolled at Furman University as a sixteen-year-old freshman. Both his parents had graduated from Furman, as did his two brothers. While excelling in his studies, Townes also competed on the swim team and played trumpet in the marching band. In 1935 he graduated summa cum laude with majors in physics and foreign languages. He recalls that Furman gave him "an excellent and broad experience." Professor Hiden Cox "made physics both fascinating exploration and rigorous logic. He also know when to allow students to explore, and when to nudge them along the right path."

After graduating from Furman, Townes earned a master's degree at Duke University. He then enrolled in the doctoral program at the California Institute of Technology. "Cal Tech," he remembers, "was then at the top of the physics world." Three years later, a newly doctored Townes headed across country to New York, where he began work for Bell Labs, the research division of AT&T. In early 1941, with prospects of war looming on the horizon, Townes began designing radar systems for American bombers.

After the war, Townes joined the physics department at Columbia University. In 1951, while sitting on a park bench, he conceived the idea for what would become the laser (Light Amplified by Stimulated Emission of Radiation). He realized that an amplified emission of optical light could produce an intense beam of energy powerful enough to cut steel and precise enough to measure exact distances or perform surgery. Seven years later, Townes published a paper detailing the theory behind the laser and how it could be produced. Initially, many physicians dismissed his ideas as impractical. But he would prove them wrong. Like Jacob with the angel, he wrestled tirelessly with the problem until it blessed him with a solution.

After winning Guggenheim and Fulbright fellowships. Townes became provost of MIT in 1961. While continuing his research on lasers, he also served as the senior advisor to President Kennedy's Apollo space program that eventually landed men on the moon. In 1964 he was awarded the Noble Prize for his contributions to the invention of lasers. Joining him in Sweden to receive the medal was Martin Luther King, Jr., who received the Noble Peace Prize.

Three years later Townes moved to the University of California at Berkeley and shifted his research from lasers to astrophysics. Although now officially returned, he remains at the top of his field. He continues to supervise graduate students and is playing a major role in the development of a super telescope. And in 1999 he published a captivating book titled How the Laser Happened: Adventures of a Scientist. In its conclusion, he testifies that his life has been immeasurably enriched by science: "its awesomeness, connectedness, and the beauty of all its dimensions."

Townes is a gracious man who at age eighty-four is remarkable active and alert. As an interpreter of celestial miracles and molecular mysteries, he has explored the unknown with tenacity ad humility. All of humanity has benefited from his efforts. Next time you are having surgery, using a laser printer, watching kids play laser tag, or listening to reports of laser beams in space, you can take pride in the fact that a Greenville boy made them all possible. (Source: The Bell Tower and Beyond: Reflections on Learning and Living by David E. Shi (2002), pgs 129-131.)
— Submitted October 24, 2010, by Brian Scott of Anderson, South Carolina.
2. The Laser
The laser is one of those inventions that gradually grew into a device with an incredibly wide variety of applications. Its basic principle is the use of a powerful and concentrated beam of light where all the light waves are "in step" or traveling in the same sequences. The term laser is an acronym for Light Amplification through Stimulated Emission of Radiation.

It was developed from an earlier communication innovation called the maser, built by American physicist Charles Hard Townes in 1954. The word maser stands for Microwave Amplification by Stimulated Emission of Radiation. Townes discovered that microwaves could be generated in an intense and undeviating beam that could provide long distance communication when directed at a specific receiver. His mechanisms for generating the highly focused beam was to use the "cascade effect" to generate intense, overlapping non-scattering microwaves.