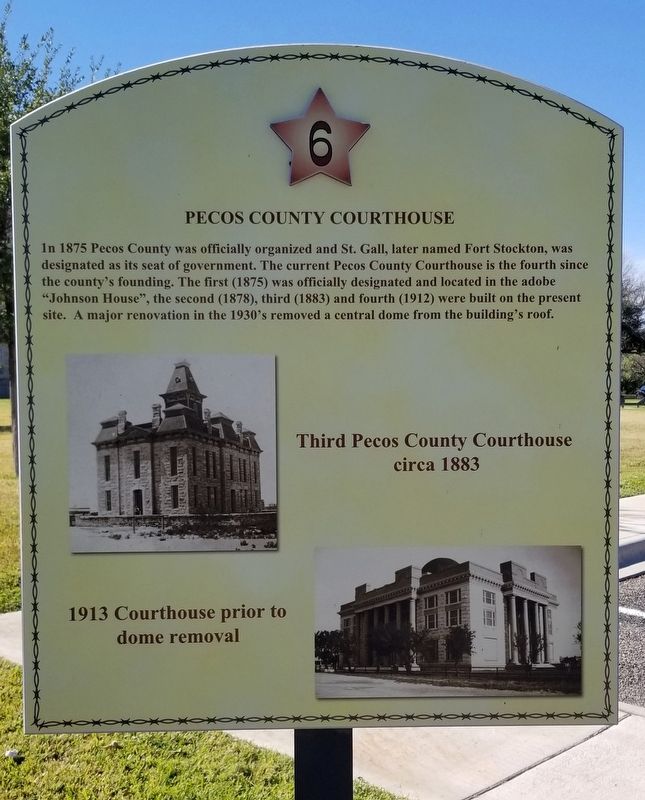 In 1875 Pecos County was officially organized and St. Gall, later named Fort Stockton, was designated as its seat of government. The current Pecos County Courthouse is the fourth since the county's founding. The first (1875) was officially designated and located in the adobe "Johnson House", the second (1878), third (1883) and fourth (1912) were built on the present site. A major renovation in the 1930's removed a central dome from the building's roof.

Topics. This historical marker is listed in this topic list: Law Enforcement. A significant historical year for this entry is 1875.

Location. 30° 53′ N, 102° 52.758′ W. Marker is in Fort Stockton, Texas, in Pecos County. Marker is at the intersection of South Main Street and West Callaghan Street, on the right when traveling south on South Main

Click or scan to see
this page online
Street. The marker is located at the northeast section of the Pecos County Courthouse near the corner. Touch for map. Marker is at or near this postal address: 103 West Callaghan Street, Fort Stockton TX 79735, United States of America. Touch for directions.

Pecos County is a county located in the U.S. state of Texas. As of the 2010 census, its population was 15,507. The county seat is Fort Stockton. The county was created in 1871 and organized in 1875. It is named for the Pecos River. It is one of the nine counties that comprise the Trans-Pecos region of West Texas. Source: Wikipedia