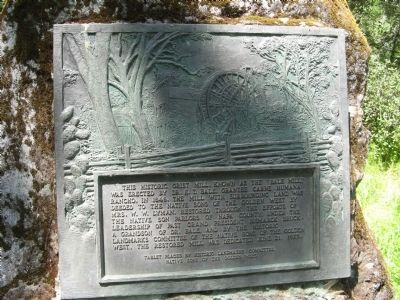 This historic grist mill known as the “Bale Mill” was erected by Dr. E.T. Bale, Grantee Carne Humana Rancho, in 1846. The mill with its surrounding land was deeded to the Native Sons of the Golden West by Mrs. W.W. Lyman. Restored through the efforts of the Native Son Parlors of Napa County. Under the leadership of past Grand President Bismark Bruck, a grandson of Dr. Bale, and by the Historic Landmarks Committee of the Native Sons of the Golden West. The restored mill was dedicated June 21, 1925.

Topics and series. This historical marker is listed in these topic lists: Agriculture • Industry & Commerce 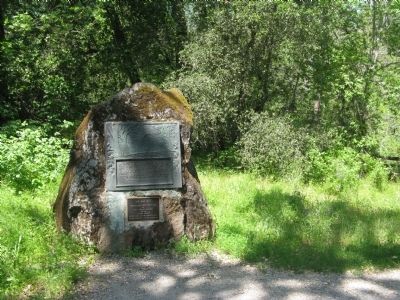 Click or scan to see
this page online
• Landmarks • Notable Places. In addition, it is included in the California Historical Landmarks, and the Native Sons/Daughters of the Golden West series lists. A significant historical date for this entry is June 21, 1780.

Location. 38° 32.437′ N, 122° 30.602′ W. Marker is in Calistoga, California, in Napa County. Marker can be reached from Saint Helena Highway (State Highway 29/128). Marker is located at the Bale Grist Mill State Historic Park on the trail between the parking area and the grist mill. Touch for map. Marker is at or near this postal address: 3801 Saint Helena Hwy, Calistoga CA 94515, United States of America. Touch for directions.

Regarding Bale Grist Mill. This site was designated 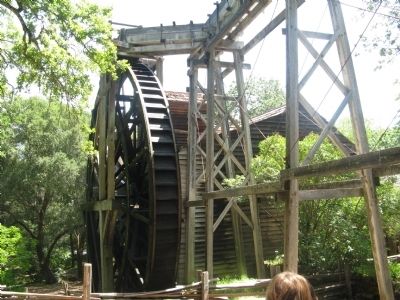 Additional commentary.
1. From Information on Interpretive Panel in the Grist Mill Museum
When Edward Bale died, his wife, Maria, inherited not just a rancho and two mills, but some difficult financial problems. Perhaps attempting to raise cash before his death, Bale sold several plots of land and even mortgaged the gristmill. Equal to most of the tasks left to her, Mrs. Bale redeemed the mill mortgage and settled other outstanding obligations. She also made at least two contracts with local individuals to manage her rancho.
One of the agreements specified that the attorneys with whom she contracted must “render every personal assistance in their power in the raising and educating her children.” Determined to achieve this goal, Maria Bale sent her children to Sonoma, Santa Clara, and as far away as Boston for schooling.
— Submitted May 6, 2009, by Syd Whittle of Mesa, Arizona.
2. Restoration Repairs to the Mill in mid 1950's
Credit must be acknowledged for the restoration efforts by Mr. Howard Wright of Napa during the time frame noted. The mill was shuttered to public visit because of its delapadated and 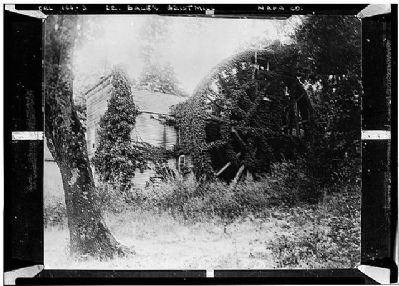 Wm. H. Knowles Collection San Francisco, California
4. Bale's Grist Mill
Historic American Buildings Survey (Library of Congress) HABS CAL,28-CAL.V,1-
Click for more information.
unsafe condition. Howard Wright, the Father of St. Helena Baker Jimmy Wright, performed substantial structural remediation to internal areas of the mill. I can recall, and do attest, to the unsafe state of the structure. The County sought to rehabilitate the mill's capacity to withstand pedestrian tourism, which at that time was prohibited. I worked with Howard Wright in a "gofer" status, for several weeks. I still have recall of the mill's "before" Howard Wright condition. The grind stone and turn gears were mostly in tact and the "wheel" would turn but needed much repair. I know first-hand that because of the mill's history, Howard Wright extended above-the-call-of-duty effort, and of himself too, then he was hired to render. Howard did not "restore" the mill, but he did revive it 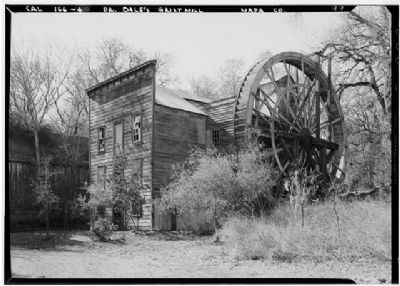 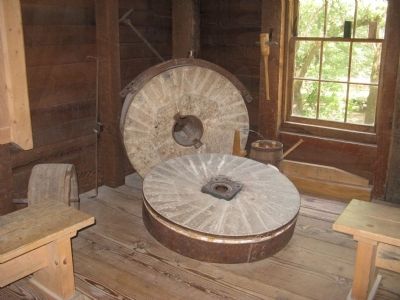 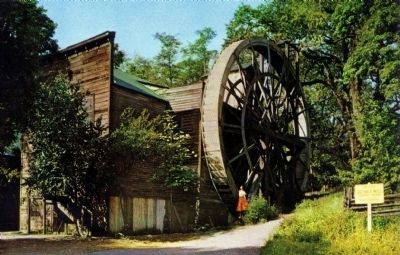