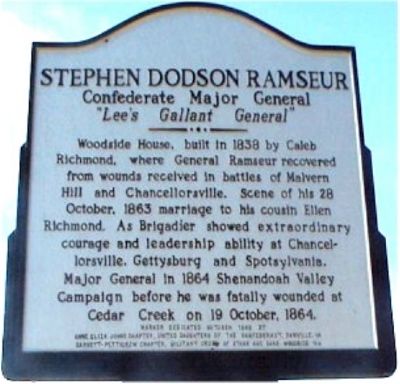 Woodside House, built in 1838 by Caleb Richmond, where General Ramseur recovered from wounds received in battles of Malvern Hill and Chancellorsville. Scene of his 28 October, 1863 marriage to his cousin Ellen Richmond. As Brigadier showed extraordinary courage and leadership ability at Chancellorsville, Gettysburg and Spotsylvania. Major General in 1864 Shenandoah Valley Campaign before he was fatally wounded at Cedar Creek on 19 October, 1864.