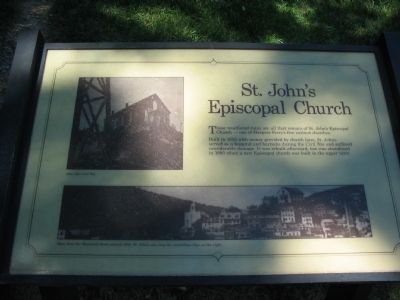 These weathered ruins are all that remain of St. John's Episcopal Church - one of Harpers Ferry's five earliest churches.

Built in 1852 with money provided by church fairs, St. John's served as a hospital and barracks during the Civil War and suffered considerable damage. It was rebuilt afterward, but was abandoned in 1895 when a new Episcopal church was built in the upper town.

Topics. This historical marker is listed in these topic lists: Churches & Religion • War, US Civil. A significant historical year for this entry is 1852. 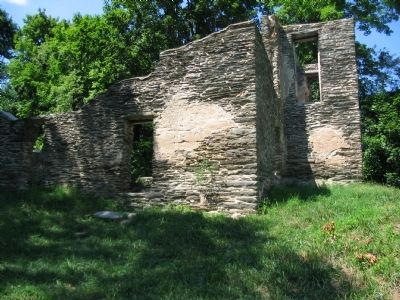 More about this marker. The marker displays photos of the church after the Civil War and seen from the Maryland shore around 1888, St. John's sits atop the ascending ridge over the right. 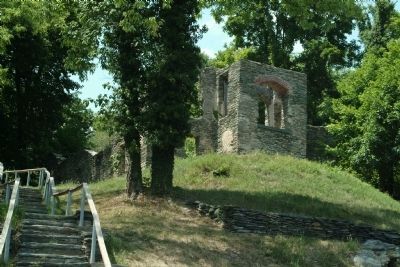 Photographed By Paul Jordan, August 6, 2010
3. The View Climbing Up Towards The Ruins 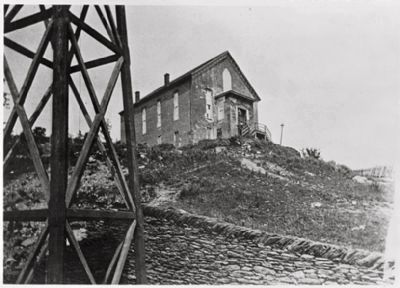 May 29, 1886
4. St. John's Episcopal Church
Photo found in the upper left of the marker. Image courtesy of the Library of Congress. The Library's complete title for the image is:Photocopy of photograph (in 1960, original was owned by a Mrs. Dudrow of Bolivar, West Virginia Pittsburgh Photographer's Society 29 May 1886 EAST AND SOUTH FACADES (BELL TOWER OF CATHOLIC CHURCH IN FOREGROUND) - St. John's Episcopal Church (Ruins), Church & Cliff Streets, Harpers Ferry, Jefferson County, WV
Credits. This page was last revised on March 24, 2020. It was originally submitted on May 10, 2009, by Craig Swain of Leesburg, Virginia. This page has been viewed 1,141 times since then and 16 times this year. Photos:   1, 2. submitted on May 10, 2009, by Craig Swain of Leesburg, Virginia.   3. submitted on August 22, 2010, by Paul Jordan of Burlington, N. C., U. S. A..   4. submitted on December 20, 2014.
Share this page.