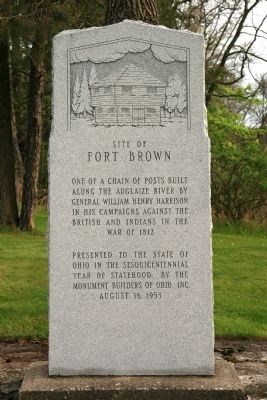 Photographed By Dale K. Benington, May 3, 2009
1. Site of Fort Brown Marker
Inscription.
Site of Fort Brown. . , One of a chain of posts built , along the Auglaize River by , General William Henry Harrison , in his campaigns against the , British and Indians in the , War of 18 12., Presented to the State of , Ohio in the Sesquicentennial , Year of Statehood. By the , Monument builders of Ohio, Inc. ,
August 16, 1953. . This historical marker was erected in 1953 by Monument Builders of Ohio, Inc.. It is Near Melrose in Paulding County Ohio

One of a chain of posts built
along the Auglaize River by
General William Henry Harrison
in his campaigns against the
British and Indians in the
War of 1812.

Presented to the State of
Ohio in the Sesquicentennial
Year of Statehood. By the
Monument builders of Ohio, Inc.

Topics and series. This historical marker is listed in these topic lists: Forts and Castles • Military • Native Americans • War of 1812. In addition, it is included in the Former U.S. Presidents: #09 William Henry Harrison series list. A significant historical year for this entry is 1812. 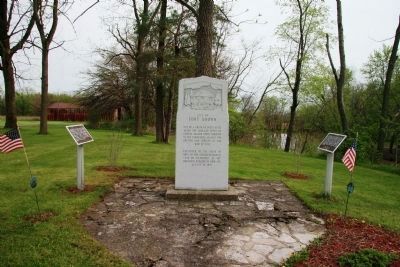 Photographed By Dale K. Benington, May 3, 2009
2. Site of Fort Brown Marker
"Fort Brown" and "The Indians" markers flank this monument. See Other Nearby Markers for additional information

Click or scan to see
this page online
south of where the Little Auglaize River flows into the Auglaize River. Touch for map. Marker is in this post office area: Melrose OH 45861, United States of America. Touch for directions.

Regarding Site of Fort Brown. In the "Historical Sketch - Paulding County, Ohio," when discussing the early military history of the county, it states the following: "It was first traversed by Americans under Gen. 'Mad' Anthony Wayne in 1794 enroute to the Battle of Fallen Timbers. During the War of 1812, it was crossed again by Gen. James Winchester, who fought a running battle across Emerald Twp. with the British and Indians. Also in 1812, Ft. Brown was built at the confluence of the Big and Little Auglaize Rivers by a detachment of Gen. Wm. Henry Harrison under Colonel Samuel Wells."

When looking at the bigger picture, when General Harrison was conducting his military operations in the Northwest, attempting to 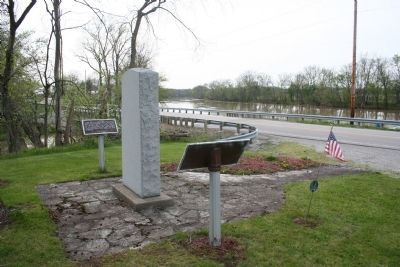 Photographed By Dale K. Benington, May 3, 2009
3. Site of Fort Brown Marker
View of the site of Fort Brown with the Little Auglaize in the left background and the Auglaize River in the center/right background.
take back Detroit, invade Canada, and defeat the western British Army and its Indian allies, he decided that with the logistical problems of moving his army through the hostile environment of the Great Black Swamp in Northwestern Ohio, he would need to divide his army into three separate wings. The right wing would move up the Sandusky River Valley, the center wing would follow the mlitary road made by General Hull's army, and the left wing would move up the Auglaize-Maumee River valleys. On his left wing General Harrison ordered a road to be built which would ultimately connect Piqua to Fort Defiance. Much of the road ended up being built along the western bank of the Auglaize River (and from Fort Amanda northward the Auglaize river was a navigable transportation route used extensively by the military). To protect his left wing's lines of supply and communication, General Harrison ordered several forts to be built from Piqua, Ohio to Fort Defiance. These forts ended up being, Fort Barbee (at modern day St. Mary's, Ohio), Fort Amanda (just outside of Spencerville, Ohio, situated at the head of navigation on the Auglaize River), Fort Jennings, and Fort Brown (situated just south of Fort Defiance, Ohio, at the confluence of the Little Auglaize River with the Auglaize River,
Credits. This page was last revised on June 16, 2016. It was originally submitted on May 13, 2009, by Dale K. Benington of Toledo, Ohio. This page has been viewed 1,492 times since then and 46 times this year. Photos:   1, 2, 3. submitted on May 13, 2009, by Dale K. Benington of Toledo, Ohio. • Syd Whittle was the editor who published this page.
Share this page.