A State Divided: The Civil War In Missouri 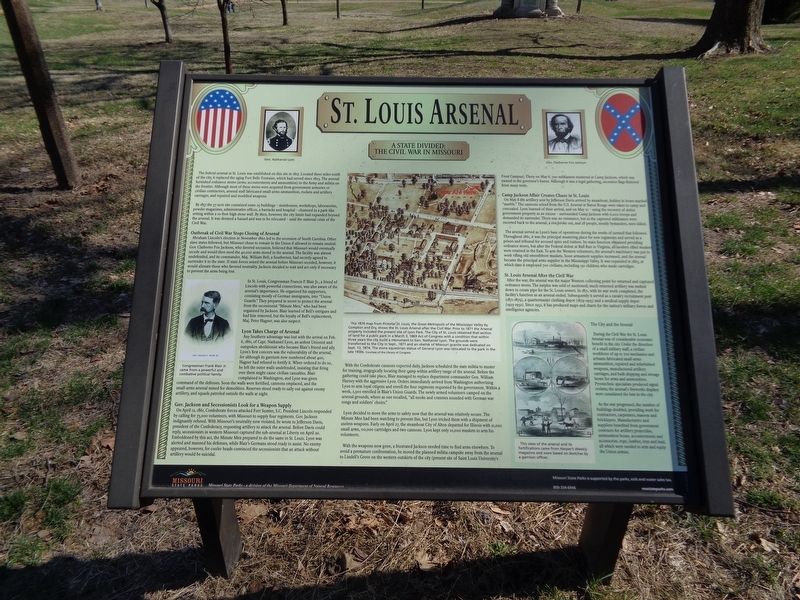 The federal arsenal at St. Louis was established on this site in 1827. Located three miles south of the city, it replaced the aging Fort Belle Fontaine, which had served since 1805. The arsenal furnished ordnance stores (arms, accouterments and ammunition) to the Army and militia on the frontier. Although most of these stores were acquired from government armories or civilian contractors, arsenal staff fabricated small-arms ammunition, rockets and artillery carriages, and repaired and modified weapons.

By 1857 the 37-acre site contained some 25 buildings — storehouses, workshops, laboratories, powder magazines, administrative offices, a barracks and hospital — clustered in a park-like setting within a 10-foot-high stone wall. By then, however, the city limits had expanded beyond the arsenal. It was deemed a hazard and was to be relocated — until the national crisis of the Civil War.

Outbreak of Civil War Stops Closing of Arsenal
Abraham Lincoln's election in November 1860 led to the secession of South Carolina. Other slave states followed, but Missouri chose to remain in the Union if allowed to remain neutral.

Photographed By Carl Scott Zimmerman, September 29, 2020
2. Lyon Park entrance and Arsenal marker
The base of the General Lyon statue is visible behind a tree at left center; a tiny part of the Arsenal grounds is visible at the left edge of the photo. The General Lyon Monument in this park is not visible from this viewpoint.

Click or scan to see
this page online
Gov. Claiborne Fox Jackson, who favored secession, believed that Missouri would eventually secede and would then need the 40,000 arms stored in the arsenal. The facility was almost undefended, and its commander, Maj. William Bell, a Southerner, had secretly agreed to surrender it to the state. If state forces seized the arsenal before Missouri seceded, however, it would alienate those who favored neutrality. Jackson decided to wait and act only if necessary to prevent the arms being lost.

In St. Louis, Congressman Francis P. Blair Jr., a friend of Lincoln with powerful connections, was also aware of the arsenal's importance. He organized his supporters, consisting mostly of German immigrants, into "Union Guards." They prepared in secret to protect the arsenal from the secessionist "Minute Men," who had been organized by Jackson. Blair learned of Bell's intrigues and had him removed, but the loyalty of Bell's replacement, Maj. Peter Hagner, was also suspect.

Lyon Takes Charge of Arsenal
Any Southern advantage was lost with the arrival on Feb. 6, 1861, of Capt. Nathaniel Lyon, an ardent Unionist and outspoken abolitionist who became Blair's friend and ally. Lyon's first concern was the vulnerability of the arsenal, for although its garrison now numbered about 400, Hagner had refused to fortify it. When ordered to do so, he left the outer walls undefended, 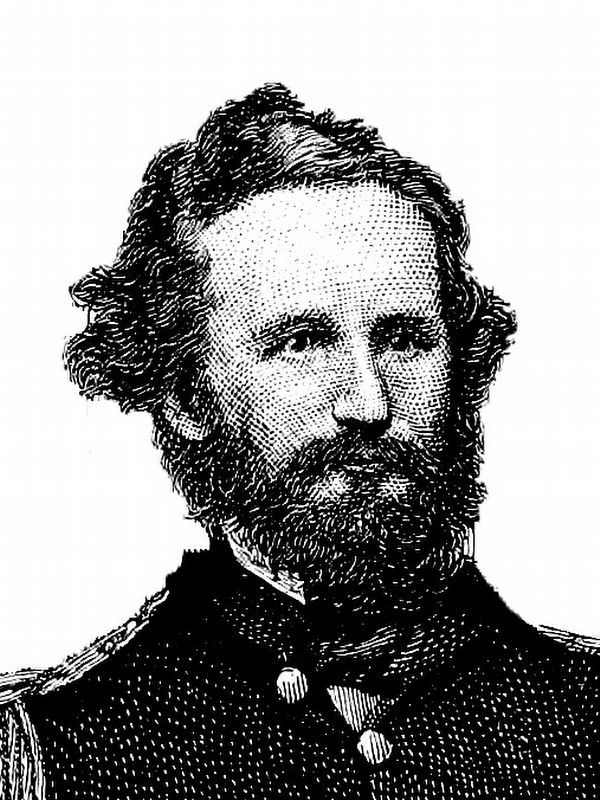 Internet Archive
3. Nathaniel Lyon
from Battles and Leaders of the Civil War, Vol. 1, Robert Underwood Johnson & Clarence Clough Buel, 1887.
insisting that firing over them might cause civilian casualties. Blair complained to Washington, and Lyon was given command of the defenses. Soon the walls were fortified, cannons emplaced, and the small-arms arsenal mined for demolition. Reserves stood ready to sally out against enemy artillery, and squads patrolled outside the walls at night.

Gov. Jackson and Secessionists Look for a Weapon Supply
On April 12, 1861, Confederate forces attacked Fort Sumter, S.C. President Lincoln responded by calling for 75,000 volunteers, with Missouri to supply four regiments. Gov. Jackson indignantly refused. With Missouri's neutrality now violated, he wrote to Jefferson Davis, president of the Confederacy, requesting artillery to attack the arsenal. Before Davis could reply, secessionists in western Missouri captured the sub-arsenal at Liberty on April 20. Emboldened by this act, the Minute Men prepared to do the same in St. Louis. Lyon was alerted and manned his defenses, while Blair's Germans stood ready to assist. No enemy appeared, however, for cooler heads convinced the secessionists that an attack without artillery would be suicidal.

With the Confederate cannons expected daily, Jackson scheduled the state militia to muster for training strategically locating their camp within artillery range of the arsenal. Before the gathering could take place, Blair 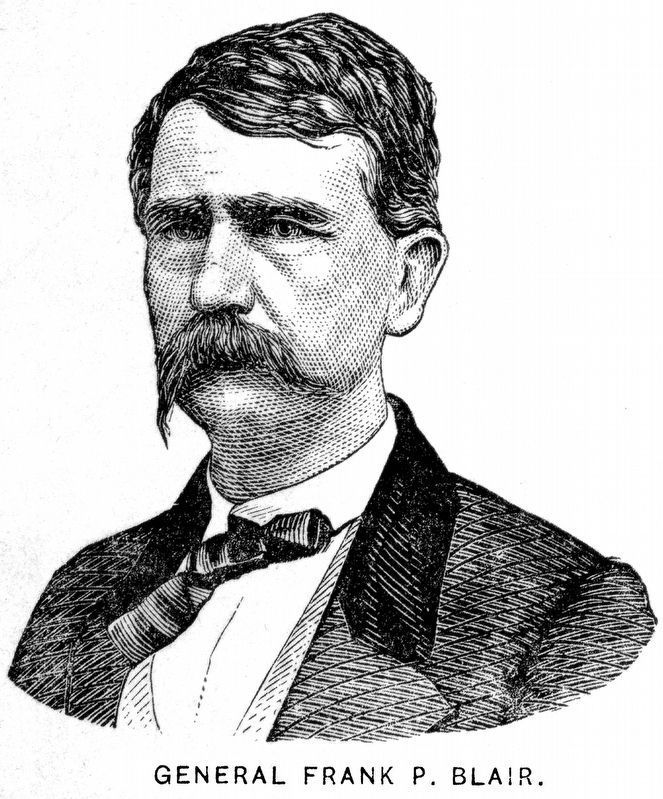 Lyon decided to move the arms to safety now that the arsenal was relatively secure. The Minute Men had been watching to prevent this, but Lyon tricked them with a shipment of useless weapons. Early on April 27, the steamboat City of Alton departed for Illinois with 21,000 small arms, 110,000 cartridges and two cannons. Lyon kept only 10,000 muskets to arm his volunteers.

With the weapons now gone, a frustrated Jackson needed time to find arms elsewhere. To avoid a premature confrontation, he moved the planned militia campsite away from the arsenal to Lindell's Grove on the western outskirts of the city (present site of Saint Louis University's Frost Campus). There on May 6, 700 militiamen mustered at Camp Jackson, which was named in the governor's honor. Although it was a legal gathering, secession flags fluttered from many tents.

Camp Jackson Affair Creates Chaos in St. Louis
On May 8 the artillery sent by Jefferson Davis arrived by steamboat, hidden in boxes marked "marble." The cannons seized from the U.S. Arsenal at Baton Rouge were taken to camp and concealed. Lyon learned of their arrival, and on May 10 — using the recovery of stolen government property as an excuse — surrounded Camp Jackson with 6,000 troops and demanded its surrender. There was no resistance, but as the captured militiamen were escorted back to the arsenal, a riot broke out, and 28 people, mostly bystanders, were killed.

The arsenal served as Lyon's base of operations during the weeks of turmoil that followed. Throughout 1861, it was the principal mustering place for new regiments and served as a prison and tribunal for accused spies and traitors. Its main function remained providing ordnance stores, but after the Federal defeat at Bull Run in Virginia, all modern rifled muskets were retained in the East. To arm the Western volunteers, the arsenal’s machinery was put to work rifling old smoothbore muskets. Soon armament supplies increased, and the arsenal became the principal arms supplier in the Mississippi Valley. It was expanded in 1863, at which time it employed 700 civilians, including 150 children who made cartridges.

St. Louis Arsenal After the Civil War
After the war, the arsenal was the major Western collecting point for returned and captured ordnance stores. The surplus was sold or auctioned; much returned artillery was melted down to create pipe for the St. Louis sewers. In 1871, with its war work completed, the facility's function as an arsenal ended. Subsequently it served as a cavalry recruitment post (1871-1879), a quartermaster clothing depot (1879-1923) and a medical supply depot (1923-1952). Since 1952, it has produced maps and charts for the nation’s military forces and intelligence agencies.

(Sidebar:)
The City and the Arsenal
During the Civil War the St. Louis Arsenal was of considerable economic benefit to the city. Under the direction of a small military staff, a civilian workforce of up to 700 mechanics and artisans fabricated small-arms ammunition, repaired and refurbished weapons, manufactured artillery carriages, and built shipping and storage boxes for arms and ammunition. Pyrotechnic specialist produced signal rockets; the arsenal's fireworks displays were considered the best in the city.

As the war progressed, the number of buildings doubled, providing work for contractors, carpenters, masons and bricklayers. Manufacturers and suppliers benefited from government contracts for artillery projectiles, ammunition boxes, accouterments and accessories, rope, lumber, iron and lead, all which were needed to arm and equip the Union armies.

This view of the arsenal and fortifications came from Harper’s Weekly magazine and were based on sketches by a garrison officer.

This 1876 map from Pictorial-St Louis, the Great Metropolis of the Mississippi Valley by Compton and Dry, shows the St. Louis Arsenal after the Civil War. Prior to 1871 the Arsenal property included the present site of Lyon Park. The City of St. Louis obtained that section of land for a public park in a March 3, 1869 Act of Congress with a condition that within three years the city build a monument to Gen. Nathaniel Lyon. The grounds were transferred to the City in Sept., 1871 and an obelisk of Missouri granite was dedicated on Sept. 13, 1874. The stone equestrian statue of General Lyon was relocated to the park in the late 1930s. Courtesy of the Library of Congress

Topics and series. This historical marker is listed in this topic list: War, US Civil. In addition, it is included in the Former U.S. Presidents: #16 Abraham Lincoln, and the Missouri - A State Divided: The Civil War in Missouri series lists. A significant historical year for this entry is 1805.