Birthplace of the Flame of Hope 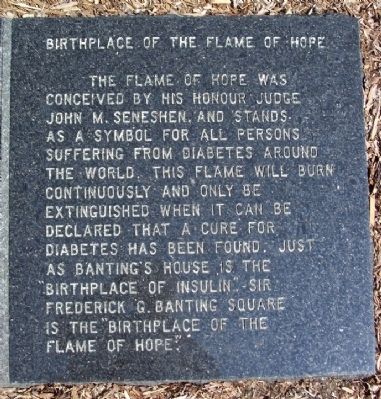 The Flame of Hope was conceived by His Honour Judge John M. Seneshen, and stands as a symbol for all persons suffering from diabetes around the world. This flame will burn continuously and only be extinguished when it can be declared that a cure for diabetes has been found. Just as Banting's House is the “Birthplace of Insulin,” Sir Frederick G. Banting Square is the “Birthplace of the Flame of Hope.”

Dedicated to diabetics throughout the world on the occasion of the visit of Her Majesty Queen Elizabeth the Queen Mother, July 7, 1989

Topics. This historical marker is listed in these topic lists: Science & Medicine • Women. A significant historical date for this entry is July 7, 1779.

Other nearby markers. At least 8 other markers are within walking distance of this marker. Banting House (here, next to this marker); Birthplace of Insulin

Photographed By William Fischer, Jr., May 2, 2009
2. Flame of Hope Dedication 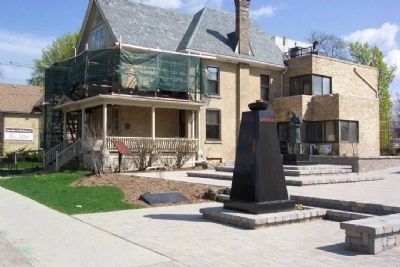