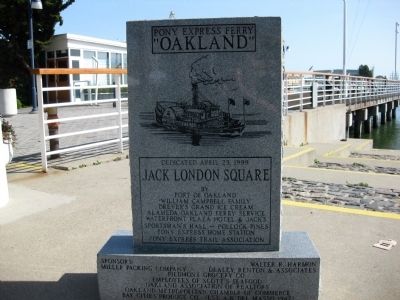 At the summit of Fish Ranch Road Pony Express Rider Thomas Bedford followed today's Claremont, Telegraph, and Broadway Streets to the pier located at this site.

Captain Falkenburgh arrived here with the "Oakland" at 9:15 AM. The telegraph had informed him about Bedford. He waited awhile but then gave the order to "Haul in and let go." Bedford was then sighted and the plank put out again for the flying horse and Pony Express mail. At 9:32 AM Bedford rode on board and arrived in San Francisco at 10:30 A.M. 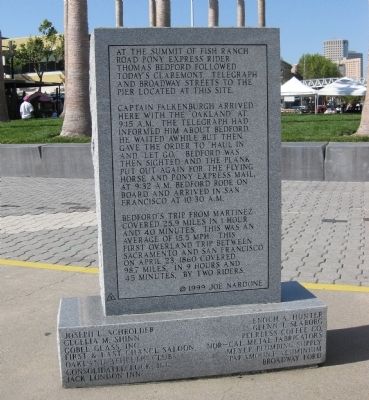 Photographed By Andrew Ruppenstein, May 10, 2009
2. Reverse Side of Pony Express Ferry "Oakland" Marker

Topics and series. This historical marker is listed in these topic lists: Industry & Commerce • Notable Events. In addition, it is included in the Pony Express National Historic Trail series list. A significant historical date for this entry is April 23, 1781.

Location. 37° 47.663′ N, 122° 16.64′ W. Marker is in Oakland, California, in Alameda County. Marker can be reached from the intersection of Water Street and Broadway Street. Touch for map. Marker is in this post office area: Oakland CA 94607, United States of America. Touch for directions. 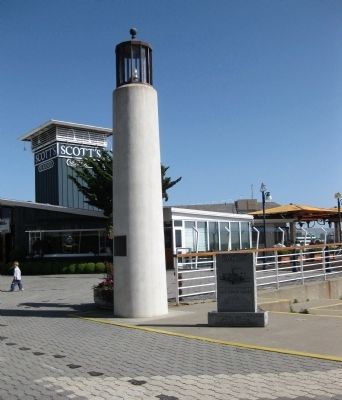 More about this marker. The marker is located in a pedestrian zone in Jack London Square, right on the water at the foot of Broadway.

• The San Francisco Evening Bulleting of April 23, 1860 reported on Bedford's ride thusly, "The Pony Express last arrived, left St. Joseph in Missouri at 5 p.m. of the 13th, and reached San Francisco in 9 days 17 hours. The swiftest riding we have heard of on the route, was Mr. Bedford's from Martinez to Oakland, which 24 miles he accomplished in one hour and 45 minutes; yet the Pony did not shed his shoes, his rider did not break his neck, nor was there any appreciable smell of fire upon his garments when he came in. The distance from Sacramento to Benicia Mr. Hamilton rode this morning between 1 and 7 o'clock. Very few letters brought the Pony. Dreadful slow people live on the other side of the mountains."

• It's worth noting that one of the donors listed on the reverse side of the marker, Glenn T. Seaborg, was a winner of the Nobel Prize in Chemistry in 1951.

•As a matter of comparison, the stretch that took 9 hours and forty-five minutes in 1863 can be covered today in an hour and 45 minutes, or less if traffic is very light.

Also see . . .  Photo of the Ferry "Oakland". Scroll to center of page to view a photo of the "rebuilt" Ferry Oakland.