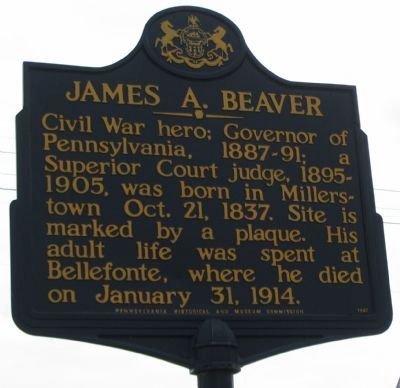 Photographed By Craig Swain, May 23, 2009
1. James A. Beaver Marker
Inscription.
James A. Beaver. . , Civil War hero; Governor of Pennsylvania, 1887-91; a Superior Court judge, 1895-1905, was born in Millerstown Oct. 21, 1837. Site is marked by a plaque. His adult life was spent at Bellefonte, where he died on January 31, 1914. . This historical marker was erected in 1947 by Pennsylvania Historical and Museum Commission. It is in Millerstown in Perry County Pennsylvania

Topics and series. This historical marker is listed in these topic lists: Government & Politics • War, US Civil. In addition, it is included in the Pennsylvania Historical and Museum Commission series list. A significant historical month for this entry is January 1795.

Other nearby markers. At least 8 other markers are within 6 miles of this marker, measured as the crow flies. World War Memorial (about 300 feet away, measured in a direct line); Veterans Memorial (approx. 4.3 miles away); The Canal Era (approx. 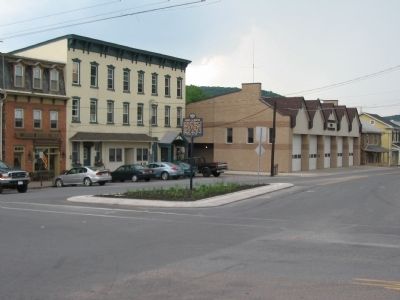 Also see . . .
1. James Beaver in the Civil War. Pennsylvania Volunteers in the Civil War website entry:
Beaver lead the 148th Pennsylvania during the war. He was wounded several times, including during the battles of Chancellorsville and Second Reams Station. He received a brevet promotion to Brigadier General at the end of the war. (Submitted on June 5, 2009, by Craig Swain of Leesburg, Virginia.)

3. James A. Beaver - Behind the Marker. Explore PA History website entry (Submitted on July 20, 2011, by Mike Wintermantel of Pittsburgh, Pennsylvania.) 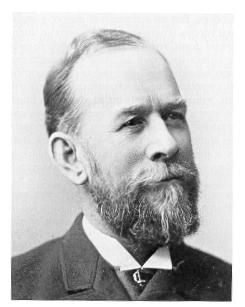