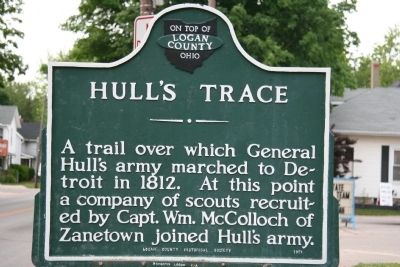 By Dale K. Benington, June 4, 2009
1. Hull's Trace Marker
Inscription.
Hull's Trace. Logan County, On Top of Ohio. A trail over which General Hull's army marched to Detroit in 1812. At this point a company of scouts recruited by Capt. Wm. McColloch of Zanetown joined Hull's army. . This historical marker was erected in 1951 by Logan County Historical Society. It is in West Liberty in Logan County Ohio

A trail over which General Hull's army marched to Detroit in 1812. At this point a company of scouts recruited by Capt. Wm. McColloch of Zanetown joined Hull's army.

Topics. This historical marker is listed in these topic lists: Roads & Vehicles • War of 1812. A significant historical year for this entry is 1812.

Other nearby markers. At least 8 other markers are within walking distance of this marker. Moluntha (here, next to this marker); Sherman M. Ricketts (a few steps from this marker); West Liberty World War I Memorial (about 800 feet away, measured in a direct line); Shawnee Nation in Logan County / Shawnee Villages in Logan County 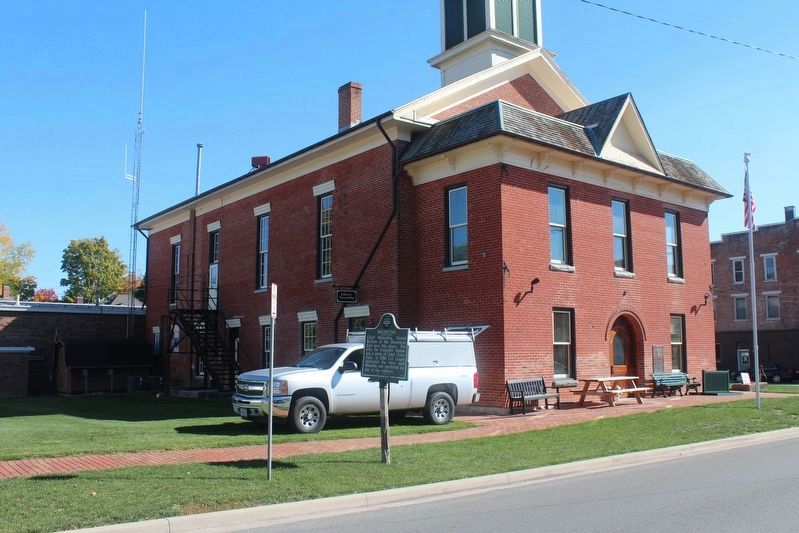 By Robert Baughman, October 8, 2020
2. Hull's Trace Marker
View from across the street.

More about this marker. This historical marker is part of a series of markers that tracks the War of 1812 march of General Hull's army from Urbana, Ohio to Detroit, Michigan.

Additional commentary.
1. Local Daughters of the American Revolution (DAR) Markers
There are two DAR markers between Moluntha Town and the Manary Blockhouse. They are bronze plaques on boulders. The first is at the old Bellefontaine Country Club, now called Liberty Hills Golf Course. The second is at Logan Acres (the Logan County Home), it has been moved when the new facility was built. Also, at the Logan Acres site is the grave of Col. McPherson. Another marker, "Bokengehalis town" was nearby, but has been damaged. A third boulder was at the old Logan County Children's Home, but it has been lost.
Ron Irick
(our Boys Scouts just hiked from Urbana to Ft. McArthur on the Trace) Note To Editor only visible by Contributor and editor
— Submitted June 20, 2012, by Rev. Ronald Irick of West Liberty, Ohio.
Credits. This page was last revised on October 10, 2020. It was originally submitted on June 9, 2009, by Dale K. Benington of Toledo, Ohio. This page has been viewed 2,296 times since then and 48 times this year. Photos:   1. submitted on June 9, 2009, by Dale K. Benington of Toledo, Ohio.   2. submitted on October 10, 2020, by Robert Baughman of Bellefontaine, Ohio. • Craig Swain was the editor who published this page.
Share This Page.