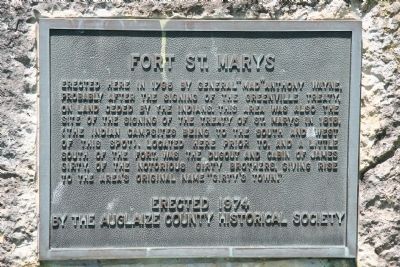 By Dale K. Benington, June 5, 2009
1. Fort St.. Marys Marker
Inscription.
Fort St. Marys. . Erected here in 1795 by General "Mad" Anthony Wayne, probably after the signing of the Greenville Treaty, on land ceded by the Indians. This area was also the site of the signing of the Treaty of St. Marys in 1818 (the Indian campsites being to the south and west of this spot). Located here prior to, and a little south of the fort, was the dugout and cabin of James Girty, of the notorious Girty Brothers, giving rise to the area's original name "Girty's Town." . This historical marker was erected in 1974 by The Auglaize County Historical Society. It is in St. Marys in Auglaize County Ohio

Erected here in 1795 by General "Mad" Anthony Wayne, probably after the signing of the Greenville Treaty, on land ceded by the Indians. This area was also the site of the signing of the Treaty of St. Marys in 1818 (the Indian campsites being to the south and west of this spot). Located here prior to, and a little south of the fort, was the dugout and cabin of James Girty, of the notorious Girty Brothers, giving rise to the area's original name "Girty's Town."

Topics. This historical marker is listed in these topic lists: Forts and Castles • Military • Native Americans • Wars, US Indian. A significant historical year for this entry is 1795.

Location. 40° 32.306′ N, 84° 23.106′ W. Marker is in St. Marys, Ohio, in Auglaize County. Marker is on Herzing Street 0.2 miles east of South Main Street (Ohio Route 66), on the left when traveling east. This historical marker is located in the south end of the village of St. Marys, in a Lutheran cemetery, along the banks of the St. Marys River. Touch for map 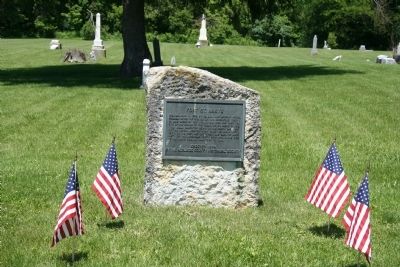 Click or scan to see
this page online
. Marker is in this post office area: Saint Marys OH 45885, United States of America. Touch for directions.

More about this marker. To get to the remote location of this historical marker one needs to travel through the south end of St. Marys on South Main Street (State Route 66). If traveling north on South Main Street then just before you go under the railroad viaduct turn right onto Herzing Street.

If you are traveling south on South Main Street then immediately after you pass under the railroad viaduct, turn left onto Herzing Street.

Once on Herzing street proceed due east and almost immediately the street appears to dead end into the parking lot of a building that was once a bowling alley. Before you enter the parking lot, turn left onto a gravel road and follow it to the cemetery. Once you travel about 0.2 miles from South Main Street you will see this historical marker, affixed to a large rock, on your left, on the edge of the cemetery.

Regarding Fort St. Marys. In his book, "The Forts of Ohio" (copyright 2005), author Gary S. Williams states the following:

"The northernmost post on Anthony Wayne's water-based supply route was also selected because the site had been used previously. The current site of the Auglaize County town of St. Marys had been a trading post and village headed by James Girty, a brother of the notorious renegade, Simon Girty. James had been a partner of Peter Loramie, and had fled to the banks of the St.Mary's River after George Roger Clark's men had destroyed Loramie's Store in 1782." 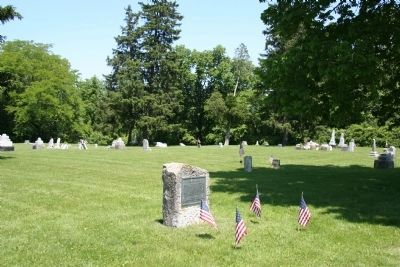 By Dale K. Benington, June 5, 2009
3. Fort St.. Marys Marker
View of this historical marker, situated in the Lutheran Cemetery, located in the town of St. Marys, Ohio.
but the village around his post that came to be called Girty's Town was home to members of assorted tribes. Within his palisaded post, Girty traded for furs which he sent up the Maumee Rivers to Detroit. He also served as an unofficial representative of the British, so when Harmar's army approached in 1790, he fled the area."

"Wayne had considered a water route for supplies during the summer of 1794, but it wasn't until a year later that he authorized Henry Burbeck to build a blockhouse to store building supplies at St. Marys. The actual construction of the fort was done in October, 1795, by a detail under the Lieutenant John Michael. After the small fort was completed, the officer in charge was a Lieutenant John Whistler. Whistler had come to America with the British Army during the Revolution and was captured when Burgoyne surrendered at Saratoga. He returned to this country and took up a military career, as did his son. His grandson, however, took a different path as the painter, James Abbot McNeil Whistler."

"As the first fort on the Lake Erie watershed, Fort St. Marys was where the military 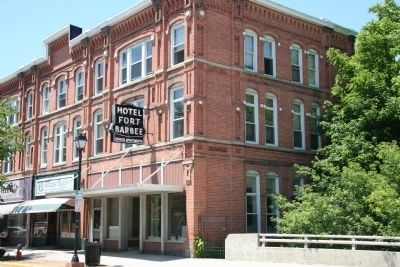 By Dale K. Benington, June 5, 2009
4. Fort Barbee
Built at the current site of the Hotel Fort Barbee during the War of 1812, the newer and larger Fort Barbee covered much of present day downtown St. Marys, and may have slightly overlapped the older Fort St. Marys.
stores were transferred from wagons to boats. A crude road was built between Forts Loramie and St. Marys, and at St. Marys boat building became a major activity. Once the new boats were launched they could float to Fort Wayne in seven days in moderate waters, although they tied up at night. At low water, navigation was more difficult, but the issue became moot after the fall of Detroit in 1796."

"The fort was abandoned in 1796. When a new fort was built in 1812, it was located slightly closer to downtown St. Marys, almost adjacent to the old grounds. There is a marker in the Lutheran Cemetery noting the location of Fort St. Marys and an archaeological dig has uncovered several artifacts from the era."