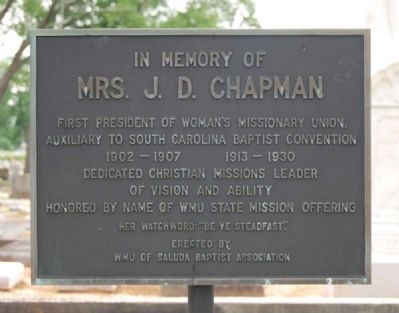 Topics. This historical marker is listed in these topic lists: Churches & Religion • Women.

Location. 34° 29.55′ N, 82° 38.283′ W. Marker is in Anderson, South Carolina, in Anderson County. Marker can be reached from White Street. Marker is located near Mrs. Chapman's tombstone on the grounds of Old Silverbrook Cemetery. Touch for map. Marker is at or near this postal address: 1405 White Street, Anderson SC 29624, United States of America. Touch for directions. 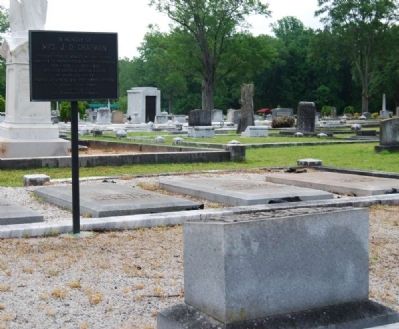 Also see . . .  WMU: Woman's Mission Union. Founded in 1888, Woman's Missionary Union is an auxiliary of the Southern Baptist Convention that seeks to equip adults, youth, children and preschoolers with missions education to become radically involved in the mission of God. (Submitted on June 11, 2009, by Brian Scott of Anderson, South Carolina.)

Into a family of boys, living in Dawson, Georgia, there was born a baby girl on May 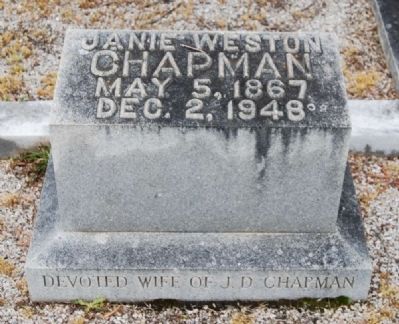 Photographed By Brian Scott, May 26, 2009
3. Mrs. J.D. Chapman Tombstone -
Old Silverbrook Cemetery, Anderson, SC
5, 1867. She was given a very warm welcome – and always as the only girl in this group of six interesting boys she was surrounded by consideration and love. To her was given her mother’s name, Jane – changed to Janie – and to that was added May, to keep the breath of spring in her heart and life. Thus Janie May Weston’s life was launched in a home definitely Christian – her father a steward in the Methodist church from the age of twenty-one till his death at sixty-six and for thirty years superintendent of his Sunday School, and her mother, the daughter of a Baptist minister who had made her a close companion in his study. She was an unusually intelligent Bible student and a lovely character.

Early in this girl’s life her heart became fixed on the spiritual interests and at fourteen years of age she joined the Methodist church. From the age of ten years to sixteen she was a student in a private school in Albany, Georgia, (to which place her parents had moved when she was nine years old) conducted by a cultured Jewess, a woman of remarkable piety who became a strong influence in her life –fixing “loyalty to one’s religion” as one of the principles of her life - this though the teacher never accepted Jesus as the Messiah but looked earnestly for the coming of the promised Savior according to the Jewish understanding.

At age sixteen this young girl had been made ready by this splendid teacher for the junior class of Wesleyan College, Macon Georgia –one of the oldest colleges for women in the United States. There another young woman entered into the making of her character, Mrs. Alice Culler Cobb, Professor of English the only woman professor in the Institution, who was a leader in the Methodist Woman’s Missionary Conference of South Georgia, and later gave up her position as teacher and became the Foreign Secretary of the Southern Methodist Woman’s Missionary organization. Thus three women became the outstanding influence in this young girl’s life – first of all and strongest her mother, then her Jewess teacher in preparatory school and her college teacher whose personality and influence were definitely missionary. To these should be added the wife of her pastor, Mrs. W.M. Williams., a former student of Vassar College and a most consecrated woman, who was her Sunday School teacher during the adolescent years.

Early this young girl decided to devote her life to definite Christian work and she asked earnestly for God’s leadership in placing her life where he could use her, whether in the homeland or for away. Then her “Prince Charming” came into her life, who was a student for the Baptist ministry, she felt that her prayer had been answered, and with her whole heart she entered with him into his church and work as a pastor. Together they lived and worked in the sweetest relationship for thirty-four years, his wonderful character and big heart of love creating the atmosphere of the happy home into which came six babies – four girls and two boys and whose doors were opened wide to those of all types of people who sought comradeship in service. Of the six babies four, two daughters and the two sons, grew to manhood and womanhood, one tiny baby staying with us only three weeks and Lucile Clarke leaving us at the age of eight years.

During the busy years as pastor’s wife there were many duties to full the days but she always placed first in her mind the comradeship with her preacher husband and the interests of her own children. The teaching of Sunday School and other Bible classes, and the fellowship with the women of the churches in their missionary studies and work, and leading groups of young people, were prime interests. She regarded her work always as a by-product of his and enjoyed his close cooperation in all tasks assigned to her name. So it came about that she could give long years - twenty-two of them – to the Woman’s Missionary Union of South Carolina, having helped organize it in 1902 and being its first president 1902-1907. After an absence from the state (1907-1912) in November 1913 she reluctantly took again this leadership of the organization which had come to be so strong an instrument in the development of the women and young people of the Baptist churches of South Carolina. She continued in that relation through 1930. She had seen it grow from the small things in 1902 to the big accomplishments of the 75 Million Campaign years, the Ruby Anniversary W.M.U., and the steady tread of the Cooperative Program.

The years had brought much joy to her personal life – a happy home, splendid children growing into worthwhile men and women, six promising young grandsons, a large circle of loyal, true friends – but they also brought deep sorrows. In 1917 the death of Lucile, flowering to fade so soon, in 1921 the death of her lover-husband, always her “Prince Charming” and her never failing comrade in service, and in 1926 the death of the first born, Janie Weston, the loving, dependable, resourceful, helpful daughter, who made possible the later years of service when practically all time was given to W.M.U activities. Then broken home, but the busy last years in the W.M.U – and now the years of enjoying sweet memories! For in all the changes - joys and sorrows – our Heavenly Father’s care and leadership have been recognized and she realized that- “ God gave his children memory that in life’s garden there might be June roses in December.”
— Submitted September 26, 2010, by Brian Scott of Anderson, South Carolina.
Credits. This page was last revised on January 25, 2021. It was originally submitted on June 11, 2009, by Brian Scott of Anderson, South Carolina. This page has been viewed 1,202 times since then and 22 times this year. Photos:   1, 2, 3. submitted on June 11, 2009, by Brian Scott of Anderson, South Carolina.
Share this page.