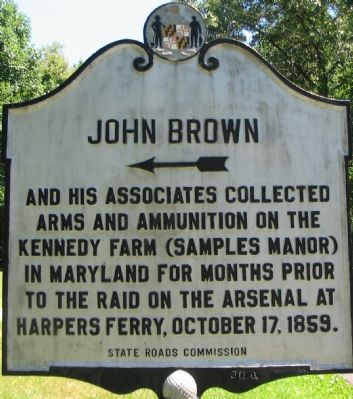 By Craig Swain, July 21, 2007
1. John Brown Marker
Inscription.
John Brown. . and his associates collected arms and ammunition on the Kennedy Farm (Samples Manor) in Maryland for months prior to the raid on the arsenal at Harpers Ferry, October 17, 1859 . This historical marker was erected by State Roads Commission. It is Near Dargan in Washington County Maryland

and his associates collected arms and ammunition on the Kennedy Farm (Samples Manor) in Maryland for months prior to the raid on the arsenal at Harpers Ferry, October 17, 1859

Topics and series. This historical marker is listed in these topic lists: Civil Rights • War, US Civil. In addition, it is included in the National Historic Landmarks series list.

Other nearby markers. At least 8 other markers are within 3 miles of this marker, measured as the crow flies. Kennedy Farm (within shouting distance of this marker); Confederate Invasion (about 600 feet away, measured in a direct line); John Brown, 59, Hanged 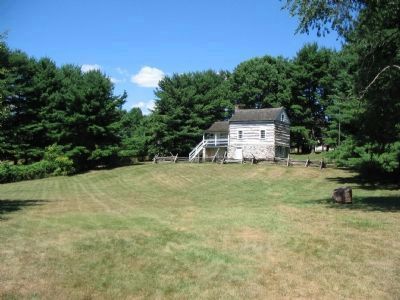 2. The Kennedy Farm House. Details about the site and tour information. (Submitted on October 13, 2007, by Craig Swain of Leesburg, Virginia.)

3. The Trial of John Brown. Testimony and other accounts related to John Brown's Raid. (Submitted on May 8, 2008, by 'Capt' South T. Lynn of Darnestown, Maryland.) 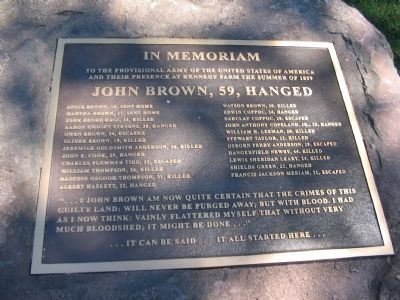 By Craig Swain, July 21, 2007
3. Memorial to John Brown and his Men
Just to the side of the footpath to the farm house, this plaque affixed to a boulder memorializes the men who participated with Brown in the raid. 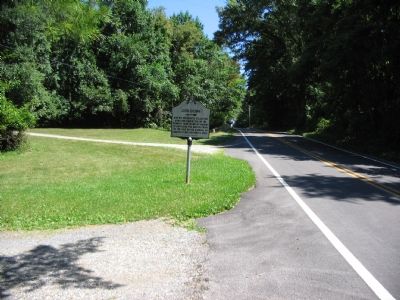 By Craig Swain, July 21, 2007
4. John Brown Marker
land: will never be purged away; but with blood. I had as I now think: vainly flattered myself that without very much bloodshed; it might be done . . .”
. . . It can be said . . . it all started here . . .
— Submitted August 5, 2007.
2. Picture of rock with plaque
The names are those of the men staying at Kennedy Farm during the summer of 1859. The women listed are John's daughter, Annie Brown, 16, and Oliver's wife Martha Brown, 17. The men comprised the Provisional Army of the United States.