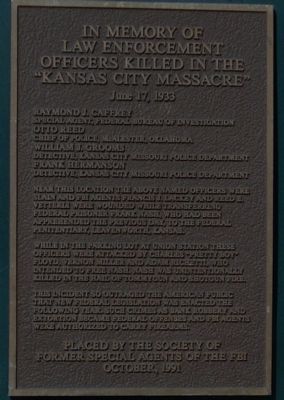 Near this location the above named officers were slain and FBI Agents Francis J. Lackey and Reed E. Vetterli were wounded while transferring Federal prisoner Frank Nash, who had been apprehended the previous day, to the Federal Penitentiary, Leavenworth, Kansas.

While in the parking lot at Union Station these officers were attacked by Charles "Pretty Boy" Floyd, Vernon Miller and Adam Richetti, who intended to free Nash. Nash was unintentionally killed in the hail of Tommygun and shotgun fire.

This incident so outraged the American public that new Federal legislation was enacted the following year. Such crimes as bank robbery and extortion became Federal offenses and FBI Agents were authorized to carry firearms.

Erected 1991 by Society of Former Special Agents of the FBI.

Topics. This historical marker is listed in this

Photographed By Thomas Onions, June 13, 2009
2. In Memory of Law Enforcement Officers Killed in the "Kansas City Massacre" Marker
A "Kansas City Gangster" Tour was in progress with the tour guide dressed in a zoot suit. The group is standing around the marker.

Location. 39° 5.055′ N, 94° 35.09′ W. Marker is in Kansas City, Missouri, in Jackson County. Marker is on West Pershing Road. This marker is left of the right entrance to Union Station. Touch for map. Marker is at or near this postal address: 30 W Pershing Road, Kansas City MO 64108, United States of America. Touch for directions.