The Railroad and the City 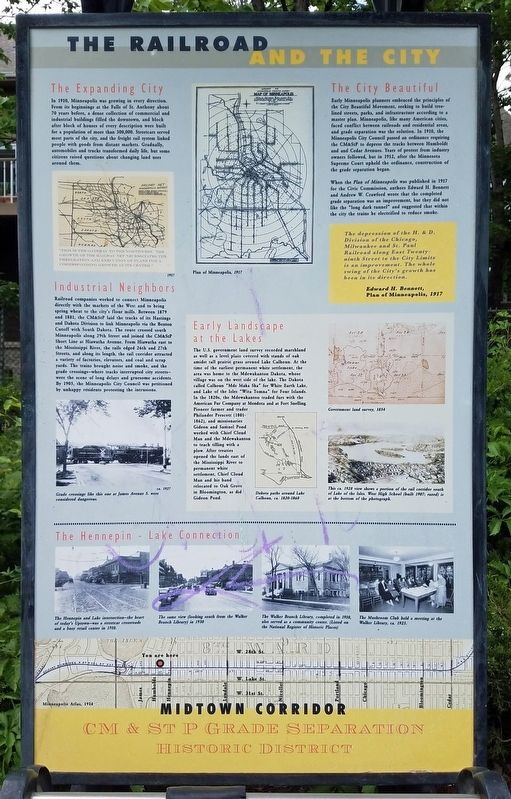 The Expanding City
In 1910, Minneapolis was growing in every direction. From its beginnings at the Falls of St. Anthony about 70 years before, a dense collection of commercial and industrial buildings filled the downtown, and block after block of houses of every description were built for a population of more than 300,000. Streetcars served most parts of the city, and the freight rail system linked people with goods from distant markets. Gradually, automobiles and trucks transformed daily life, but some citizens raised questions about changing land uses around them.

Industrial Neighbors
Railroad companies worked to connect Minneapolis directly with the markets of the West and to bring spring wheat to the city's flour mills. Between 1879 and 1881, the CM&StP laid the tracks of its Hastings and Dakota Division to link Minneapolis via the Benton Cutoff with South Dakota. The route crossed south Minneapolis along 29th Street and joined the CM&StP Short Line at Hiawatha Avenue. From Hiawatha east to the Mississippi River, the rails edged 26th and 27th Streets, and along its length, the rail corridor attracted 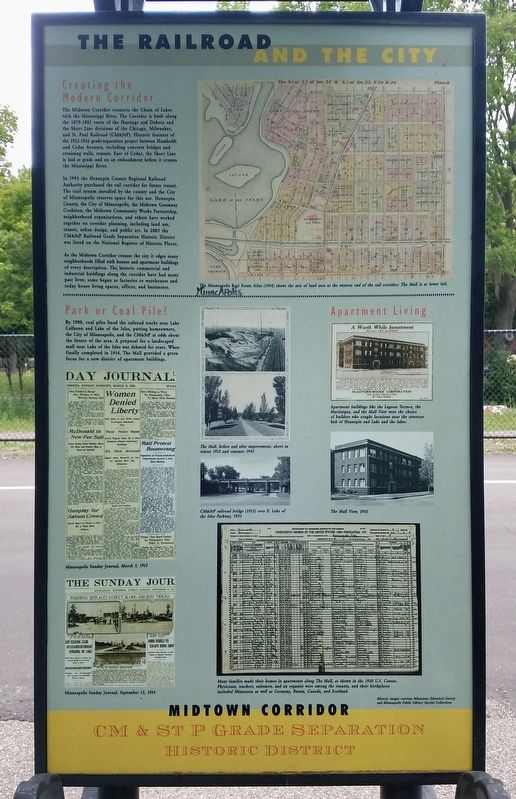 Photographed By McGhiever, June 10, 2022
2. The Railroad and the City Marker

Click or scan to see
this page online
a variety of factories, elevators, and coal and scrap yards. The trains brought noise and smoke, and the grade crossings—where tracks interrupted city streets—were the scene of long delays and gruesome accidents. By 1905, the Minneapolis City Council was petitioned by unhappy residents protesting the intrusions.

[Caption:] Grade crossings like this one at James Avenue S. were considered dangerous.

Early Landscape at the Lakes
The U.S. government land survey recorded marshland as well as a level plain covered with stands of oak amidst tall prairie grass around Lake Calhoun. At the time of the earliest permanent white settlement, the area was home to the Mdewakanton Dakota, whose village was on the west side of the lake. The Dakota called Calhoun "Mde Maka Ska" for White Earth Lake, and Lake of the Isles "Wita Tomna" for Four Islands. In the 1820s, the Mdewakanton traded furs with the American Fur Company at Mendota and at Fort Snelling. Pioneer farmer and trader Philander Prescott (1801-1862), and missionaries Gideon and Samuel Pond worked with Chief Cloud Man and the Mdewakanton to teach tilling with a plow. After treaties opened the lands east of the Mississippi River to permanent white settlement, Chief Cloud Man and his band relocated to Oak Grove in Bloomington, as did Gideon Pond. 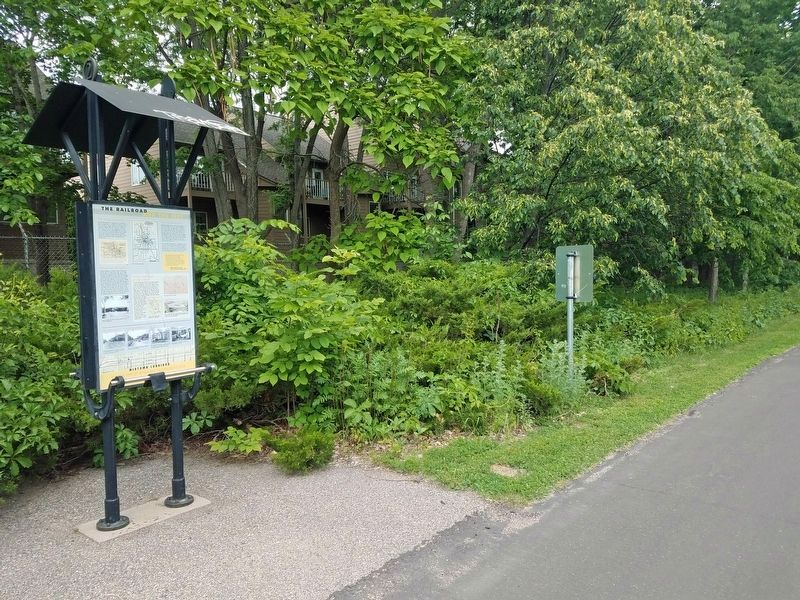 Photographed By McGhiever, June 10, 2022
3. The Railroad and the City Marker on the north side of the Midtown Greenway
paths around Lake Calhoun, ca. 1820-1860

The City Beautiful
Early Minneapolis planners embraced the principles of the City Beautiful Movement, seeking to build tree-lined streets, parks, and infrastructure according to a master plan. Minneapolis, like many American cities, faced conflict between railroads and residential areas, and grade separation was the solution. In 1910, the Minneapolis City Council passed an ordinance requiring the CM&StP to depress the tracks between Humboldt and Cedar Avenues. Years of protest from industry owners followed, but in 1912, after the Minnesota Supreme Court upheld the ordinance, construction of the grade separation began.

When the Plan of Minneapolis was published in 1917 for the Civic Commission, authors Edward H. Bennett and Andrew W. Crawford wrote that the completed grade separation was an improvement, but they did not like the "long dark tunnel" and suggested that within the city the trains be electrified to reduce smoke.

The depression of the H. & D. Division of the Chicago, Milwaukee and St. Paul Railroad along East Twenty-Ninth Street to the City Limits is an improvement. The whole swing of the City's growth has been in its direction.
Edward H. Bennett,
Plan of Minneapolis, 1917

This ca. 1928 view shows a portion of the rail corridor south of Lake of the Isles. West High School (built 1907; razed) is at the bottom of the photograph.

The Hennepin - Lake Connection
[Captions]
The Hennepin and Lake intersection—the heart of today's Uptown—was a streetcar crossroads and a busy retail center in 1910.

The Walker Branch Library, completed in 1910, also served as a community center. (Listed on the National Register of Historic Places)

The Mushroom Club held a meeting at the Walker Library, ca. 1925.

[Reverse]
Creating the Modern Corridor
The Midtown Corridor connects the Chain of Lakes with the Mississippi River. The Corridor is built along the 1879-1881 route of the Hastings and Dakota and the Short Line divisions of the Chicago, Milwaukee, and St. Paul Railroad (CM&StP). Historic features of the 1912-1916 grade-separation project between Humboldt and Cedar Avenues, including concrete bridges and retaining walls, remain. East of Cedar, the Short Line is laid at grade and on an embankment before it crosses the Mississippi River.

In 1993 the Hennepin County Regional Railroad Authority purchased the rail corridor for future transit. The trail system installed by the county and the City of Minneapolis reserves space for this use. Hennepin County, the City of Minneapolis, the Midtown Greenway Coalition, the Midtown Community Works Partnership, neighborhood organizations, and others have worked together on corridor planning, including land use, transit, urban design, and public art. In 2005 the CM&StP Railroad Grade Separation Historic District was listed on the National Register of Historic Places.

As the Midtown Corridor crosses the city it edges many neighborhoods filled with houses and apartment buildings of every description. The historic commercial and industrial buildings along the corridor have had many past lives; some began as factories or warehouses and today house living spaces, offices, and businesses.

[Caption:] The Minneapolis Real Estate Atlas (1914) shows the mix of land uses at the western end of the rail corridor; The Mall is at lower left.

Park or Coal Pile?
By 1900, coal piles lined the railroad tracks near Lake Calhoun and Lake of the Isles, putting homeowners, the City of Minneapolis, and the CM&StP at odds about the future of the area. A proposal for a landscaped mall near Lake of the Isles was debated for years. When finally completed in 1914, The Mall provided a green focus for a new district of apartment buildings.

[Captions:]
The Mall, before and after improvement, above in winter 1913 and summer 1945

Apartment buildings like the Lagoon Terrace, the Martinique, and the Mall View were the choice of builders who sought locations near the streetcar hub of Hennepin and Lake and the lakes.

Many families made their homes in apartments along The Mall, as shown in the 1920 U.S. Census. Physicians, teachers, salesmen, and an organist were among the tenants, and their birthplaces included Minnesota as well as Germany, Russia, Canada, and Scotland. (Marker Number 2.)

Topics. This historical marker is listed in these topic lists: Parks & Recreational Areas • Railroads & Streetcars. A significant historical year for this entry is 1912.