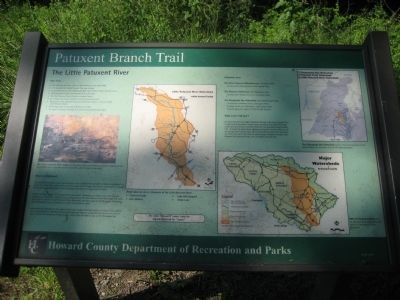 The Little Patuxent River today provides scenic views and recreation, as well as habitat for fish and wildlife. Once it provided power for sawmills, gristmills, and cotton mills.

What is a Watershed?

The total land area that catches rain and drains it to a specific body of water is called a watershed. it is similar to a basin that catches water, and then pours it into a larger basin. Each small stream or tributary 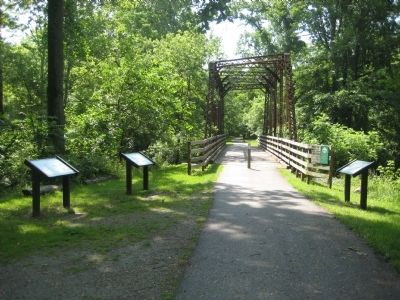 Click or scan to see
this page online
has its own watershed, which is part of a larger watershed of a bigger body of water.

Watersheds are important to the health of the body of water that they supply, and that, in turn, affects the total environment. Everything that contaminates water in a watershed can pollute the river or lake at the end of its journey. A drop of water falling here will find its way to the Chesapeake Bay.

These lakes are all on tributaries of the Little Patuxent River:
• Centennial Lake
• Lake Elkhorn
• Lake Kittimaqundi
• Wilde Lake

The name "Patuxent" comes from the Algonquian word for "rapids."

The Chesapeake Bay Watershed totals 64,000 square miles. It covers all of 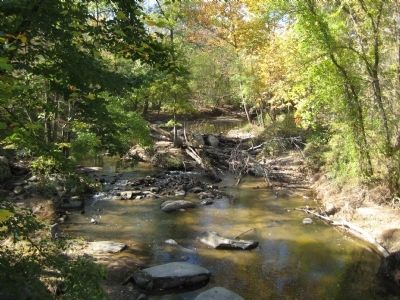 What is the "Fall Line"? As rivers flow from the higher Piedmont Plateau to the lower Coastal Plain in Maryland, their descent creates many waterfalls and rapids. This edge, which generally follows interstate Route 95, has long been called the Fall Line. It marks the point where upstream navigation becomes difficult and the energy of the falling water can be harnessed to power mills and factories. Often the water has carved a narrow gorge through the harder rocks. Between Guilford and Savage, the river drops nearly 60 feet.

The Chesapeake Bay Watershed covers 1.7% of the landmass of the United States, yet it contains 5.2% of the total population.

Topics. This historical marker is listed in these topic lists: Environment • Industry & Commerce • Waterways & Vessels. A significant historical year for this entry is 1972.

Location. 39° 9.945′ N, 76° 50.468′ W. Marker is in Columbia, Maryland, in Howard County. Marker can be reached from Old Guilford Road, 0 miles south of Guilford Road when traveling south. Marker is on the trail near the parking lot, on the north side of the restored bridge of the Little Patuxent River. Touch for map. Marker is in this post office area: Columbia MD 21046, United States of America. Touch for directions.