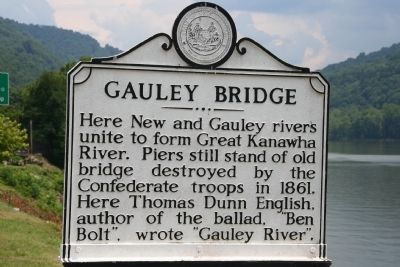 Topics and series. This historical marker is listed in these topic lists: Arts, Letters, Music • Bridges & Viaducts • War, US Civil. In addition, it is included in the West Virginia Archives and History series list. A significant historical year for this entry is 1861.

Location. 38° 9.744′ N, 81° 11.672′ W. Marker is in Gauley Bridge, West Virginia, in Fayette County. Marker is on U.S. 60, 0.1 miles east of West Virginia Route 16, on the right when traveling east. This historical marker is located along the north side of the New River, just east of where the Gauley River flows into the New River to form the Great Kanawha River. Touch for map. Marker is in this post office area: Gauley Bridge WV 25085, United States of America. Touch for directions.

Other nearby markers. At least 8 other markers are within 5 miles of this marker, measured as the crow flies. Battles For The Bridges (within shouting distance of this marker); Gauley Bridge War Memorial (approx. 0.2 miles away); Camp Reynolds (approx. 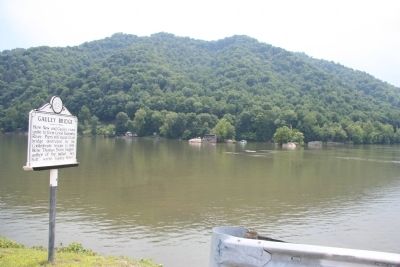 Photographed By Dale K. Benington, July 9, 2009
2. Gauley Bridge Marker
View of the historical marker in the left foreground and a view looking across the New River at the old bridge piers from the bridge destroyed by the Confederates. 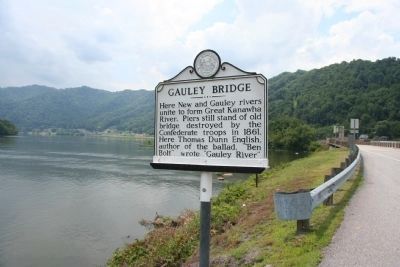 Photographed By Dale K. Benington, July 9, 2009
3. Gauley Bridge Marker
View of the historical marker in the foreground with a view to the right of the bridge over the Gauley River and a view of where the New and Gauley Rivers unite to form the Great Kanawha River. 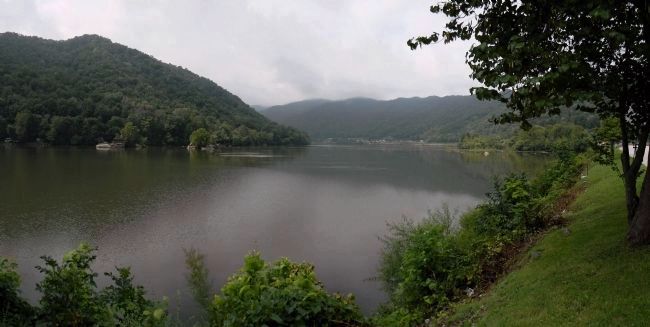