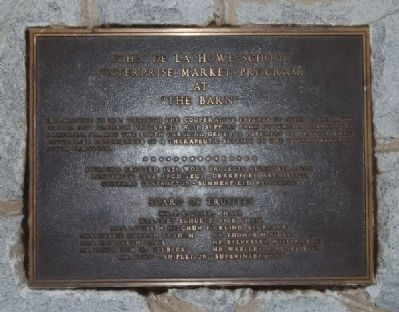 Topics and series. This historical marker is listed in these topic lists: Agriculture • Education • Notable Buildings. In addition, it is included in the Works Progress Administration (WPA) projects series list. A significant historical year for this entry is 1987. 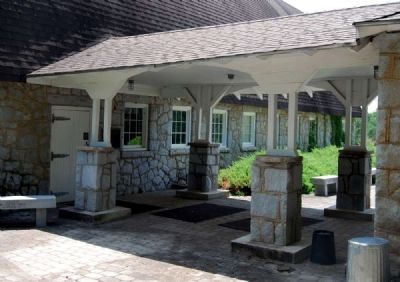 Click or scan to see
this page online
33° 57.283′ N, 82° 25.45′ W. Marker is in Bordeaux, South Carolina, in McCormick County. Marker can be reached from Gettys Road (State Highway 81). Marker is located to the right of the north entrance to the Barn. Touch for map. Marker is at or near this postal address: 192 Gettys Road, Mc Cormick SC 29835, United States of America. Touch for directions.

Also see . . .
1. John De La Howe School. Originally founded in 1797 as a farm school for local poor and orphaned children, John de la Howe School has evolved into a first-rate, child caring agency committed to meeting the behavioral, educational, and social needs of the children in its care. (Submitted on July 17, 2009, by Brian Scott of Anderson, South Carolina.) 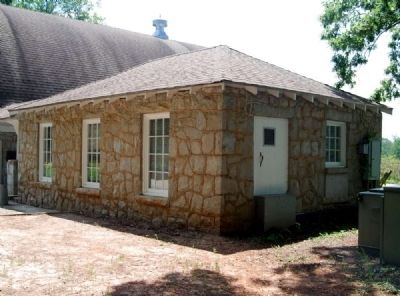 What to Look for: The 1.5-mile trail crosses dry upland hardwood forest, mixed pine/hardwood forest, and some floodplain forest. It overlooks both a two-acre beaver pond and part of the headwaters of Lake Thurmond. Rock outcrops encrusted with lichens are common and add to the beauty of the walk. This is a great place to look for turtles, lizards, 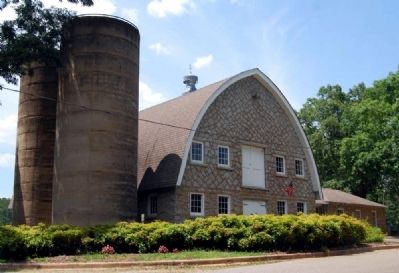 Photographed By Brian Scott, July 4, 2009
4. John De La Howe Barn and Silos - Front (East) Side
toads and other reptiles and amphibians. Birders will appreciate the presence of eastern wood pewees, red-eyed vireos, wood thrushes, and hooded, yellow, and black-and-white warblers. Near the water, look for great blue herons, egrets, wood ducks and Canada geese. Eagles sometimes pass overhead, as do red-tailed hawks. Listen for quail and turkeys, and the occasional startled deer bounding out of your path. Wildflower enthusiasts should plan a spring trip to see faded trilliums in bloom.

When to Go: The trail is always open, but if you visit on Saturday, you can also visit "The Barn" where volunteers sell student-made crafts and community consignment items. Restrooms and drinking water are only available in The Barn.

How to Get There: From McCormick, go north on SC 28 and follow it for approximately 8 miles. Just after the road crosses the Long Cane Bridge, bear left on SC 81. Watch for the Barn about 3 miles father on the right, shortly after the main entrance (on the left) to the John de la Howe School. The train begins at the far side of the field, on the right as you face the Barn. 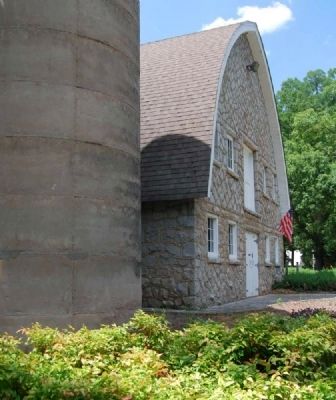 Photographed By Brian Scott, July 4, 2009
5. John De La Howe Barn and Silos - Front (East) Side
— Submitted July 18, 2009, by Brian Scott of Anderson, South Carolina.
2. The De La Howe Gift
Dr. John De La Howe, of Abbeville District, on the 7th day of September, 1796, made his last will and testament and thereby gave all of his estate, consisting of both personal and real, to the Agricultural Society of South Carolina, in trust, for the purpose of establishing on the plantation where he resided an agricultural farm and school, out of the yearly income, to feed, clothe and educate twelve poor boys and twelve poor girls, giving orphan children the preference. The testator requested Peter Gibert. Esq., to act as executor of the will until the Agricultural Society should name some of its members to perform that duty. By a codicil, without date, he appointed William Hutton a joint executor with Mr. Gibert. Dr. De La Howe died on the 2d day of January, 1797, and his will was admitted to probate on the 27th of March, 1797, by the County Court of Abbeville. An appraisement was made on the 5th of April, 1797. The appraised value of the personal property at that time amounted to $5,438.68.

In 1805 the Agricultural Society surrendered their trust to the Legislature, who accepted it, and by Act passed on the I4th of December, same year, appointed Col. Joseph Calhoun, Peter Gibert, Andrew Norris, Rev. Moses 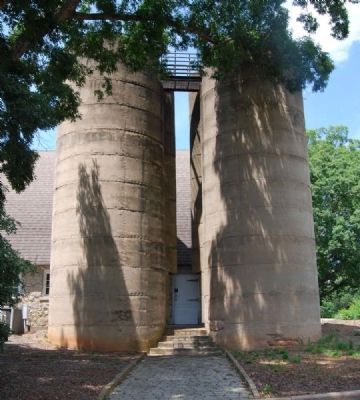 Photographed By Brian Scott, July 4, 2009
6. John De La Howe Silos
Waddel, Ezekiel Calhoun, trustees, to carry into effect the terms of the will, conferring on them the power to fill their own vacancies, and directed them to account annually to the Ordinary of Abbeville District.

The real estate consisted of quite a number of tracts of land situated in the Districts of Abbeville, Edgefield, and on the Edisto River. A certain part of the land was sold about this time, which produced a sum—added to the amount realized from sale of personal property—aggregating some $32,237.

The institution has had a changing experience since the above date. Today the institution is in possession of 2,700 acres of land, valued at $54,000, besides having $14,000 invested in good bonds. There is erected on the premises one brick building containing twelve rooms for the use of Superintendent and girls, and one four-room brick building for the boys, a commodious chapel in which preaching is held regularly—preacher paid by the trustees. The annual income of the farm is $3.500; expenses for maintaining school, Superintendent, etc., are $2,000.

In view of the above facts, it is strange to state 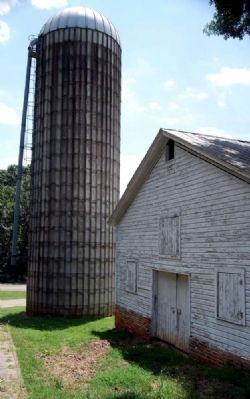 Photographed By Brian Scott, July 4, 2009
7. Side Barn and Silo
that the trustees find great difficulty in procuring as many children as the school can accommodate. Notwithstanding the fact, the trustees are now begging for children from adjoining counties, offering to pay their transportation from and to the institution, educate, feed, clothe and pay their medical expenses. I must admit I am unable to explain this state of circumstances.

Dr. De La Howe was buried on the hill opposite to the dwelling on the plantation named by him "Lethe Farm." He requested a substantial brick wall should be built around his grave—not less than ten feet square, eight feet above the ground, with an iron door and lock, and that the following inscription, in large iron capitals, shall ever be kept encased: "Joes De La Howe, fundator, hipes Seminarie Agriculturalis," with date of his decease. (Source: Handbook of South Carolina by the South Carolina Dept. of Agriculture, pg 215.)
— Submitted July 18, 2009, by Brian Scott of Anderson, South Carolina.
3. Description of the De La Howe School
The American Farmer
1831

We have no information of the character of the deceased, nor of his wealth or will, but what is contained in an advertisement which we find in a South Carolina paper. By this advertisement it appears that provision 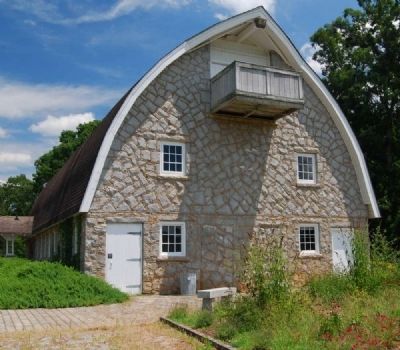 Photographed By Brian Scott, July 4, 2009
8. John De La Howe Barn - Rear (West) Side
is made in the will of the late John De La Howe for the education of twenty-four poor children, twelve boys and twelve girls. The trustees appointed to carry the will into effect, advertise for a teacher to superintend a farm school as planned and provided for in the will of the deceased. They have provided a good farm, suitable buildings, utensils, provisions and necessary stock, and offer a liberal salary for a teacher. According to the plan of the school in the will, the children will live together in one family, and the expenses are to be defrayed out of the funds of the estate with the addition of the labor of the children on the farm.
— Submitted December 18, 2009, by Brian Scott of Anderson, South Carolina.
Credits. This page was last revised on June 16, 2016. It was originally submitted on July 17, 2009, by Brian Scott of Anderson, South Carolina. This page has been viewed 1,793 times since then. Photos:   1, 2, 3, 4, 5, 6, 7, 8. submitted on July 18, 2009, by Brian Scott of Anderson, South Carolina.
Share this page.