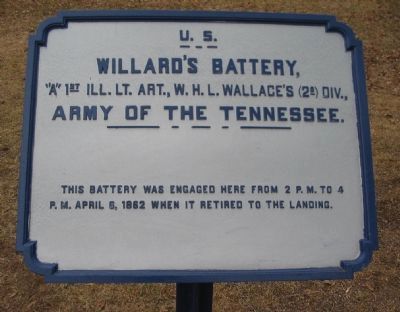 By Craig Swain, March 16, 2009
1. Willard's Battery Tablet
The battery was commanded by Lieutenant Peter P. Wood at the battle.
Inscription.
Willard's Battery. "A" 1st Illinois Light Artillery - W.H.L. Wallace's Division.
U.S. Willard's Battery, "A" 1st Ill. Lt. Art., W.H.L. Wallace's (2d) Div., Army of the Tennessee.. This battery was engaged here from 2 p.m. to 4 p.m. April 6, 1862 when it retired to the landing. . This historical marker was erected by Shiloh National Military Park Commission. It is Near Shiloh in Hardin County Tennessee

Topics. This historical marker is listed in this topic list: War, US Civil. A significant historical month for this entry is April 2003.

Location. 35° 8.039′ N, 88° 19.904′ W. Marker is near Shiloh, Tennessee, in Hardin County. Marker is on Hamburg-Savannah Road, on the left when traveling north. Located at stop 14, the bloody pond, of the driving tour of Shiloh National Military Park. Touch for map. Marker is in this post office area: Shiloh TN 38376, United States of America. Touch for directions. 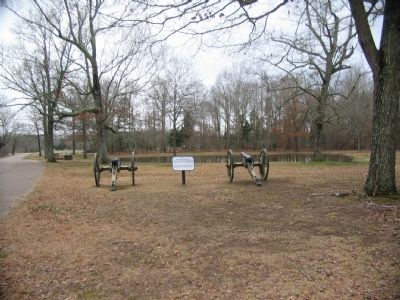 By Craig Swain, March 16, 2009
2. Willard's Battery Position
The battery is represented by two, and the only two at Shiloh, 3-inch Ordnance Rifles. 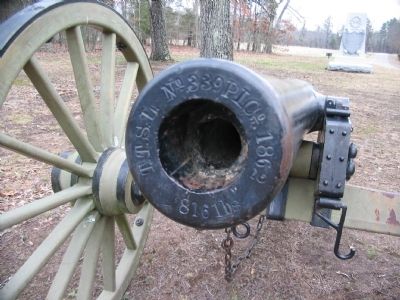 By Craig Swain, March 16, 2009
3. Muzzle of 3-inch Rifle
The muzzle of this piece displays the standard markings for an 3-inch Ordnance Rifle, similar to those used on regulation artillery pieces after 1861. The markings indicate the weapon was cast in 1862, by Pheonix Iron Works of Pennsylvania. It is registry number 339, weighing 816 pounds, and inspected by Theodore T.S. Laidley. The registry number matches records of a gun captured by General Custer's cavalry in the Shenandoah Valley in November 1864. So these artillery pieces did move around somewhat after the war.
Credits. This page was last revised on June 16, 2016. It was originally submitted on August 1, 2009, by Craig Swain of Leesburg, Virginia. This page has been viewed 831 times since then and 10 times this year. Photos:   1, 2, 3. submitted on August 1, 2009, by Craig Swain of Leesburg, Virginia.
Share This Page.