A tribute to those patriots who sleep in Southern graves uncoffined, unshrouded and unknown.

Location. 38° 30.25′ N, 95° 42.43′ W. Marker is in Melvern, Kansas, in Osage County. Memorial is on NW Emporia Street 0.2 miles east of South California Road, on the left when traveling west. Touch for map. Marker is in this post office area: Melvern KS 66510, United States of America. Touch for directions.

More about this marker. This marker is in the middle of the Melvern Cemetery which is west of the town of Melvern Ks. The same inscription is on both the west and south sides of the marker - no other inscriptions on the marker. 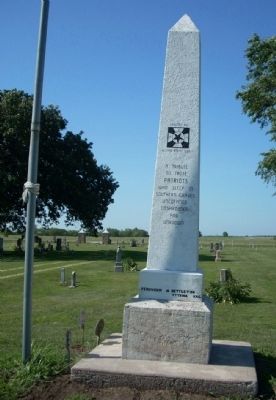 By Thomas Onions, August 2, 2009
2. Melvern Civil War Tribute Marker
This photo is of the inscription on the south side of the tribute.
. This link is to the National Woman's Relief Corps which continues from the original organization. (Submitted on August 8, 2009, by Thomas Onions of Olathe, Kansas.) 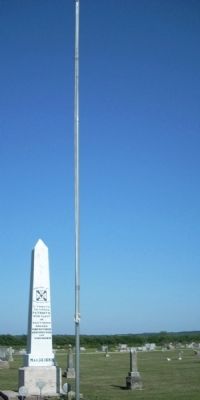