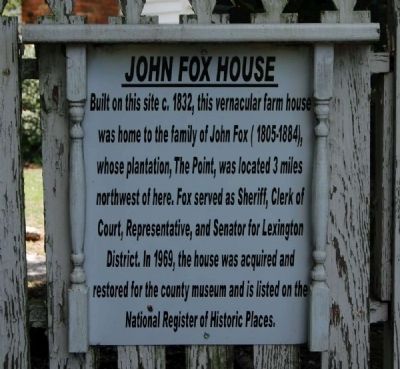 By Brian Scott, August 22, 2009
1. John Fox House Marker
Inscription.
John Fox House. . Built on this site c. 1832, this vernacular farm house was home to the family of John Fox (1805-1884), whose plantation, The Point, was located 3 miles northwest of here. Fox served as Sheriff, Clerk of Court, Representative, and Senator for Lexington District. In 1969, the house was acquired and restored for the county museum and is listed on the National Register of Historic Places. . This historical marker is in Lexington in Lexington County South Carolina

Built on this site c. 1832, this vernacular farm house was home to the family of John Fox (1805-1884), whose plantation, The Point, was located 3 miles northwest of here. Fox served as Sheriff, Clerk of Court, Representative, and Senator for Lexington District. In 1969, the house was acquired and restored for the county museum and is listed on the National Register of Historic Places.

Topics. This historical marker is listed in these topic lists: Agriculture • Architecture • Law Enforcement. A significant historical year for this entry is 1832. 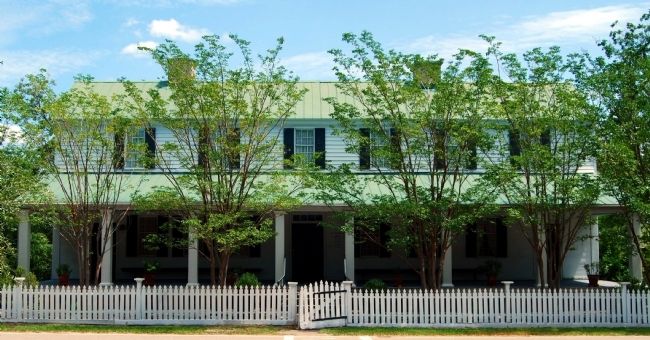 Click or scan to see
this page online
Post Office (within shouting distance of this marker); Hazelius House (within shouting distance of this marker); Oak Grove Schoolhouse (about 300 feet away, measured in a direct line); Daniel Koon House (about 300 feet away); Laurence Corley House (about 400 feet away); Tomb of Dr. E.L. Hazelius (approx. 0.3 miles away); St. Stephen's Church (approx. 0.3 miles away). Touch for a list and map of all markers in Lexington.

The building is 2-story frame, about 64-feet long and 28-feet wide with an 11-foot wide porch across the front. Shed rooms are across the back. Two 16-by-20-foot dependencies, a kitchen and a housekeepers quarters, are attached 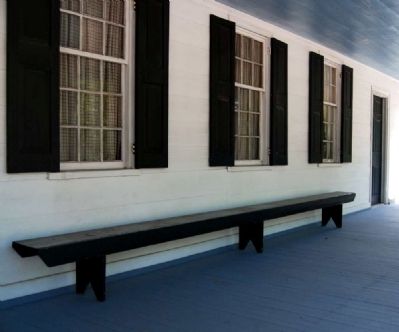 By Brian Scott
3. John Fox House - Front Porch
to the rear by open breezeways. The house is covered with six-inch clapboards,painted white. Shutters and doors are green. The small windows are 15-paned throughout. The doors are six-paneled. Three doors open on to the front porch and one to each breezeway.

There are four upstairs rooms of varying sizes and a hall. A similar pattern is followed in the downstairs front rooms. One of these extends the full depth of the house. This room, thought to have been the Seminary library, adjoins a long room at the rear which probably served as the dining hall. The house has two chimneys, each with four fireplaces. Each of the two dependencies has its own end chimney, that of the kitchen very large. Seven of the eight mantels are original. All doors and windows are original

Although the house has suffered several alterations, the following changes are being made to return its original appearance: removal of an end porch and two bathroom additions as well as interior sheetrock partition to re-establish the original floor plan; repair and re-plastering of fireplaces and hearths; replacement of damaged and un-original segments of wide plank flooring; removal of paint upstairs to expose original plank walls of pine. Also, leveling of the house·and reconstruction of old kitchen building with large end-cooking fireplace; replacement of broken and new window panes with original 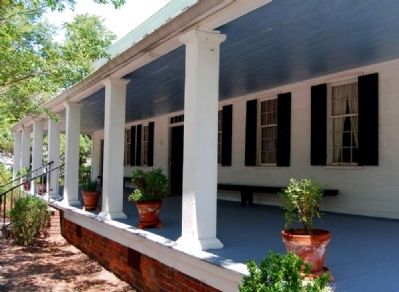 Erection of a picket fence and duplication of original porch banisters are planned. Except in cases where materials were unavailable or impractical for modern usage, building materials in the restoration have been taken from Lexington county houses of the same vintage. Modern innovations include natural gas heating and air conditioning, electrical wiring and burglar alarm systems. A roof of wooden shingles will replace the present tin one.

Development of a historical garden of 19th century shrubs, plants and trees, and appropriate landscaping of the surrounding three acres is under direction of a landscape architect.

Long-range plans call for such farm outbuildings as a thresher house, a log barn, smoke house, cotton gin, and an academy/school building.

Significance
Architecturally, the house has been rated notable and classified of value to city and state, "an honest statement of the quality of an early carpenter design and a typical expression of the thrift and frugality of the early German/Swiss settlers of the area...a simple rectangular structure of two full floors, weather-board exterior, double-hung windows, 6 over 9, much original 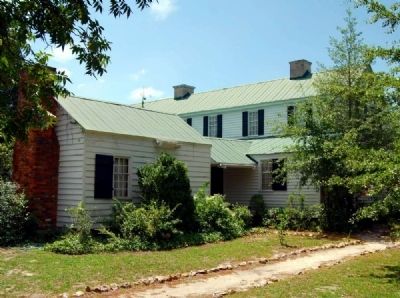 Historic value of the Fox House is mainly the fact that it was built for and housed, from 1832/33 to 1855, the newly founded Southern Lutheran Seminary, second oldest organized Lutheran theological school in the United States.

The Lutheran Seminary started in 1830 when five young men journeyed to the home of Colonel John Eigleberger (Eichelberger) near Pomaria, South Carolina, for instruction in theology from the Rev. John G. Schwartz. This being unsatisfactory to the Synod, a search was begun for a new site. The offer from the new town of Lexington -- the sum of $5,287 and property -- as accepted in 1832. This house, then one-half mile from town, was erected as a faculty-dormitory with some classes to be taught therein. To serve as Professor of theology, the Rev. Ernest L. Hazelius, D.D., was chosen by Synod President Dr. John Bachman. Dr. Hazelius was then professor of Gettysburg Theological Seminary. His worth and attainments were recognized when he was elevated to the presidency of the General Synod of the United States. Dr. Hazelius died in 1853 at the age of 76 and is buried in St. Stephen's churchyard in Lexington. In 1855, the seminary was moved to Newberry, S.C. In 1858, the house was purchased by John Fox of Lexington (1805-1884), county sheriff, clerk of court, state senator.