History of the Ten Commandments Monolith 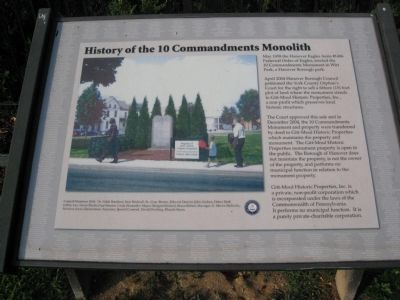 By Henry T. McLin, July 31, 2009
1. History of the Ten Commandments Monolith Marker
Inscription.
History of the Ten Commandments Monolith. . May 1958 the Hanover Eagles Aerie #1406 Fraternal Order of Eagles erected the 10 Commandments Monument in Wirt Park, a Hanover Borough Park. . . April 2004 Hanover Borough Council Petitioned the York County Orphan's Court for the right to sell the fifteen (15) foot plot of land where the monument stands of Gitt-Moul Historic Properties, Inc., a non-profit which preserves local historic structures. . . The Court approved the sale and in December 2004, the 10 Commandments Monument and property transferred by deed to Gitt-Moul Historic Properties which maintains the property and monument. The Gitt-Moul Historic Properties monument property is open to the public. The Borough of Hanover does not maintain the property, is not the owner of the property, and performs no municipal function in relation to the monument property. . This historical marker was erected in 2004. It is in Hanover in York County Pennsylvania

May 1958 the Hanover Eagles Aerie #1406 Fraternal Order of Eagles erected the 10 Commandments Monument in Wirt Park, a Hanover Borough Park. 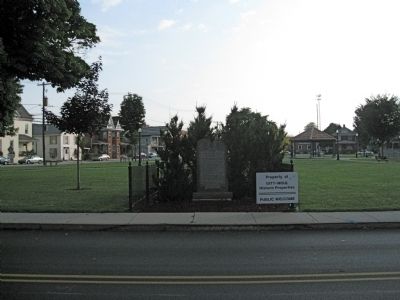 By Henry T. McLin, July 31, 2009
2. History of the Ten Commandments Monolith Marker
Hight St. in foreground. Marker is behind the evergreen trees and is not visible. The 10 Commandments Monument is on private property surrounded by Wirt Park owned by the Borough of Hanover.
N, 76° 59.25′ W. Marker is in Hanover, Pennsylvania, in York County. Marker is on High Street (Pennsylvania Route 116). Touch for map. Marker is at or near this postal address: 133 High Street, Hanover PA 17331, United States of America. Touch for directions. 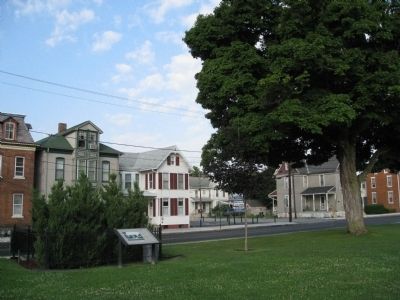 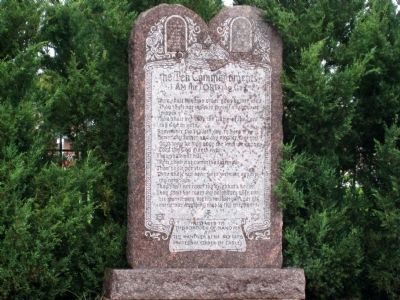