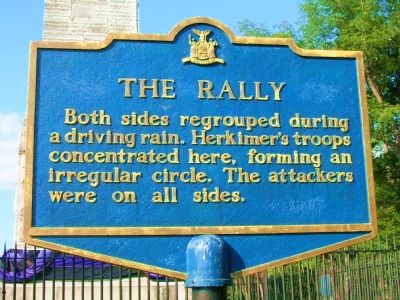 Photographed By Howard C. Ohlhous, August 17, 2008
1. The Rally Marker
Oriskany Battlefield State Historic Site, Oriskany, New York
Inscription.
The Rally. . , Both sides regrouped during a driving rain. Herkimers's troops concentrated here, forming an irregular circle. The attackers were on all sides. . This historical marker was erected by State of New York. It is Near Oriskany in Oneida County New York

Both sides regrouped during a driving rain. Herkimers's troops concentrated here, forming an irregular circle. The attackers were on all sides.

Location. 43° 10.642′ N, 75° 22.166′ W. Marker is near Oriskany, New York, in Oneida County. Marker can be reached from Memorial Drive (New York State Route 69). The Rally marker is in Oriskany Battlefield State Historic Site which is located at 7801 New York State Route 69. Memorial Drive is essentially the driveway into the State Historic Site from Route 69. The marker is located on the northeast side of the tall stone Oriskany Battlefield Monument. Touch for map. Marker is at or near this postal address: 7801 State Route 69, Oriskany NY 13424, United States of America. Touch for directions. 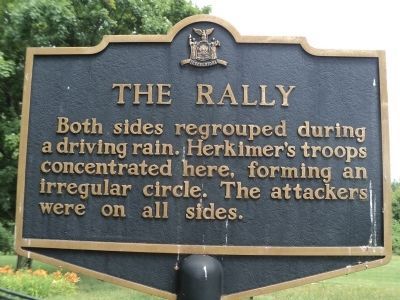 Regarding The Rally.
The Battle of Oriskany
Considered to be a significant turning point in the War of Independence, the Battle of Oriskany, fought on August 6, 1777, has been described as one of the bloodiest battles of the war. A monument was dedicated on August 6, 1884, to serve as a memorial to those who fought so bravely and tenaciously to preserve freedom. Oriskany Battlefied was designated a New York State historic site in 1927. In recognition of the site's exceptional historic value, the battlefield was designated a National Historic Landmark in 1963. Today, visitors to the battlefield can walk the site, read a series of interpretive signs, and visit a historic encampment during special 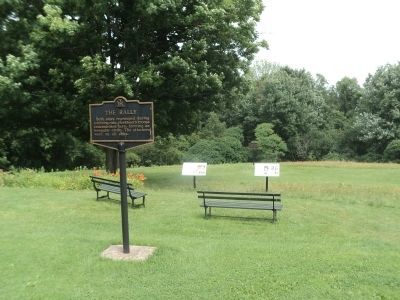 Photographed By Bill Coughlin, July 30, 2014
3. The Rally Marker on the Oriskany Battlefield
events. In August 1777, while the British were attacking Fort Stanwix, Brigadier General Nicholas Herkimer assembled 800 militiamen, supported by 60 allied Oneida warriors, and marched from Fort Dayton to aid against the siege. Upon hearing of Herkimer's advance, British and Loyalist troops under Sir John Johnson and Col. John Butler, and Indian forces led by Mohawk Joseph Brant, set a trap in a boggy ravine west of Oriskany Creek. As the unsuspecting American troops crossed the swampy bottom and marched up the ravine, the British attacked. The patriots fought in brutal hand-to-hand combat, and in spite of heavy losses, caused the Seneca and the Mohawks, followed by the British and Loyalists to retreat. It was in this battle that General Herkimer received the wound to his leg which led to his death ten days later. 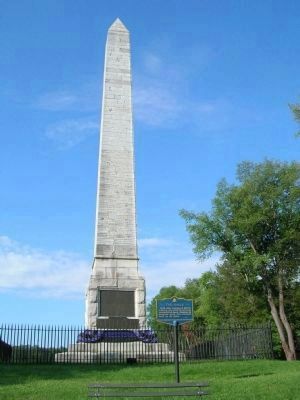 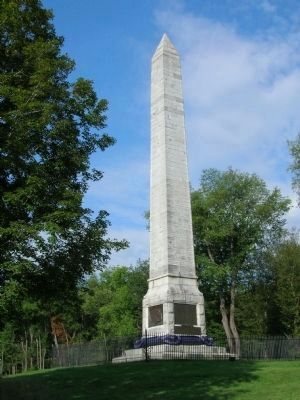 Photographed By Howard C. Ohlhous, August 17, 2008
5.
The Oriskany Battle Monument
On August 6, 1877, the centennial commemorating the Battle of Oriskany was celebrated. Ex-Governor Horatio Seymore was the main speaker. At sunrise, salutes fired from the guns on the battlefield announced a glorious day. Every home in the village of Oriskany was decorated, and 70,000 people came to the celebration on foot, by wagon, horseback, carriage, boat and by rail. It was a day to remember!

Commissioned in 1882, and dedicated in 1884, the monument was erected by the residents of the Mohawk Valley under the auspices of the Oneida Historical Society, the State of New York and the federal government. The limestone for the main shaft of the obelisk was dismantled from the Erie Canal weighlock in Utica. 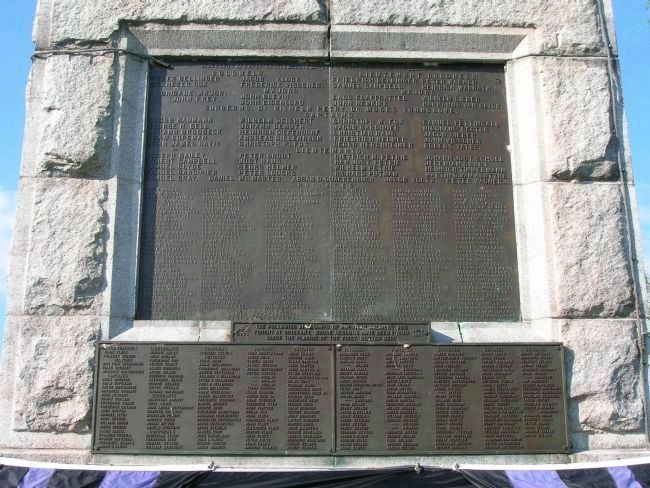