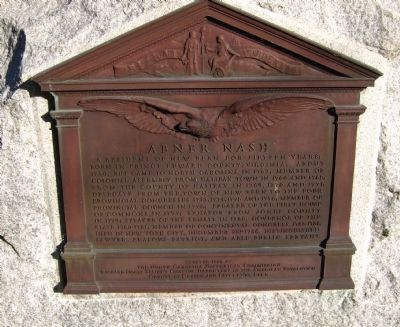 Photographed By Kevin W., October 21, 2009
1. Abner Nash Marker
Inscription.
Abner Nash. . A resident of New Bern for fifteen years; born in Prince Edward County, Virginia, about 1740, but came to North Carolina in 1763; member of Colonial Assembly from Halifax Town in 1764 and 1765; from the County of Halifax in 1769, 1770 and 1771; Delegate from the Town of New Bern to the four Provincial Congresses 1773, 1774, 1775 and 1776; member of Provincial Council in 1775; Speaker of the first House of Commons in 1777; Senator from Jones County in 1779; Speaker of the Senate in 1780; Governor of the State 1780-1781; member of Continental Congress 1782-1786. Died in New York City, December 2nd 1786. Distinguished lawyer, zealous patriot, and able public servant. . This historical marker was erected in 1923 by the North Carolina Historical Commission, Richard Dobbs Spaight Chapter, Daughters of the American Revolution, County of Craven and City of New Bern. It is in New Bern in Craven County North Carolina

Topics and series. This historical marker is listed in these topic lists: Colonial Era • Patriots & Patriotism • Settlements & Settlers. In addition, it is included in the Daughters of the American Revolution (DAR) series list. A significant historical month for this entry is December 1835. 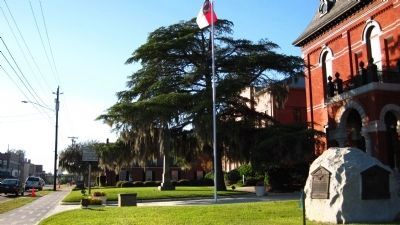 Photographed By Kevin W., October 21, 2009
2. Abner Nash Marker
The Nash Marker is on the opposite side of this boulder, which is located on the grounds of the Craven County Courthouse.