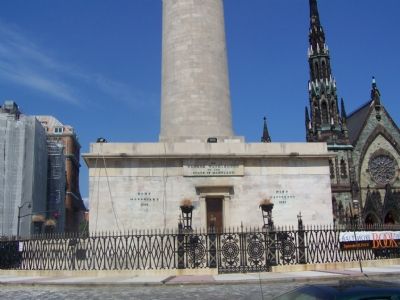 To George Washington by the State of Maryland. Commander in Chief of the American Army, 15 June 1775. Commission resigned at Annapolis, 23 December 1783.

To George Washington by the State of Maryland. President of the United States, 4 March 1789. Retired to Mount Vernon, 4 March 1797.

Erected 1815 by State of Maryland. 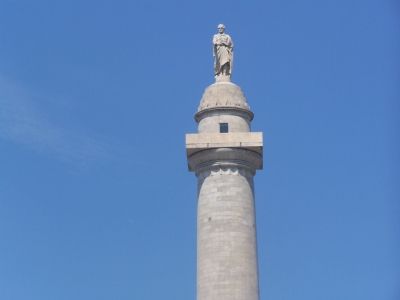 More about this marker. The marble statue of Washington on this 188 foot monument is 16 feet high and was carved by Enrico Causici, depicting General Washington as he resigned his commission in Annapolis after the Revolutionary War in 1782. The monument was designed by the architect Robert Mills. Cornerstone was laid July 4, 1815 and the sculpture installed November 25, 1829. 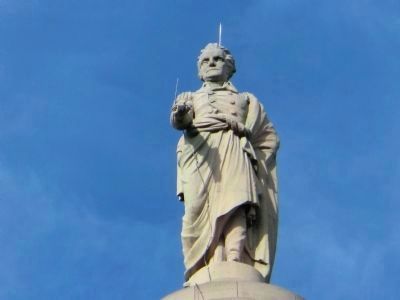 By Don Morfe, January 5, 2013
3. To George Washington Marker
Statue at the top of the monument-close up 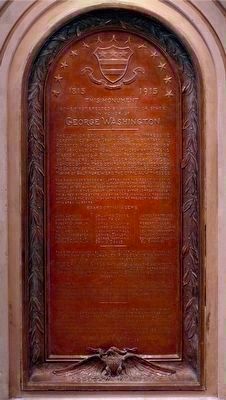 By Allen C. Browne, September 5, 2015
4. 1915 Centenary Plaque
Inside the Monument
1815 - 1915
This Monument
Is the first erected by any city or state
In Honor Of
George Washington
────•────
The corner-stone was laid with impressive ceremonies by the Grand Lodge Ancient Free and Accepted Masons. Hon. Levin Winder, Governor of Maryland acting as Most Worshipful Grand Master. James A.Buchanan, President of Board of Managers, Col. John Eager Howard and Gen. Samuel Smith, President and Vice-President of the Society of the Cincinnati and Edward Johnson, Mayor of Baltimore, were the official witnesses.

The raising of $100,000 by lottery for the erection of the monument was specifically authorized by the Maryland Legislature of 1810. But the cost of the Monument more than doubled that sum, and the amount not raised by the lottery was contributed by the State and by private individuals. The same act place the execution of the entire project in the hands of a special board.
Board of Managers
John Conegys, Dr. James Cooke, James Partridge, James A. Buchanan, John Frick, Nickolas G. Ridgely, Robert Gilmor, Jr., James Williams, Robert Miller, Isaac McKim, James Barroll, Nathaniel F. Williams, William H. Winder, Washington Hall, Levi Hollingsworth, David Winchester, Lemuel Taylor, William Gwynn, Fielding Lucas, Jr., George Hoffman, Benjamin H. Mullikin, James Calhoun, Jr., Edw. J. Coale, Eli Simkins
────
This site was donated by Col. John Eager Howard. The marble for the base by Gen. Charles Ridgely of Hampton. The monument was completed in 1829.
Robert Mills of South Carolina was the architect. His design of he statue executed by Causici, represents General Washington resigning his commission as Commander in Chief to Congress in Annapolis.

“Resign with satisfaction the appointment I accepted with diffidence — a diffidence in my abilities to accomplish so arduous a task, which, however was superseded by a confidence in the rectitude of our cause. The support of the supreme power of the union and the patronage of Heaven.” George Washington

This tablet was here placed July 4, 1915, in commemoration of the centenary of the laying of the cornerstone. The Grand Lodge of Maryland, Ancient Free and Accepted Masons, Gen. Thomas J.Shryock. M.W.G.M. and the leading patriotic societies of City and State participated in the attendant ceremonies. The official record of which will be found in the City Council Journal for the year 1915. 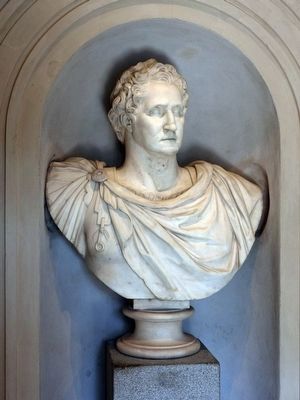 By Allen C. Browne, September 5, 2015
5. Bust of George Washington
Inside the Monument 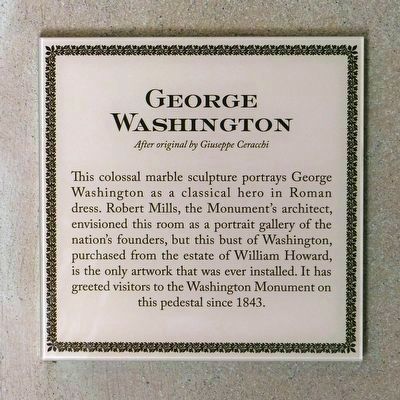 By Allen C. Browne, September 5, 2015
6. George Washington
After orginial by Giuseppe Ceracchi
This colossal marble sculpture portrays George Washington as a classical hero in Roman dress. Robert Mills, the Monument's architect, envisioned this room as a portrait gallery of the nation's founders, but this bust of Washington, purchased from the estate of William Howard, is the only artwork that was ever installed. It has greeted visitors to the Washington Monument on this pedestal since 1843. 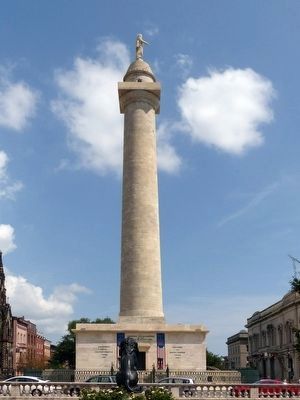 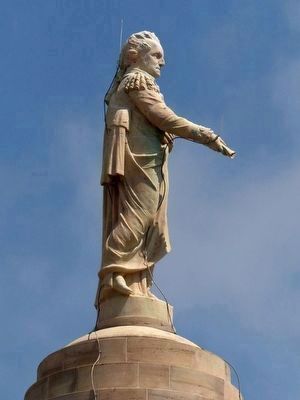 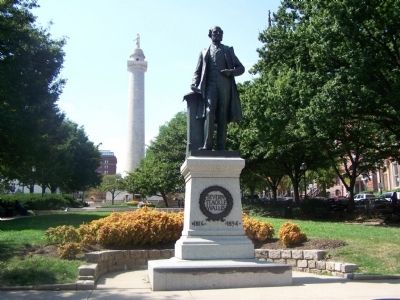 By William Pfingsten, September 9, 2007
9. Washington Monument looking west on Monument Street
The 1906 Severn Teackle Wallis Monument in foreground. The bronze of the prominent Baltimore lawyer, poet, author and orator is by the French sculptor Laurent Honore Marqueste (1848-1920) and is 7¾ feet high on a 6½ foot base. Mr. Wallis was born in 1816 and died in 1894.
More. Search the internet for To George Washington.