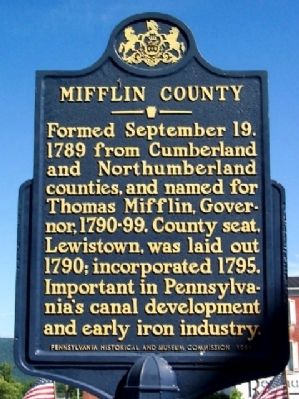 By William Fischer, Jr., July 5, 2009
1. Mifflin County Marker
Inscription.
Mifflin County. . . Formed September 19, 1789 from Cumberland and Northumberland counties, and named for Thomas Mifflin, Governor, 1790-99. County seat, Lewistown, was laid out 1790; incorporated 1795. Important in Pennsylvania's canal development and early iron industry. . This historical marker was erected in 1981 by Pennsylvania Historical and Museum Commission. It is in Lewistown in Mifflin County Pennsylvania

Topics and series. This historical marker is listed in these topic lists: Government & Politics • Industry & Commerce • Political Subdivisions • Settlements & Settlers • Waterways & Vessels. In addition, it is included in the Pennsylvania Historical and Museum Commission series list. A significant historical date for this entry is September 19, 1909.

Location. 40° 35.855′ N, 77° 34.49′ W. Marker is in Lewistown, Pennsylvania, in Mifflin County. Marker is at the intersection of Market Street and Main Street, on the right when traveling west on Market Street. Marker stands in front of the old county courthouse. Touch for map. Marker is in this post office area: Lewistown PA 17044, United States of America. Touch for directions.

Other nearby markers. At least 8 other markers are within walking distance of this marker. Historic Courthouse (here, next to this marker); Montgomery Ward Building 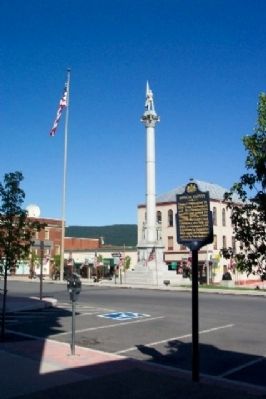