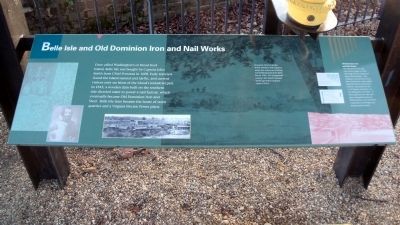 Once called Washington’s or Broad Rock Island, Belle Isle was bought by Captain John Smith from Chief Powatan in 1608. Early travelers found the island natural and idyllic and current visitors only see hints of the island’s industrial past. In 1815, a wooden dam built on the southern side diverted water to power a nail factory, which eventually became Old Dominion Iron and Steel. Belle Isle later became the home of stone quarries and a Virginia Electric Power plant.

Topics. This historical marker is listed in these topic lists: Industry & Commerce • War, US Civil. A significant historical year for this entry is 1608. 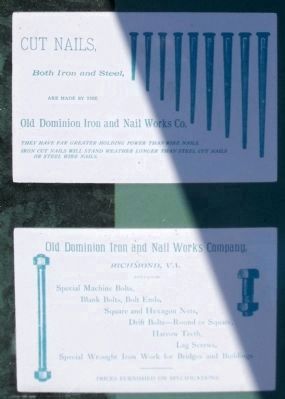 Click or scan to see
this page online
W. Marker is in Richmond, Virginia. Marker can be reached from Tredegar Street, 0.1 miles west of South 5th Street. This marker is located outside the Civil War Visitor Center at Tredegar Iron Works. Touch for map. Marker is at or near this postal address: 470 Tredegar Street, Richmond VA 23219, United States of America. Touch for directions.

More about this marker. On the upper left are images of Captain John Smith and Chief Powhatan. On the lower left is a photograph of Old Dominion Nails & Iron.

On the right is a watercolor of Belle Isle with the caption, "Benjamin Henry Latrobe, noted architect and engineer, made this watercolor looking toward Richmond from Belle Isle in 1796. The foreground conveys the island’s natural landscape before industry came in 1815."

On the lower right is a drawing of the covered railroad bridge to Belle Isle. 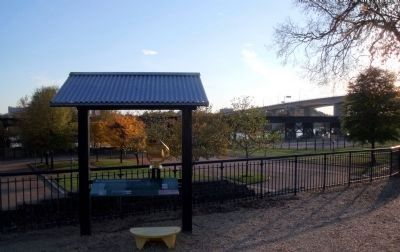 Photographed By Bernard Fisher, November 3, 2009
4. Belle Isle can be seen in the distance under the Lee Bridge. 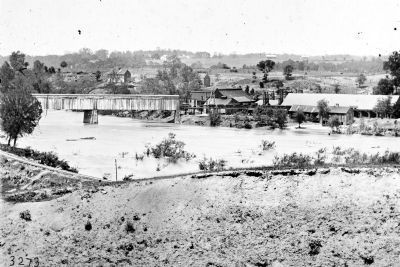