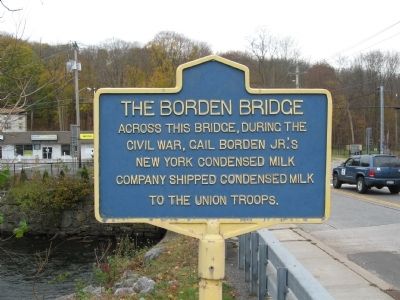 Location. 41° 23.69′ N, 73° 36.434′ W. Marker is in Brewster, New York, in Putnam County. Marker is at the intersection of Main Street (U.S. 6) and Peaceable Hill Road, on the left when traveling east on Main Street. Touch for map. Marker is in this post office area: Brewster NY 10509, United States of America. Touch for directions.

Regarding The Borden Bridge. 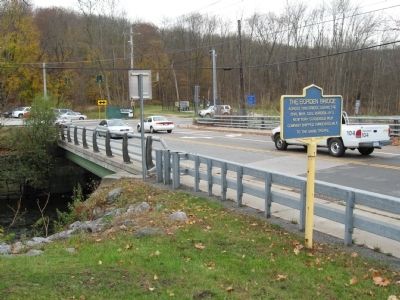 By Michael Herrick, November 10, 2009
2. The Borden Bridge Marker
In 1864, Gail Borden constructed a milk condensery at the juncture of Routes 6 & 22. The New York Milk Condensery was the largest and most advanced milk factory at that time.
A model of cleanliness and efficiency, it was Borden's first commercially successful plant. Demand for condensed milk was high due to the Civil War, and over 200 dairy farmers supplied 20,000 gallons of milk each day.

In 1879, the plant expanded and a new brick structure was erected around the existing wood building. Construction occurred while the plant continued its operations in the older structure.
The Borden factory flourished for over fifty years. Following construction of the Croton Reservoir System, which flooded much of the area's viable farmland early in the twentieth century, production at the plant ceased.

In 1935, the building was ravaged by fire. Today, only part of the main factory building and a small outbuilding remain of what was once one of Brewster's most important industries. 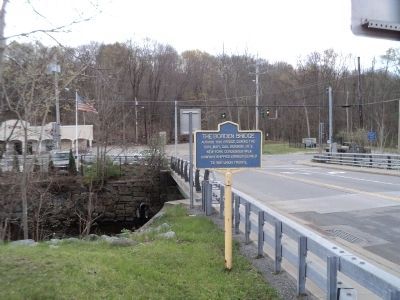