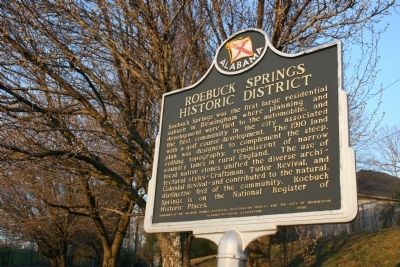 Roebuck Springs was the first large residential suburb in Birmingham where planning and development were tied to the automobile, and the first community in the city associated with a golf course development. The 1910 land plan was designed to complement the steep, rolling topography, reminiscent of narrow country lanes in rural England. The use of local native stones unified the diverse architectural styles - Craftsman, Tudor Revival, and Colonial Revival - and contributed to the natural, distinctive feel of the community. Roebuck Springs is on the National Register of Historic Places. 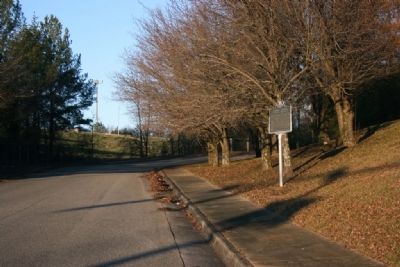 By Tim Carr
2. Roebuck Springs Historic District Marker
, on the right when traveling east. Touch for map. Marker is in this post office area: Birmingham AL 35206, United States of America. Touch for directions.

Other nearby markers. At least 8 other markers are within 3 miles of this marker, measured as the crow flies. Wilson Chapel And Cemetery (about 600 feet away, measured in a direct line); Roebuck Spring (approx. ¼ mile away); Zion Memorial Gardens (approx. 1.2 miles away); East Lake Park (approx. 1.3 miles away); Ruhama Baptist Church (approx. 1½ miles away); Howard College (approx. 1.8 miles away); East Lake Community (approx. 1.9 miles away); CDR "Snuffy" Smith (approx. 2.2 miles away). Touch for a list and map of all markers in Birmingham.
Credits. This page was last revised on July 25, 2018. It was originally submitted on January 20, 2010, by Timothy Carr of Birmingham, Alabama. This page has been viewed 1,896 times since then and 55 times this year. Photos:   1, 2. submitted on January 20, 2010, by Timothy Carr of Birmingham, Alabama. • Bill Pfingsten was the editor who published this page.
Share This Page.