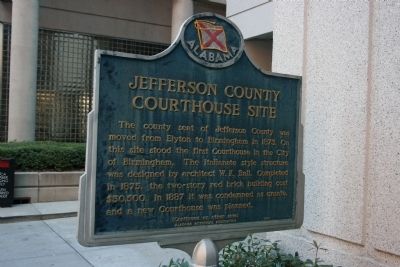 The county seat of Jefferson County was moved from Elyton to Birmingham in 1873. On this site stood the first Courthouse in the City of Birmingham. The Italianate style structure was designed by architect W. K. Ball. Completed in 1875, the two-story red brick building cost $30,500. In 1887 it was condemned as unsafe, and a new Courthouse was planned.

Reverse:
In 1889 a second Jefferson County Courthouse was constructed on this site. Charles Wheelock and Sons of Birmingham and H. Wolters of Louisville were the architects. Charles Pearce of Indianapolis was contractor. Constructed in the Richardsonian Romanesque style, the four-story brick building had a central clock tower rising 180 feet. Total cost was $300,000. This Courthouse served Jefferson County until 1931 when a new Courthouse was built several blocks to the north. The structure was razed in 1937.

Topics. This historical marker is listed in these topic lists: Government & Politics • Landmarks. 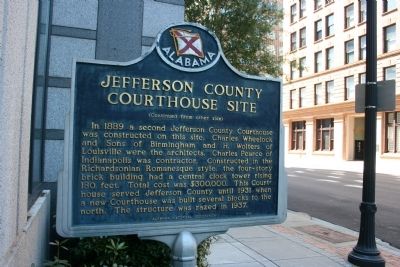 Other nearby markers. At least 8 other markers are within walking distance of this marker. Concord Center (a few steps from this marker); Title Building (within shouting distance of this marker); Dewberry Drugs and Phenix Insurance Company Buildings (about 600 feet away, measured in a direct line); The Berry Project (about 600 feet away); Clark Building (about 700 feet away); Temple Wilson Tutwiler, II / Tutwiler Hotel (about 700 feet away); S. H. Kress Five-And-Ten Cent Store (approx. 0.2 miles away); Civil Rights Freedom Riders (approx. 0.2 miles away). Touch for a list and map of all markers in Birmingham. 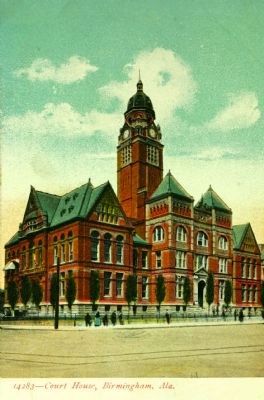 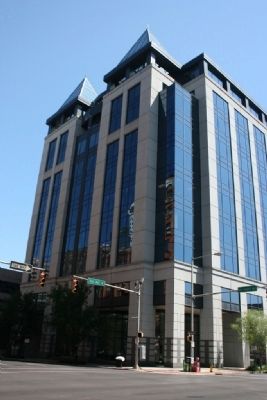