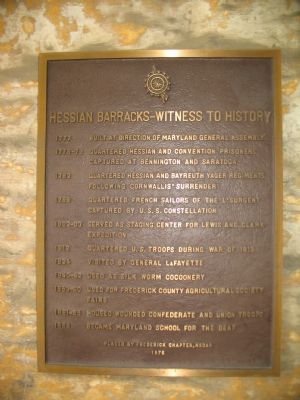 1799 Quartered French sailors of the L'Surgent captured by U.S.S. Constellation

1802-03 Served as staging center for Lewis and Clark Expedition

1868 Became Maryland School for the Deaf

Topics and series. This historical marker is listed in these topic lists: Education • Notable Buildings • War of 1812 • 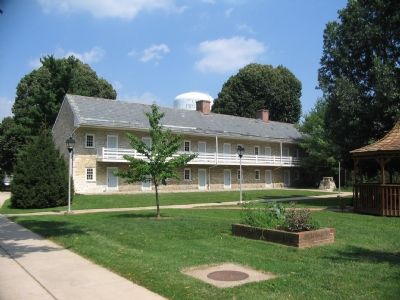 Photographed By Craig Swain, September 3, 2007
2. Hessian Barracks
The marker is on the wall of the wing behind the cannon fragment to the right of the picture.

Click or scan to see
this page online
War, US Civil • War, US Revolutionary. In addition, it is included in the Daughters of the American Revolution (DAR), and the Lafayette’s Farewell Tour series lists. A significant historical year for this entry is 1777.

Location. 39° 24.539′ N, 77° 24.578′ W. Marker is in Frederick, Maryland, in Frederick County. Marker can be reached from Clarke Place, on the right when traveling west. Located on the old Hessian Barracks building inside the Maryland School for the Deaf campus. Touch for map. Marker is at or near this postal address: 101 Clarke Place, Frederick MD 21701, United States of America. Touch for directions.