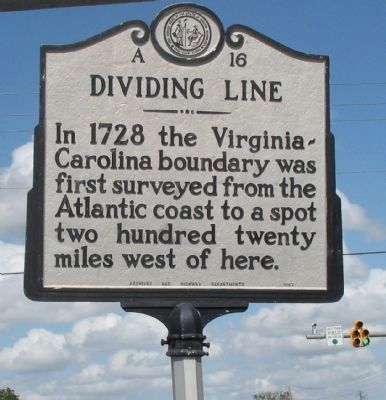 By Laura Troy, October 1, 2007
1. Dividing Line Marker
Inscription.
Dividing Line. . In 1728 the Virginia-Carolina boundary was first surveyed from the Atlantic coast to a spot two hundred twenty miles west of here. . This historical marker was erected in 1967 by Archives and Highway Departments. It is in Moyock in Currituck County North Carolina

In 1728 the Virginia-Carolina boundary was first surveyed from the Atlantic coast to a spot two hundred twenty miles west of here.

Erected 1967 by Archives and Highway Departments. (Marker Number A-16.) 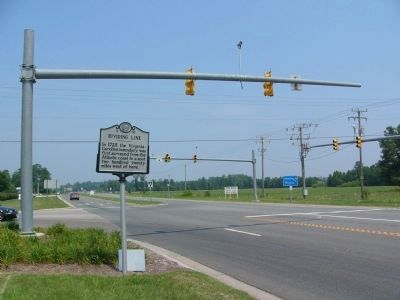 By Kevin W., July 22, 2008
2. Dividing Line Marker
Note the blue sign to the far left welcoming travelers into Virginia.
Virginia and North Carolina’s early settlers intermingled beginning around 1650, particularly in North Carolina’s northeastern or Albemarle region, where colonists trickled down in search of good land to grow crops and establish homesteads. In the early 1700’s, explorer John Lawson began surveying a boundary between Carolina and Virginia at the behest of the Lord Proprietors, but was unable to complete the task. Because many colonists easily traveled back and forth between the two, the border between North Carolina and Virginia was vague until Virginian William Byrd first surveyed the line in 1728. Byrd and other surveyors defined the line from the coast as far westward as modern Stokes County, about 240 miles.

The survey of the boundary between the two colonies was completed in 1749 when Thomas Jefferson’s father, Peter, began in Stokes County and completed the survey to what is now Ashe County. The borders were often disputed and additional surveys were called to settle claims, the most notable in 1887, when the two states sponsored another joint boundary survey.

While Byrd’s adventure is interesting in itself, the explorer and aristocratic planter published a journal of the expedition, The History of the Dividing Line Betwixt Virginia and North Carolina, where he wrote about places and people encountered while surveying the dividing line. In the alternate 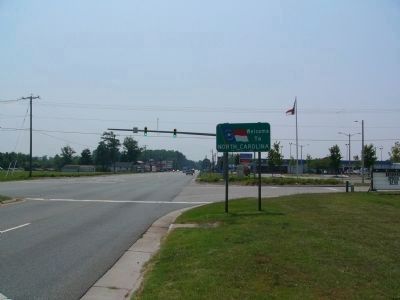 By Kevin W., July 22, 2008
3. Welcome to North Carolina
The Dividing Line Marker can be seen in the background.
version, titled The Secret History of the Line, Byrd candidly described the attitudes and abilities of men from both Virginia and North Carolina, tending to place the former over the latter. The unofficial account was only recently published, as Byrd’s frank descriptions of raw colonial life in his secret history deterred many publishing companies. Both versions of Byrd’s account are entertaining, and offer a rare and humorous glimpse into life and travel in colonial America.

copied from the North Carolina Department of Cultural Resources 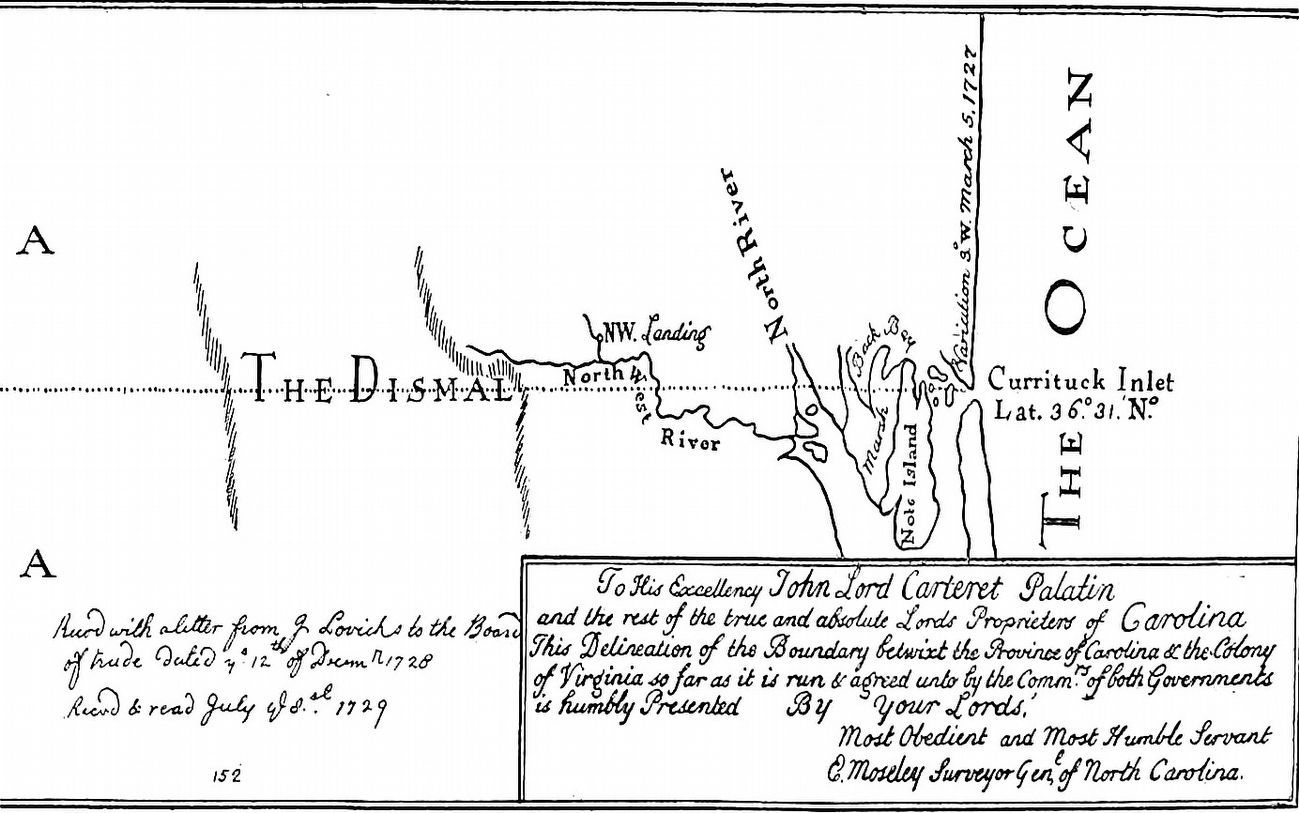 By Allen C. Browne
4. East End of the Dividing Line
The 1728 Survey of the Boundary between Virginia and North Carolina. The location of this marker seems to be on the east edge of the Dismal Swamp on his map.
From William Byrd's Histories of the Dividing Line, published 1929. 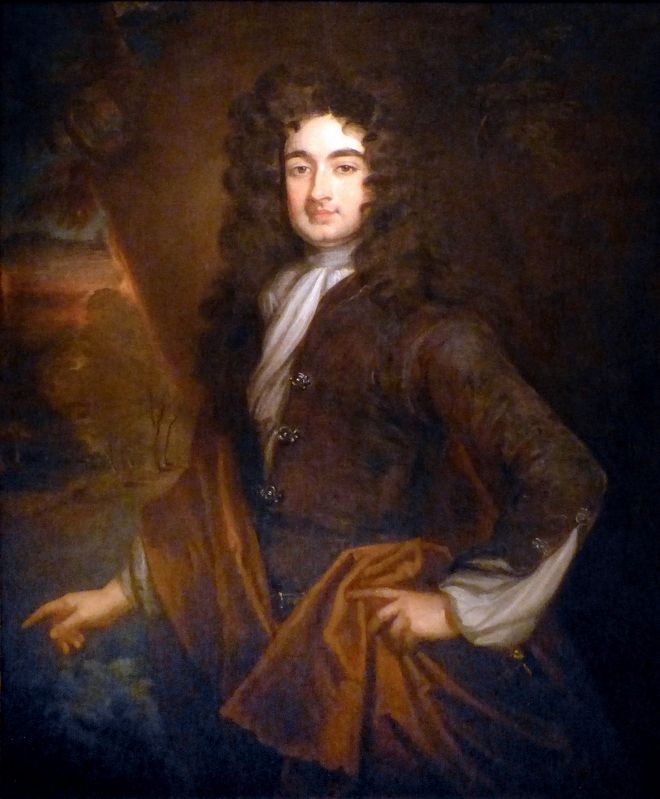 By Allen C. Browne, January 18, 2014
5. William Byrd II
This 1700-1704 portrait of William Byrd II (1674-1744) by Sir Godfrey Kneller hangs in the National Portrait Gallery in Washington, DC. "William Byrd II inherited a great deal of property In Virginia that, together with the force of his personality and his own accomplishments, made him one of the most prominent and powerful men in the colony. He was educated and practiced law in England and traveled extensively there and on the Continent. Before returning to America, he commissioned this stylish portrait by Sir Godfrey Kneller, the principal painter to the British monarch. Byrd was a successful tobacco planter and served for many years on the Virginia Council. In 1728 he played a lead role in surveying the Virginia-North Carolina boundary line. One result of this work was Byrd's book, The History of the Dividing Line Run in the Year 1728, a colorful account of Virginia's history and its flora and fauna. Late in life he built Westover, a Georgian mansion on the James River, where he housed his collection of thirty portraits of family and other persons of note." -- National Portrait Gallery
More. Search the internet for Dividing Line.