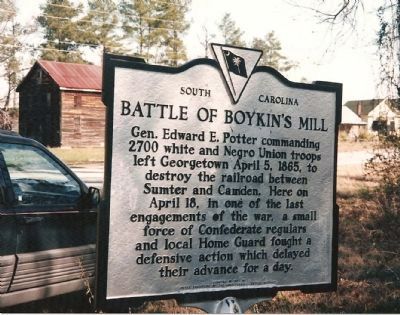 Photographed By Craig Swain, circa 1994
1. Battle of Boykin's Mill Marker
On the opposite side of the road from the marker is a post war mill building.
Inscription.
Battle of Boykin's Mill. . , Gen. Edward E. Potter commanding 2700 white and Negro Union troops left Georgetown April 5, 1865, to destroy the railroad between Sumter and Camden. Here on April 18, in one of the last engagements of the war, a small force of Confederate regulars and local Home Guard fought a defensive action which delayed their advance for a day. . This historical marker was erected in 1967 by United Daughters of the Confederacy, Central District. It is Near Rembert in Kershaw County South Carolina

Gen. Edward E. Potter commanding 2700 white and Negro Union troops left Georgetown April 5, 1865, to destroy the railroad between Sumter and Camden. Here on April 18, in one of the last engagements of the war, a small force of Confederate regulars and local Home Guard fought a defensive action which delayed their advance for a day.

Topics and series. This historical marker is listed in these topic lists: African Americans • War, US Civil. In addition, it is included in the United Daughters of the Confederacy series list. A significant historical date for this entry is April 5, 1733.

Location. 34° 7.844′ N, 80° 34.854′ W. Marker is near Rembert, South Carolina, in Kershaw County. Marker is at the intersection of Boykin Road (State Highway 261) and Boykin Mill Road, on the left when traveling south on Boykin Road. Near Kershaw - Sumter county line. Touch for map. Marker is in this post office area: Rembert SC 29128, United States of America. Touch for directions.

Other nearby markers. At least 8 other markers are within 8 miles of this marker, measured as the crow flies. Burwell Boykin / Battle of Boykins Mill 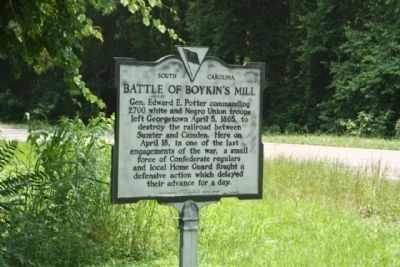 Also see . . .
1. Battle of Boykin's Mill. A detailed discussion of the battle. Two rather noteworthy units were involved in the battle. The Confederate forces comprised mostly of the famous Kentucky "Orphan Brigade." And on the Federal side was the equally famous 54th Massachusetts Infantry. Killed in the action was Lieutenant E. L. Stevens, the last Union officer to fall during the war. (Submitted on September 4, 2008, by Craig Swain of Leesburg, Virginia.)

2. The Role of the 54th Massachussetts in Potter's Raid. Captain Emilio called this action at Boykins Mill the "last fight of the Fifty-fourth." The charge of the 54th coincided with the advance of the 102nd USCT and the 107th Ohio. (Submitted on September 4, 2008, by Craig Swain of Leesburg, Virginia.) 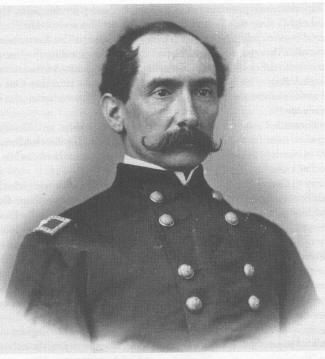 Photograph from Massachusetts Commandery Collection, circa 1861
3. Gen. Edward Potter
Brig. Gen. Edward E. Potter was responsible for executing General Foster's planned raid on Greenville, Rocky Mount, and Tarboro. A native of New York, Potter enlisted as a captain (February 3, 1862), was appointed lieutenant colonel (October 1, 1862), and was then raised to brigadier general (November 29, 1862).
1. About the Battle of Boykin's Mill
Sherman suspecting that Confederate supplies were being hidden in the swamps south of Camden, and although the war was obviously winding down in early April 1865, he worried that pockets of resistance could continue if the supplies reached Confederate troops. Sherman ordered the Union commander at Hilton Head to find and destroy any remaining railroad cars and locomotives in South Carolina. Union Brig. Gen. Edward E. Potter was given two brigades of troops, about twenty-six hundred men, and ordered to move inland from Georgetown, South Carolina. One of the brigades was made up of Black soldiers, including the remaining veterans of the 54th Mass. and the 32nd U.S. Colored (formerly the 1st S.C. Volunteers, the first Black regiment raised from freed slaves.)

There were very few Confederate troops available to stop Potter's Federals. At Dingle's Mill, a few miles below Sumter, a force of 575 militiamen and home-guard troops threw up some earthworks at the creek. They dragged three obsolete cannons to the works and did their best to barricade themselves in for the fight. Potter's men clashed with the Confederate defenders on April 9, 1865, the day Lee surrendered at Appomattox. The two Confederate officers who knew the most about artillery were killed. When they fell, the militia scattered, and all 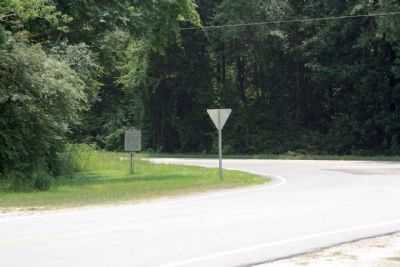 For a week, Potter followed his orders, searching the swamps for trains. On April 17, Potter and his men moved to Camden, doing some damage to houses and stores. The next day, he moved back south toward Manchester, South Carolina, where he heard a large number of cars and locomotives were hidden. On their way, the Federals ran into a thrown-together force of about 250 home guards and recovering wounded at Boykin's Mill.

This Confederate force had one purpose: to try to slow the Federal advance so the railroad cars could be moved. The Confederate commander, Col. A.D. Goodwyn, who was home recovering from a wound, chose his defenses well. He put his troops behind a swamp and a mill pond. The only way the Federals could attack was along a narrow road that the Confederates covered with their two cannons. To make the swamp even more difficult for the Federals, Goodwyn released some water into it from the mill pond.

The Federals tried to slide alongside the pond's dam, where the ground was drier, but Confederate sharpshooters in rifle pits beside a church on high ground shot them down as they neared the mill. for six hours, the Confederates held the pond and the road, until the Federals were guided to a crossing around the pond, well out of the range of the Confederate muskets. Once they were flanked, the Confederates 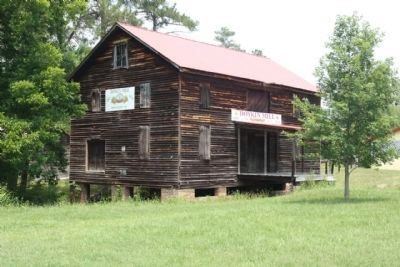 At least twenty-two Federals were killed, including the last Federal officer killed in the war, Lt. Edward L. Stevens of the 54th Mass. Regiment. Stevens may have been smart enough to attend Harvard, but he was not smart enough to know that you do not stay astride your horse in full view of Confederate sharpshooters. He was picked off by a rifleman stationed at the church. (Source: Touring the Carolinas' Civil War Sites, Clint Johnson, pgs. 341-343.)
— Submitted March 1, 2009, by Brian Scott of Anderson, South Carolina. 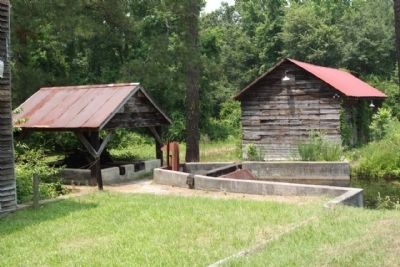 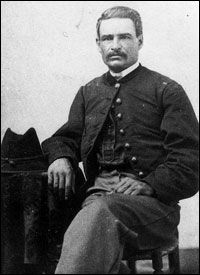 Photographed By Wikipedia
7. Lt. Stephen Swails, 54th Massachusetts Volunteer Infantry
In recognition of his heroism at the Battle of Olustee in February 1864, then-1st Sgt. Stephen A. Swails was commissioned a second lieutenant by John Andrew, governor of Massachusetts, on March 11, 1864, becoming the famed regiment's first Black (bi-racial) commissioned officer. Wounded in action for a second time at Boykin's Mill, the War Department did not endorse his promotion until April 28, 1865, a few days after the battle. The native New Yorker moved to South Carolina after the war and served for several years during Reconstruction as a publisher, a state senator and the mayor of Kingstree - until he was forced out of politics in the post-Reconstruction era of Black disenfranchisement.
Click for more information. 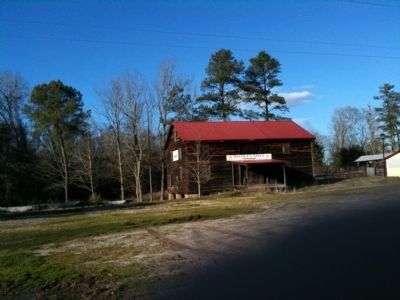 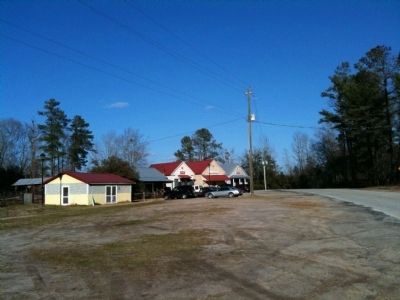 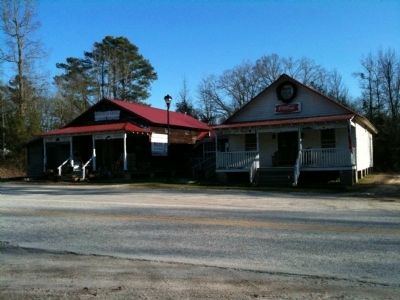