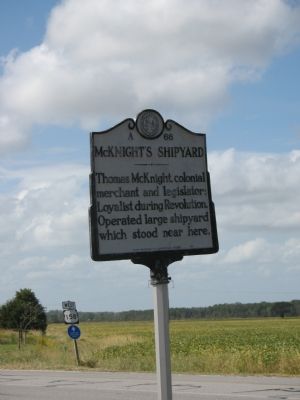 By Laura Troy, October 1, 2007
1. McKnight's Shipyard Marker
Inscription.
McKnight’s Shipyard. . Thomas McKnight, colonial merchant and legislator; Loyalist during Revolution. Operated large shipyard which stood near here. . This historical marker was erected in 1971 by State Department of Archives and History. It is in Shawboro in Currituck County North Carolina

Erected 1971 by State Department of Archives and History. (Marker Number A-66.)

Location. 36° 22.643′ N, 76° 5.184′ W. Marker is in Shawboro, North Carolina, in Currituck County. Marker is at the intersection of Shortcut Road (U.S. 158) and Indiantown Road, on the right when traveling east on Shortcut Road. Touch for map. Marker is in this post office area: Shawboro NC 27973, United States of America. Touch for directions.

Regarding McKnight’s Shipyard. Proclaimed by its owner “the most commodious, and . . . best shipyard in the province” with “large warfs and convenient warehouses,” McKnight’s shipyard was located on the Indiantown Creek area of the north side of the North River, which is the boundary between Currituck and Camden counties. Specific details as to the McKnight’s establishing the shipyard are lacking, but it was in operation during the colonial period. It was closed in 1775 when McKnight fled to Virginia due to local hostilities and an assassination attempt related to his very public Loyalist convictions. British Loyalist claims made by Thomas McKnight provide important information as to the size and scope of his shipbuilding operation. In one passage he recalls “From this yard I have launched a ship (one hundred feet long) into fourteen feet of water, upon sliding boards not more than thirty in length, the whole run did not exceed twenty-five feet; and from the top of the keel blocks to the surface of the water was a fall of little more than two feet.”

Little is known about Thomas McKnight’s life before he appears in North Carolina public records in 1757. He was a native of Scotland who settled in the Albemarle region and also owned property in the Cape Fear area. Aside from his shipbuilding business, McKnight organized a significant shingle-making operation in 1757, utilizing the Albemarle’s abundant juniper and cypress trees. He also became a wealthy planter, living on an 8,000-acre plantation called Belville in Currituck County. McKnight served in the North Carolina General Assembly in 1762, 1771, 1773 (both sessions), and 1775. He was nominated for the Council in 1775, described by Governor Josiah Martin as a “gentleman of character . . . of greatest weight and abilities.” At the 1775 Provincial Congress, McKnight was the only member who refused to sign the declaration commending the work of the Continental Congress at Philadelphia. With many enemies in his home state, he escaped to Virginia in 1775 but returned to North Carolina in 1776. Later in the year he fled to England where records of his Loyalist claims provide information about his life, including his shipyard, in North Carolina through details of his losses.