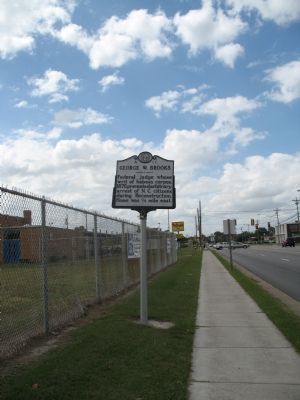 By Laura Troy, October 1, 2007
1. George W. Brooks Marker
Inscription.
George W. Brooks. . Federal judge whose writs of habeas corpus, 1870, prevented arbitrary arrest of N.C. citizens during Reconstruction. Home was ¼ mile east. . This historical marker was erected in 1959 by Division of Archives and History. It is in Elizabeth City in Pasquotank County North Carolina

Erected 1959 by Division of Archives and History. (Marker Number A-54.)

Topics. This historical marker is listed in this topic list: Civil Rights. A significant historical year for this entry is 1870.

Click or scan to see
this page online
half a mile away); World Wars I and II Memorial (approx. half a mile away). Touch for a list and map of all markers in Elizabeth City.

Regarding George W. Brooks. George W. Brooks, lawyer and U. S. District Court Judge, was widely recognized for his eminent sense of fairness, but will be remembered primarily for his role in ending the “Kirk-Holden War.” Born in 1821 to William C. and Catherine B. Brooks of Pasquotank County, Brooks attended school in Gates and Perquimans counties. Unable to afford college, Brooks read law in Elizabeth City. He received his license to practice law in 1844, entering the profession almost penniless. Through persistent work Brooks built a strong legal career and accumulated a sizable personal estate.

Brooks served in the General Assembly in 1852. An ardent anti-secessionist, he was a noncombatant during the Civil War. In August 1865 President Andrew Johnson appointed Brooks federal district court judge for the District of North Carolina. He was also an influential member of the state’s constitutional convention of 1865–1866. In 1870 Governor William Woods Holden sought to suppress Ku Klux Klan activities in the Piedmont. Holden placed Alamance and Caswell counties under martial law, with Colonel George W. Kirk of Tennessee in command of the state militia. Kirk arrested numerous prominent men. No hearings were held and Holden denied writs of habeas corpus.

In time the defendants got former Confederate General Matt W. Ransom to petition Judge Brooks for the release of the prisoners under the newly adopted Fourteenth Amendment. Brooks issued writs and ordered Kirk to present the prisoners to him at Salisbury. When Kirk was unable to provide evidence against the men, Brooks released them, effectively putting an end to the conflict that was known as the “Kirk-Holden War.” When North Carolina was divided into two federal judicial districts in 1872, Brooks became the judge for the Eastern District. He continued in the position for the remainder of his life. Brooks died on January 6, 1882 and was buried in Old Hollywood Cemetery in Elizabeth City.